In a reflecting telescope (Cassegrain), is there a difference between using a concave or convex secondary mirror?

These are two diagrams of Cassegrain reflecting telescopes.

One uses a concave secondary mirror, and the other uses a convex one.

Is there any difference between the two?

For example, does one cost more? Does one produce a better image?

EDIT: These images came from: 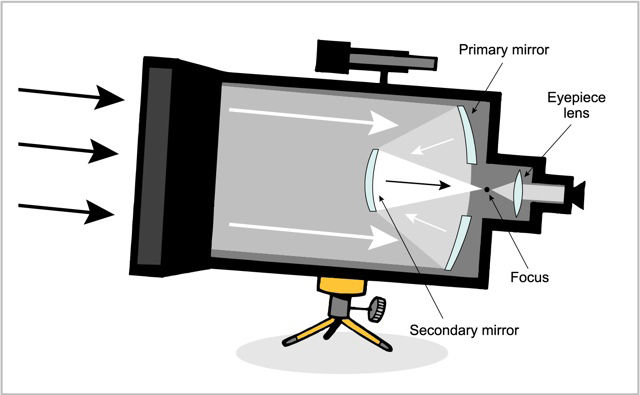 There are many flavors of reflecting telescopes based on the original Cassegrain design which has been attributed by history to Laurent Cassegrain:

The Cassegrain reflector is named after a published reflecting telescope design that appeared in the April 25, 1672 Journal des sçavans which has been attributed to Laurent Cassegrain. Similar designs using convex secondaries have been found in the Bonaventura Cavalieri's 1632 writings describing burning mirrors and Marin Mersenne's 1636 writings describing telescope designs. James Gregory's 1662 attempts to create a reflecting telescope included a Cassegrain configuration, judging by a convex secondary mirror found among his experiments. (from here; emphasis added)

However, a Gregorian Telescope does indeed use a concave secondary mirror, placed after the primary focus. The diverging beam is then re-imaged behind the primary. According to Wikipedia, examples of Gregorian telescope designs in use include:

Advantages of the Gregorian include the option of putting a field stop at the primary focus, helpful when viewing near bright, interfering sources of light, and providing an upright, non-inverted image.

In either the convex/Cassegrain-type or concave/Gregorian type of system, the curved secondary mirror provides several important advantages, including:

The cartoon illustration shown in the Canada under the stars website shows a meniscus with it's concave side used as a reflector. I think this is just an error by the illustrator. It wouldn't make sense to show a Gregorian telescope in a paragraph about Laurent Cassegrain, and the primary focus does not fall in front of the secondary.

I've tilted the drawing so that the optical axis is horizontal, and highlighted the incoming and reflected rays of light striking the top edge of the secondary. You can see that the reflected ray is more parallel to the axis, which would only happen if the mirror were convex. The very large distance between the lens of the eyepiece, and the actual location of the exit for one's eye confirms that some artistic license has been taken with the optics here.

For reference, look at the realistic drawing of a Cassegrain optical system from Wikipedia shown below.

The drawing from the "A-level Physics Tutor" website is also problematic, showing the primary focus far in front of the primary mirror of an optical telescope, followed by an eyepiece lens with the same diameter as the secondary mirror. Again this is artistic license, but there's no excuse for it in a proper physics tutorial.

There are examples of optical telescopes where the secondary mirror is so strongly convex that the light then becomes divergent, expanding toward the primary before being refocused (made convergent again) by a tertiary mirror, such as the (crazy/beautiful) Large Synoptic Survey Telescope. See also LSST Optical Design. 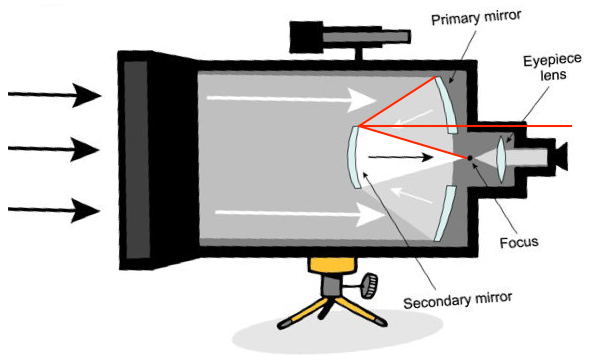 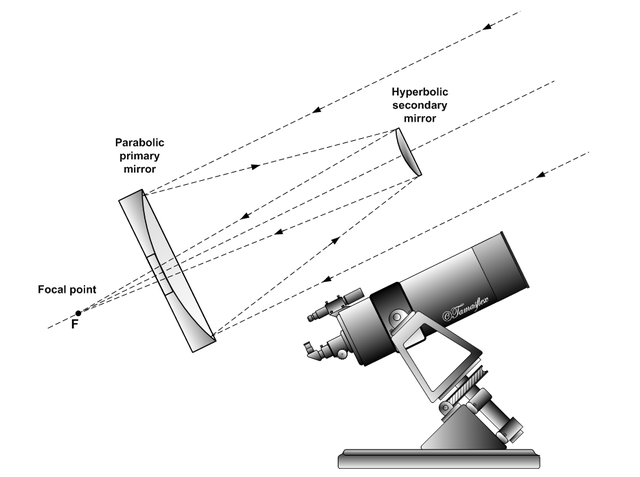 above: Drawing of a Cassegrain reflecting telescope, from here. 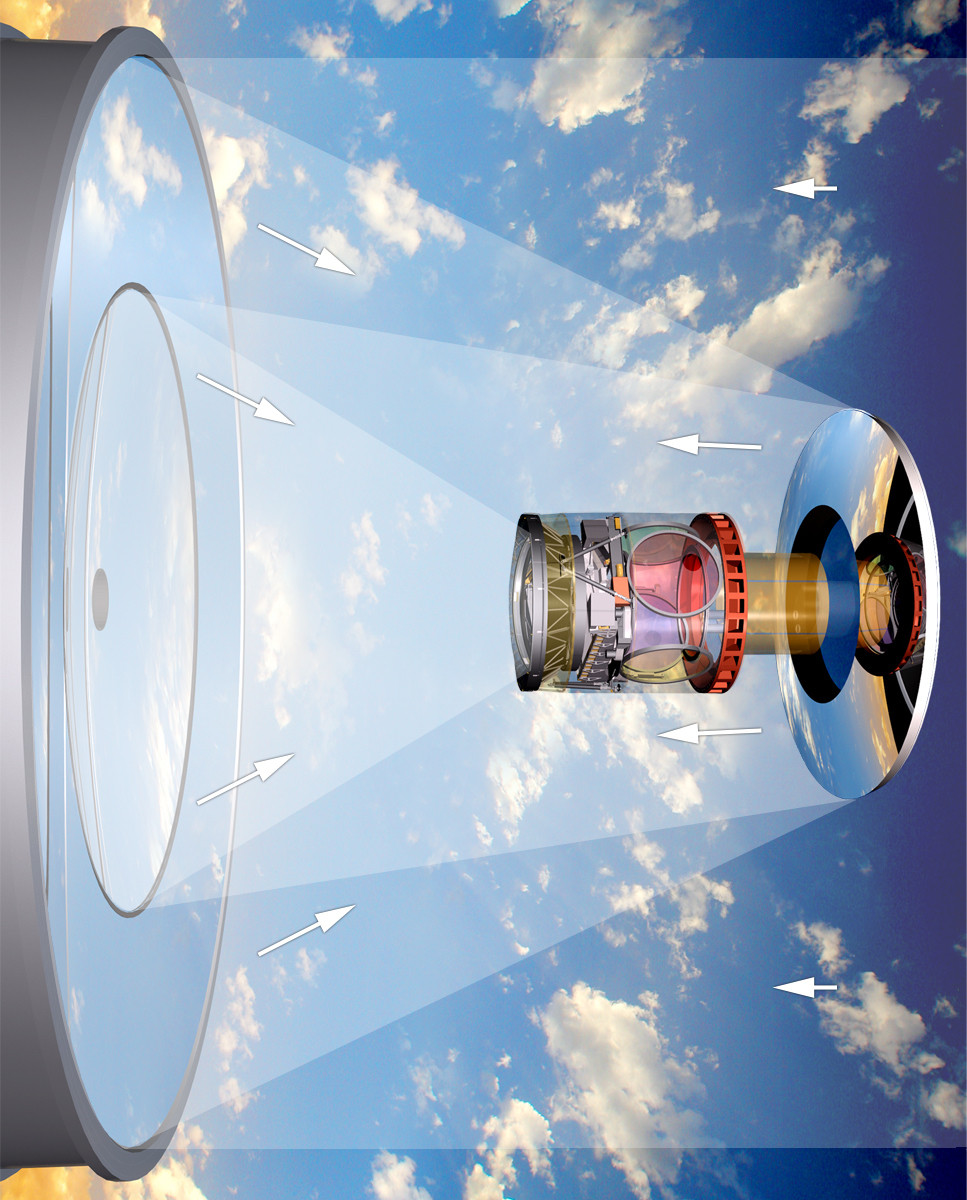 above: Illustration of the optical system of the Large Synoptic Survey Telescope, from here (rotated).

5
Claim that 30-m class telescopes will have resolution far superior to Hubble: true?
4
Am I using my Celestron 8 Schmidt-Cassegrain telescope correctly?
3
Telescope choice
4
Constructing a periscope/telescope - trouble with lenses
7
Where exactly is the modification that first corrected the spherical aberration in Hubble's primary mirror?
6
Angular diameter of the Sun's reflection from the ocean, seen from Sun-Earth L1?
6
How would a Fast Fourier Transform Telescope work without a mirror, dish or lenses?
2
Difference between first (focal length (fl.) 500 mm, ocular (o.) 10 mm) and second telescope (fl. 1000 mm, o. 20 mm)? (both 50 x)