What would a gas giant consisting of only earths atmosphere look like? [closed]

Putting aside how such a planet could be formed and just lets assume it exists.

What would an gas giant "look" like if it just consisted of the gas compound earths atmosphere consists of.

Could we just watch through it? Would we see a burning core and therefore see something like a dim star? Or would there be still causes that would block vision, even if there were no other components included?

And would such a planet be able to hold it self together?

Jupiter's atmosphere, if you could see through it, the inside of the planet would begin to glow visibly red from heat perhaps a couple/few thousand miles below it's upper clouds. 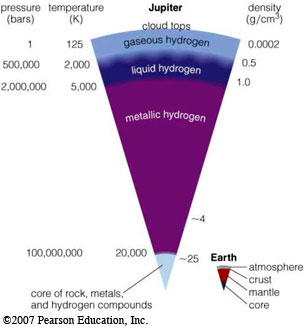 The problem is, some two thousand miles of atmosphere above that visible glow is almost certainly well past the point of transparency. Add to that, mixing and cloud formation would make seeing through all that impossible - no matter what the atmosphere was made of.

Hot gas rises and as it rises, some gas condenses from gas into liquid droplets (clouds), but these clouds form in updrafts so even though they start falling back towards the planet, the thick atmosphere and the updraft movement maintains the clouds for some time. There's different layers of clouds too. Jupiter's upper most clouds are Ammonia, but below that there's water clouds (and perhaps others). go deep enough you might get sulfur clouds (I'm not sure) or more dense hydrocarbon (gasoline like) clouds.

An atmosphere that thick maintaining transparency is impossible. Hydrogen and Helium are (to my knowledge) just as transparent as Oxygen and Nitrogen, maybe more, but the mixing and condensation gives Jupiter a constant cloud cover, different colors mostly represent different temperatures and depths from which that gas came from.

If you gave Jupiter an Oxygen-Nitrogen atmosphere but maintained it's inner core, the inner hydrogen would rise and mix with the Oxygen-Nitrogen. Chemistry would inevitably happen and the Oxygen would bind with the hydrogen and make water. Some of the Nitrogen would probably form Ammonia and in the end, Jupiter might not look that different. Initially it might have a bluish tint, but only temporarily. It would likely always have clouds and mixing some heavier/darker gases from below. You'd never see it's core, no matter what.

Now if you had a planet with only one gas in it's atmosphere and entire makeup - avoiding any chemistry, say a planet made entirely of hydrogen or entirely of Argon or Oxygen - then you might get specific colors relating to the specific element. But such planets are pure fantasy.

My best guess is that Jupiter's appearance wouldn't change much if you gave it an Earth-like atmosphere, but Jupiter is basically made of gas, so if you did that, it would just mix and it's inner hydrogen would rise to the top and Oxygen-nitrogen would sink. It's the trace gases that give Jupiter it's color anyway, not it's hydrogen.

Jupiter's atmosphere is mostly Hydrogen, lying over liquid Hydrogen, on top of metallic Hydrogen, and finally at the center a large rocky core. As you remove the hydrogen atmosphere the liquid would turn to gas, metallic to liquid, and on and on until all the hydrogen were gone and you have a massive core left approximately 12 to 45 times the mass of Earth. (Not much is known about the core.) So if you had only the rocky core, cooled down from it's current temperature of 36,000K, and added a nitrogen/oxygen Earth like atmosphere, you could see the bottom in an Earth like way.

It would not be a dim star, though it would glow very hot until it cooled, and also the planet would hold together.

2
What would happen to a gas planet if its core mass goes beyond the Chandrasekhar limit?
1
What elements and compounds would be present in a red gas giant?
2
Would a spacecraft just go "through" a gas giant?
2
What percentage of gas giant exoplanets are in the habitable zone?
8
If the fifth gas giant in the early Solar System was completely ejected, where would it be now?