Tidal locking of a moon [duplicate]

Ask Question
Asked 4 years, 4 months ago
Active 3 years, 11 months ago
Viewed 656 times
4
$\begingroup$
This question already has answers here:
Is there any residual oscillation left from the Moon rotation? (4 answers)
Closed 4 years ago.

When a moon is in orbit around it's planet but is so close that it will become tidally locked does it experience a large 'wobble' in between the phase when it still has its own rotation and the final phase when it is always showing the same face to the planet? I can only imagine that it would 'wobble' very widely, back and forth like a pendulum until finally settling into a locked position.

There's no back and forth motion on the way towards tidal locking. There's kind of two ways to look this kind of "settling", there's overshooting and correction, basically a back and forth, and there's a very gradual force that grows smaller, basically moving towards zero but not overshooting. I realize that's just re-writing your question, but it helps to understand the 2nd option.

I'll use the Earth as an example, because the Earth is in the gradual process of becoming tidally locked to the Moon. It's the same process, but easier to visualize.

It's the size of the bulge and the angle of the offset (and the mass and distance of the Moon) that causes the familiar gravitational effects, the Earth's rotation slowing down and the Moon moving away from the Earth. 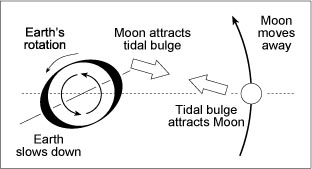 The current angle of offset for the Earth's tidal bulge to the Moon is about 3 degrees, often exaggerated in diagrams so it's easier to see. (I should find a source for that - I've not been able to find a good one).

From the Moon's point of view (and if we assume a circular orbit), the tidal offset stays in the same place. It's a factor of the relative rotation speed. As Earth slows down, the angle of offset will move towards zero. At tidal locking, the angle of offset becomes zero and there's no force to continue in the other direction. In a simple mathematical model, tidal locking wouldn't ever happen completely, it would just gradually get closer and closer, like an object shot from the Earth at exactly escape velocity.

In reality, because objects aren't perfectly symmetrical and because orbits aren't perfectly circular, the "take forever to get to zero", doesn't happen. But it's still a gradual approach to zero and no overshooting and returning because the force on the rotation approaches zero as the angle of offset approaches zero and the force needed to change a planet's rotation is enormous and there's essentially zero force to make that happen.

With more eccentric orbits, like Mercury and it's 3:2 rotation to orbit resonance, that might be different. Not sure how eccentricity might play into this. That's more complicated.

Not the answer you're looking for? Browse other questions tagged tidal-locking or ask your own question.

8
Is there any residual oscillation left from the Moon rotation?
5
What causes objects to become tidally locked?

8
Is there any residual oscillation left from the Moon rotation?
1
Are exoplanets at dwarf stars less likely to have super-rotating atmospheres or asynchronous tidal locking?
5
A "tidally locked" double planet?
8
Eventual outcome of tidal acceleration and deceleration
5
Is there any planet or satellite in the solar system in the process of getting tidally locked?
14
Shouldn't tidal locking be impossible for a satellite that has a considerably eccentric orbit?
2
Does tidal locking also slowly reduce the orbiting body's axial angle?
3
How close to a host star can a tidally locked planet be and its dark side still maintain a moderate temperature?