Term for the moment when hydrogen fusion begins in a star

I have read of this process many times, but I don't think I know the term specifically for the moment when hydrogen fusion begins. What is this moment called?

Ignition or more fully Stellar ignition is the term you want.

In actual fact there is no "moment" when the star begins to fuse hydrogen, it is a gradual process. 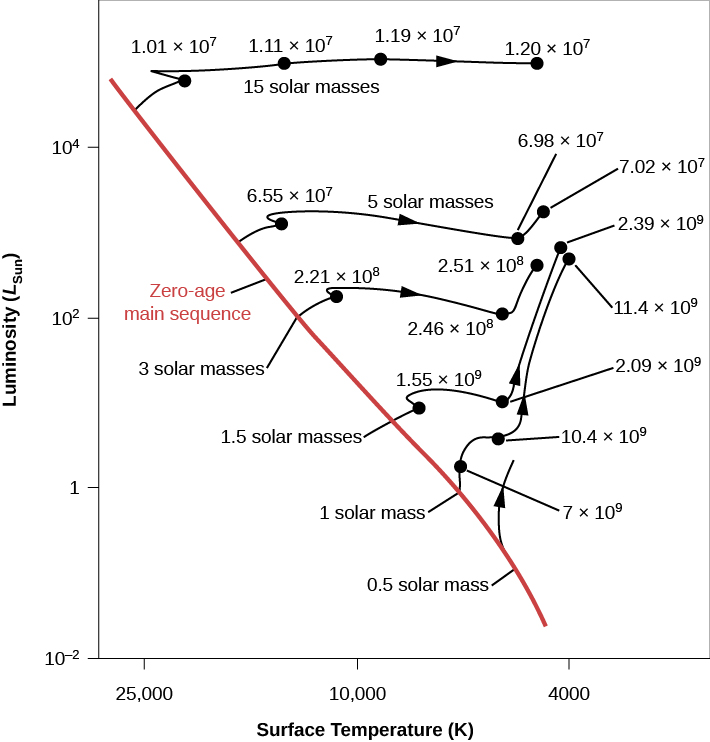 Picture from Evolution from the Main Sequence to Red Giants, courtesy of Rice University under a Creative Commons Attribution License 4.0.

Some astronomers consider the ZAMS to be the "birth" of a star, in the sense that the object is no longer a protostar and meets the criteria of a star (source). These astronomers thus consider a star's age to be the time between now and its ZAMS. However, this is simply a matter of terminology, as others consider the formation of the star to be the moment when its molecular cloud collapses.

Not the answer you're looking for? Browse other questions tagged star-formation terminology or ask your own question.

7
Mechanism for Brown Dwarf Fusion
6
The defintion of star/planetary/solar system
2
What is the minimum size of a ball of gas to become a star?
4
What is the largest hydrogen-burning star?
0
Term for altitude of the sun?
1
Term for the period between planet alignments?
3
How do we calculate heat flow or cooling rate for no fusion brown dwarf star?
3
The sun “burns” hydrogen and even has “campfires” on it, but has anyone calculated a rate of actual chemical burning on the Sun?