How long was an early Earth year? [duplicate]

Ask Question
Asked 3 years, 9 months ago
Active 4 months ago
Viewed 763 times
2
$\begingroup$
This question already has answers here:
How has the Earth's orbit changed over hundreds of millions or billion of years? (3 answers)
Closed 3 years ago.

Roughly how long did it use to take for the early Earth 4.5~ billion years ago to complete one revolution around the Sun?

(I know the Earth was spinning much faster, so a day would only take 2-3 hours, so I'd like to have the answer in terms of current Earth days for better understanding - if possible.)

(I Google'd the heck out of this question and couldn't find an answer.)

There are two components to take into account for this question

A day back then was shorter than today's earth day. The earth was rotating quicker in the past, but its rotating period around the sun didn't change much because of Kepler's law.

I cannot say how it was 5 billion years ago (anyway, did the earth had something you could call a surface to track the day from then?), but you could find data derived from fossils analysis for the last billion years, e.g. here from Nasa's SpaceMath, on how long a day was back then - I realize now the figures below assume the orbiting period of the earth around the sun (~8766 hours) stayed constant over this period of time. This assumption is wrong as explained here - however stating it "has been close to its current value for the last 2-3 billion years", so below figures are an approximation 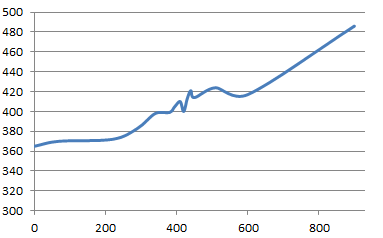 From which I would roughly interpolate: 600 days earth self-rotation per year full rotation around the sun 2 billion years ago 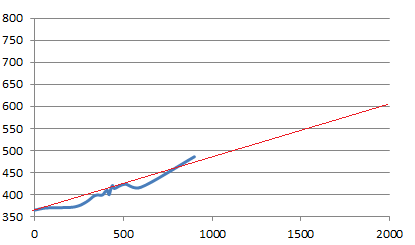 We are saying here that earth was rotating quicker in the past:

Detailed studies of fossil shells, and the banded deposits in certain sandstones, reveal a much different length of day in past eras! These bands in sedimentation and shell-growth follow the lunar month and have individual bands representing the number of days in a lunar month.

By counting the number of bands, geologists can work out the number of days in a year, and from this the number of hours in a day when the shell was grown, or the deposits put down. The table above shows the results of one of these studies.

Not the answer you're looking for? Browse other questions tagged the-sun earth or ask your own question.

5
How long until the Earth and Moon become a binary planet?
3
If there was air between the Sun and Earth, how warm would we get?
0
On the day of total solar eclipse why was early sunrise observed in India?
1
How long does it take the center of the Earth to complete a full orbit?
2
How was the distance from the Earth to the Sun determined
9
Historical Day Lengths on Earth
2
How Long Will Earth's Year be When Our Sun Goes Red?
4
How long is the Sun closer to Earth then Mars is?
0
Is a year really 365.24 days, or is it 365.2564 days like I remember?
2
How long was a lunar month in ancient times?