The formation of absorption lines in solar spectrum

It is said that absorption lines originate from regions higher in the photosphere where the gas is cooler.

My question is where are the photons produced by re-emission? Why are there absorption lines?

Although photons could be scattered, photons at other places could be scattered to our line our sight. Surely the total number of photons does not drop the further out you go? So while photons originally headed in the direction of an observer are possibly absorbed and re-emitted in a direction away from the observer, surely this will be made up for by a photon being emitted from another location in the direction of the observer? Otherwise wouldn't there be a location somewhere else where a bunch of extra scattered photons can be observed?

Are there less photons emitted from the surface C because some have been emitted back down into the Sun? But that has to reach an equilibrium, or there would be a cascading increase in the number of photons inside the sun. 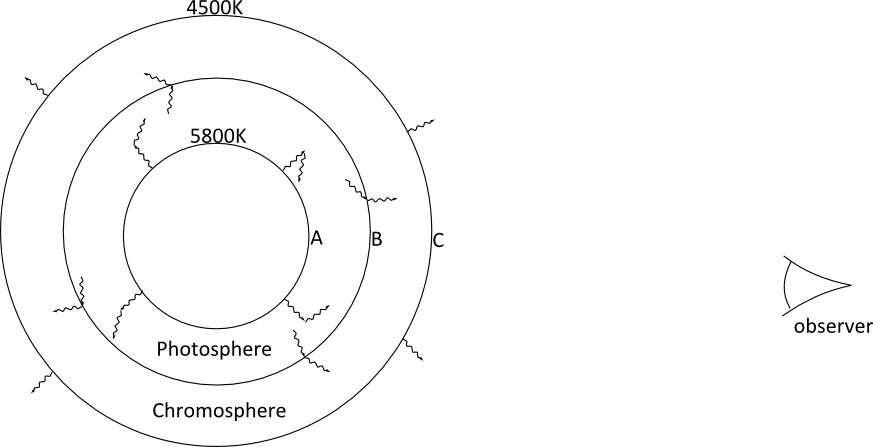 All the photons being emitted do not 'fill in the blank' of the absorption line, because when they are emitted, most do not come towards us. You suppose that there will be some emitted from a different hydrogen atom elsewhere, that will just happen to aim a photon at us, but where will it come from? Think about how much of the sky the Sun subtends from our perspective. Now think about how much of the sky the Earth subtends from the perspective of an atom of hydrogen in the Sun's photosphere that is thinking about popping a photon out and wondering if it will head in the direction of Earth. Here is a 2D diagram - bear in mind that the atom actually is in 3D space and instead of being limited to only 360 degrees, can pop that photon off in any direction at all.

So it doesn't matter where ANY of the hydrogen atoms are in the photosphere, they have next to no chance of actually hitting Earth with a photon that they emit. Even though there are a lot of them, they are ALL firing off photons in almost every direction EXCEPT towards Earth.

In the upper photosphere, the electrons join with the ions to neutralize the atom. When a photon strikes this atom (the atom absorbs the photon), it promotes a electron from a low energy shell to an higher energy shell. The electron then falls back to the lower energy shell emitting a photon in a different direction. When you break the sunlight into wavelengths (by a prism), you will see dark bands where the light was absorbed by the atoms and emitted in a different direction. These bands correspond to the energy absorbed and released when an electron changes energy shells. Here is the sun's light spread out to show the absorption bands.

Added: Here is a high resolution of the wavelengths from the sun.

Apr 20: You have the wrong interpretation of Figure 16.9. At level A, there is about the same number of photons at all wavelengths coming at the observer on Earth. As the photons pass through the Chromosphere, the photons with the wavelengths of the atom's electron transition are absorbed and redirected away from the observer. The photons with different wavelengths of the atom's electron transition eventually arrive at the observer. This is why there are dark lines in the spectrum. It is because most of the photons are absorbed and redirected in a different direction.

The absorption lines are formed at a higher region since the photons are removed from the spectrum.

Photons will only be absorbed by an atom or ion if they are of precisely the energy required to bump an electron up to an excited state. If they are not of the right energy, they pass unimpeded.

Photons of the right energy to be absorbed by a gas present in the photosphere, say hydrogen seeing as you have mentioned h-alpha, have a high probability of being absorbed by an atom on the way through the photosphere, and then being re-emitted in a random direction (including back down!)

According to the Stephan-Boltzmann Law for black bodies, the energy radiated per unit of surface area is related to the temperature of the black body. A black body that is cooler will be less bright than a black body that is hotter. So when photons are radiated from a cooler part of the photosphere, they will appear as dips in the spectrum.

Not the answer you're looking for? Browse other questions tagged the-sun radiation or ask your own question.

4
Solar System formation, considering its and the universe's age
3
Why does gravity increase in star formation?
3
Conceptual Doubt regarding the calculation of the Solar Constant
4
Solar visible light spectrum
1
What are the lines in this Solar Cycle graph?
2
absorption line from the chromosphere
5
Sun's spectrum red shift
5
How to calculate the time for the solar disk to pass the horizon and transit's lines
4
Can the Sun contain degenerate matter?
17
Problem regarding the absorption lines of the sun