What is the large astronomical instrument shown in this 1918 eclipse expedition photo?

This nice video musing about (among other things) the US Naval Observatory's $3,500 expedition to Baker City or at least Baker County Oregon to observe the June 18, 1918 solar eclipse, there is a photograph of the expedition showing both normal-sized portable telescopes, and in the background a very long telescope (at least 6 meters, can't see the end) held up by a ladder, with an even longer tent extending backward from the shack sitting at the bottom of the telescope along the ground.

What is this instrument? How does it function optically, and what kind of data does it produce?

below: Screenshot from the video, photo credits available at the end. 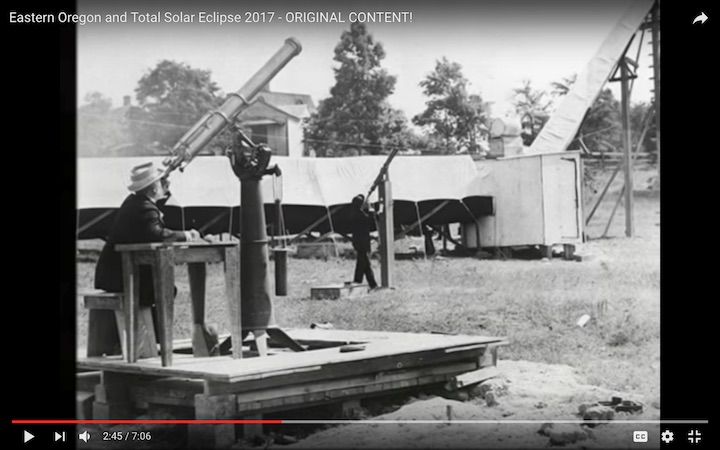 This construct was a telescope. Citing this article:

Owing to the difficulty of erecting a double tower, most other astronomers follow the mechanically simpler plan of laying the camera tube horizontally and allowing the sunlight to be fed into it by means of a plane mirror driven by clockwork to counteract the westward motion of the sun.
pg. 255

A Popular Astronomy article also discusses the eclipse observation in detail. They describe the primary telescopes used for photography. The first was a 65-foot telescope (that measurement being the length, not the aperture).

This instrument was in charge of W. A. Conrad, who was assisted by W. L. Veale. The camera was horizontal and was directed toward the sunrise point. Light from the corona was reflected from a silvered glass mirror 10 inches in diameter attached to a coelostat controlled by clockwork. The lens was 7 1/2 inches in aperture and the plates were double coated special coronal, 17x20 inches, made by the Eastman Kodak Co. The diameter of the sun's image on the plates is about 7 1/4 inches. Five exposures were made of 5, 15, 35, 15, and 5 seconds duration respectively.

They also had a 105-inch telescope which was also laid horizontally and had the light directed into it via a coelostat. While I can't be completely sure which telescope is pictured in that image, given the size, my guess would be the 65-foot telescope.

Not the answer you're looking for? Browse other questions tagged telescope solar-eclipse instruments or ask your own question.

16
Has anyone ever tried to make a simple telescope using ice?
11
What was the "brilliant new star in Aquila" on June 8, 1918, just after the solar eclipse?
7
Dark enough to see stars during total solar eclipse?

7
What is a 'hybrid' eclipse?
5
Total solar eclipse, supermoon, and spring equinox all happening at the same time: anything special about this?
1
Why does the eclipse in this video look annular?
0
At the moment of total solar eclipse what are exact distances of Moon & Sun to the Earth
7
What does a solar eclipse at 99% totality look like?
1
What would cause large jumps in brightness during a solar eclipse?
5
What is causing this strange shimmering pattern of light during a total solar eclipse?
8
Which telescope's model is being shown to Albert Einstein in this file footage? What event might this be?