While the laser beam was on, at approx 1 arcminute beneath and to the left from Arcturus, with my naked eye, I observed a point of light (white/blueish) lighting up to the point which I estimate to be close to the visual magnitude of Jupiter or slightly higher for appprox 5 seconds, and then the "flare" faded out to black. As there was no "regular" star-like remanant, I was left to conclude that the initial flare did not originate from a star.

I ruled out a reflection of the laser beam from a satelite (as too far for my laser's power), a plane or a bird (due to the white/blueish light I saw, its fixed position and apparent distance to my eye), as well the possibility of a meteorite burst (as it had no apparent trajectory, but it appeared as a fixed point).

I am so intrigued and curious as to what possible optics or physics could have been involved and explanations or ideas you may have to explain the phenomenon?

I searched online for others' possible similar observations without success.

My first thought is that you saw a flare from a satellite, meaning a favorable reflection off of a solar panel or something. I use the software "Heavensat", and it shows the satellite Nextsat (Norad number 30774) passed very close to Arcturus at 23:40 pm from your location (45.7288° N, 24.3784° E). Note that I am assuming that your time is 3 hours ahead of UT (Universal Time). 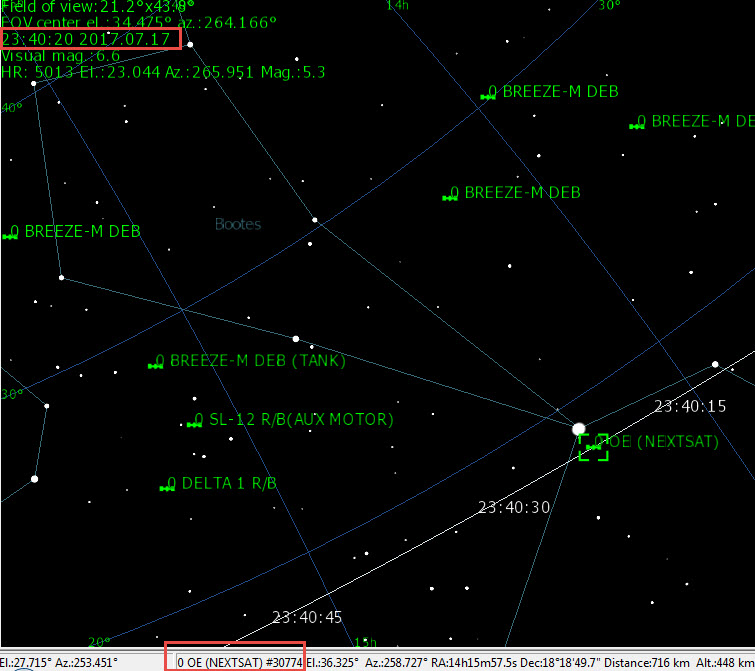 I do not know if Nextsat typically flares, although reflections from satellites are common. Nextsat is in a low altitude orbit, so its motion would normally be detectible. Perhaps the duration of the brightening was shorter than you estimate (so that the motion was not detectible), or it was so unexpected that you did not notice the motion.

My second thought would be a head on meteor like you suggested.

Not the answer you're looking for? Browse other questions tagged star flare or ask your own question.

3
Can a solar flare destroy every electronic item on earth?
2
Magnitude, satellite flare and the Heavens Above app
6
Did interstellar asteroid Oumuamua pass near other stars?
3
Is it possible for a solar flare in one star to influence the chances of a solar flare in another star?
2
What are these objects near Mirach
5
Could an ultra-hot Jupiter flare?
3
How does a Super-Massive Black Hole 'flare'?