How do tip tilt mirrors correct distortion in adaptive optics?

Wavefronts from celestial bodies become distorted as they pass through the Earth's atmosphere due to variations in refraction indices as they pass through different density air, temperature variations and so on. This distortion as far as I know, causes the wavefront to look squiggly instead of being straight parallel lines. Once the light reaches the telescope, it is reflected off a tip tilt mirror, then reflected off a deformable mirror, then a beam splitter splits the light rays and one half is passed through a computer sampling device which detects distortions in the wavefront. This is done up to a 1000 times per second, and somehow the computer causes actuators fitted at the back of the deformable mirror to move such that the reflected light off the deformable mirror is now undistorted (i.e. the wavefronts are a straight line, not squiggly). Thus adaptive optics fixes the distortion issue.

I have a few questions arising from my current understanding:

I believe I am asking too many different types of questions in one post, so I'll make a separate post for this last question, but for anyone reading this:

I keep reading that increasing the size of the primary mirror will improve resolution. I have seen justification of this using Dawe's limit such as

By considering the formula R= 2.1*10^5*wavelength/ D, where R is the minimum angular separation required by two point sources for them to be resolved, so as primary mirror diameter increases, D increases, so R decreases meaning that resolution of the telescope is improved.

I don't really see how they can apply the R=... formula to primary mirrors because I have only seen it derived in the context of light diffracting when it passes through a small slit, and not mirrors (which don't allow light to pass through, but rather reflects it). Can someone explain to me why we can apply this formula to mirrors as well?

Not an expert, but offer one solution:

The adaptive optics correction is accomplished by a tip-tilt mirror and a deformable mirror. Usually the atmospherical wavefront distortion (or say, the phase screen) looks like this: 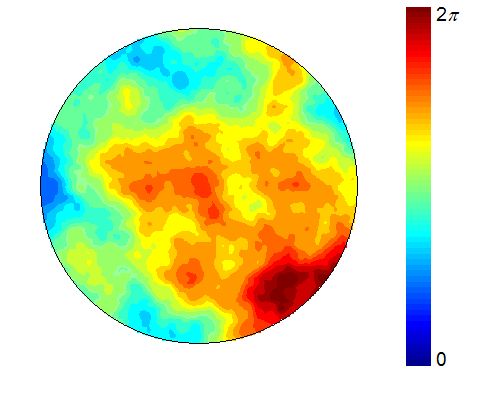 Note its ramp-like shape. In other word, the 2nd and 3rd Zernike terms are large.

You need a little Fourier optics knowledge to fully understand. Briefly speaking, The image $I$ (this is also called the point-spread-function, the linear system response of a Fourier optical system) captured on the sensor follows: $$I(\frac{x}{\lambda f}) = |\mathcal{F}\{p(y)*e^{j (2\pi/\lambda) w(y)}\}|^2,$$ where $x$ and $y$ are the coordinates on the sensor and the aperture, $\lambda$ the wavelength, $f$ the lens focal length, $\mathcal{F}$ denotes Fourier transform, $p$ and $w$ are the aperture shape and the distortion wavefront, respectively.

The same formula above also helps answering your additional question. Increasing the aperture size (the main mirror will finally be mapped to the aperture) is equivalent to, in the Fourier domain, decreasing the blurring size.

Not the answer you're looking for? Browse other questions tagged astrophysics optics adaptive-optics mirror .

4
How difficult is adaptive optics computationally?
5
Adaptive Optics Shack-Hartmann Sensor and Deformable Mirror
8
Where exactly is the modification that first corrected the spherical aberration in Hubble's primary mirror?
7
Are digital adaptive optics possible?
2
Does a continuous deformable mirror cause diffuse reflection?
1
Do point spread functions from large single telescopes using adaptive optics still look like Airy functions for narrow-band filters?
6
JWST mirrors each can be "positioned in tip, tilt, piston, horizontal & vertical decentering and clocking". What does this mean?
7
How are the occurrence and nature of micrometeoroid impacts on JWST optics identified?