Supposed SN 1006 was only 4 lightyears away what would the blasts impact be like on earth?

One of the commenters on my answer to https://worldbuilding.stackexchange.com/a/86733/3460 questions that the blast would even have a noticeable impact if that supernova was in Alpha Centauri. And since my answer is just based on my intuition, I would like to figure that out.

So radiation put aside, what would the blast of SN 1006 be like for earth when arriving, supposed it went supernova just 4 light-years away?

Last week, a paper was posted on arxiv (https://arxiv.org/abs/1707.04253v1) which studies the "The Resilience of Life to Astrophysical Events", in particular it deals with the temperature change of oceans (as boiling oceans would evaporate the water of a planet which seems to be bad for biological life forms...). For a assumed SN explosion of Proxima Centauri the temperature change of Earth oceans would only be 0.1 degree Celsius - not enough to extinct life by boiling the oceans. 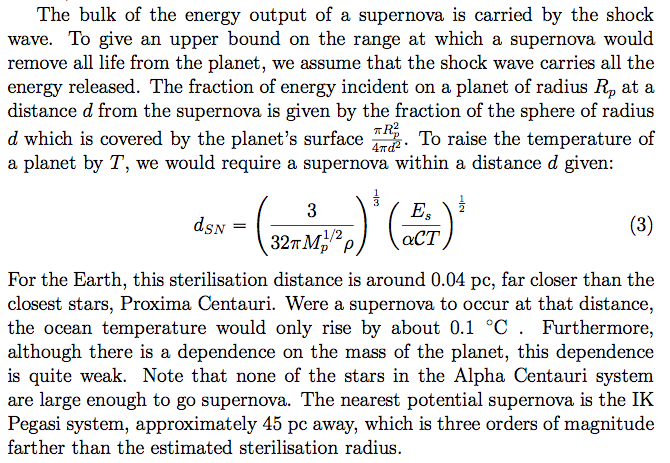 Not the answer you're looking for? Browse other questions tagged supernova .

0
What could be a star-like object that shines at daytime for few seconds? What's the probability to see it?
2
Does a kilonova leave a high mass remnant?
2
Astrophysics of Supernovae - Energy over Distance?
12
What do the fusing 'onion layers' of a pre-supernova star look like to scale?
3
What kind of star would allow for life like our Sun/Earth and then go nova?
8
What would the effects on or around Earth if Betelgeuse went supernova?
2
Can a supernova or a close passing star create a transient sun gravity focus "habitable zone"?