What exactly is the "paradox" in Olber's Paradox?

To the extent of my understanding, Olberâ€™s paradox states that if the universe was static and homogeneous, we should see a star at every point in the night sky and therefore the night sky should be equally as bright as day.

However, since the night sky is dark and non-uniform, it can be said that the universe is not static and not homogeneous. However, if this was already known, what exactly is the â€śparadoxâ€ť? Why isnâ€™t it called Olberâ€™s Observation or something else?

Olber's Paradox was created at a time before the idea of a finite universe was accepted. (It was thought of in the 1600's). In order to resolve Olber's Paradox, you have to introduce the idea that either the universe had a beginning or it is of finite size. (Note: the solution does not require an expanding universe). So, at the time, it was a paradox. Pretty much all astronomers considered the universe to be static and infinite. Therefore, the fact that their observations didn't fit with what they expected made it a paradox.

The question has been addressed, but for completeness I should like to remark that the most thorough and readily understandable discussion of Olber's Paradox is that of E. Harrison in his book Cosmology, the Science of the Universe (CUP 2000).

It is also worth remarking that we now know that the sky at night is not in fact dark: the light from the cosmic microwave background (CMB) dominates all other sources of radiation, including the sum total of all the stars. Most of the CMB radiation comes out in the microwave region of the electromagnetic spectrum. This was discussed by M. Longair and R.A. Sunyaev in the journal Astrophysical Letters (vol 4 pp65-70 1969) with the following sketch 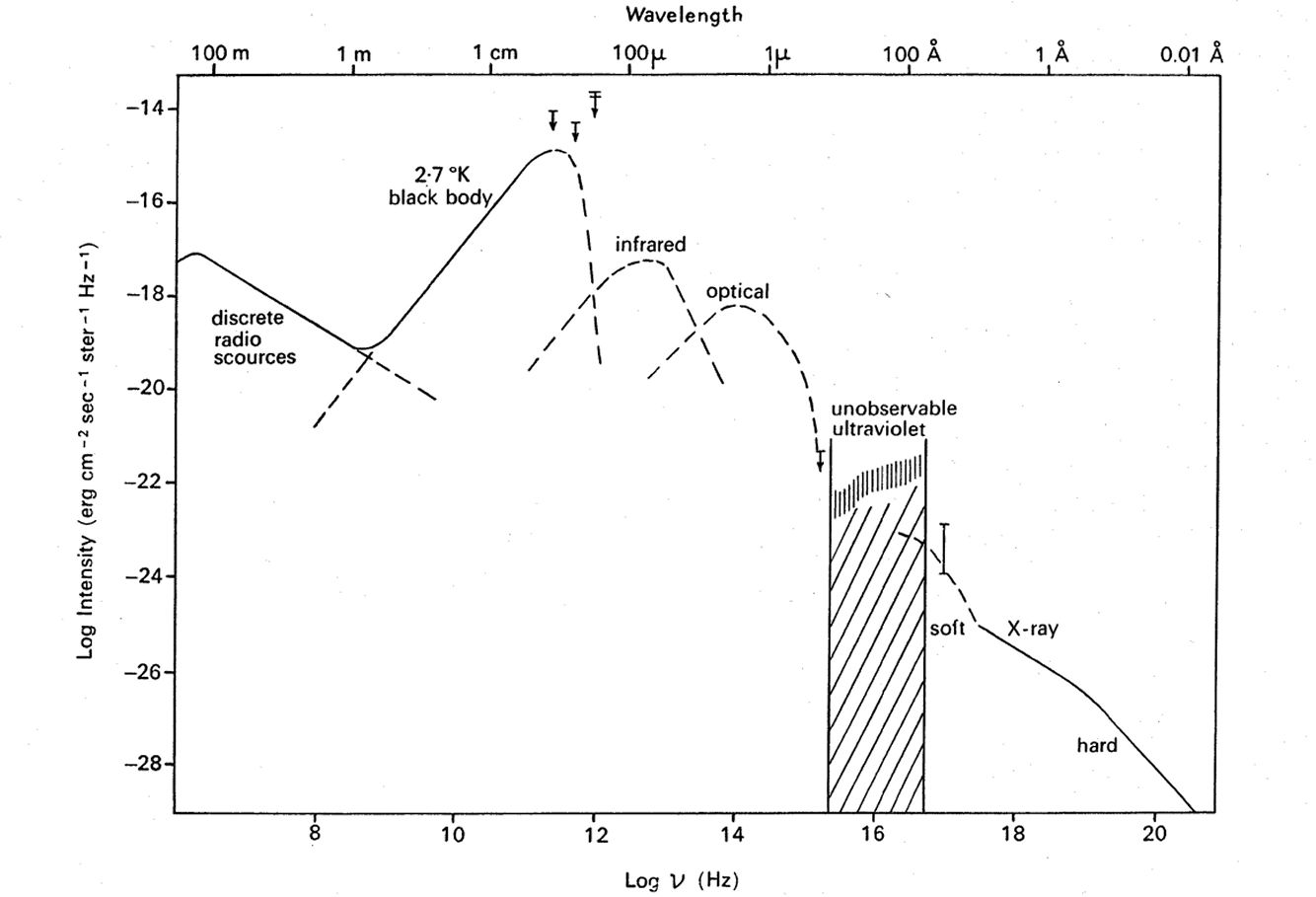 So the sky is not dark at night. The light of the night sky is due to the CMB and not due to stars. The finite lifetime of stars, the finite age of the universe and the cosmic expansion have together reduced the contribution from starlight.

4
Why is it not always light?
4
Why the space is so dark even there are billions of stars and many quasars emitting light
3
Why doesn't the night sky keep on getting brighter and brighter every day?
2
Will the night sky ever be more stars than darkness?
0
With all the stars in the universe, why isn't the sky saturated with light?
4
Why do other galaxies have such a low surface brightness?

1
Why can't different regions of the universe be the same as they have the same origin?
2
Why can I see the Andromeda Galaxy despite Milky Way's rotation?
11
What was the "brilliant new star in Aquila" on June 8, 1918, just after the solar eclipse?
8
What is this rapidly twinkling red, blue, and white star I saw?
5
What is a probability of a particle launched from earth hitting any object in the universe?
19
Are the stars distributed in uniform distribution, on the celestial dome, with respect to brightness?
2
How dark/bright are polar nights?
0
What is the bright star that never seems to move and sometimes the only star in sky?
13
What could be an explanation for a satellite-like moving light in the night sky that dims over time