Half of the Milky Way's baryonic mass is from other galaxies - when did this happen?

The recent Phys.org article Milky Way's origins are not what they seem explains the recent MNRAS article Anglés-Alcázar et al. 2017; The cosmic baryon cycle and galaxy mass assembly in the FIRE simulations DOI:(https://doi.org/10.1093/mnras/stx1517), also in ArXiv.

Using supercomputer simulations, the research team found a major and unexpected new mode for how galaxies, including our own Milky Way, acquired their matter: intergalactic transfer. The simulations show that supernova explosions eject copious amounts of gas from galaxies, which causes atoms to be transported from one galaxy to another via powerful galactic winds. Intergalactic transfer is a newly identified phenomenon, which simulations indicate will be critical for understanding how galaxies evolve.

Question I wanted to know, for a Milky Way-like galaxy, was most of the influx from other galaxies early on, or is this something that is predicted to happen somewhat steadily throughout the galaxy's lifetime?

Galaxy m12i in the simulation represents a Milky Way-mass galaxy, and so I show a screen shot of one of the figures for that galaxy below. Already I am stuck because I don't understand what $z$ represents. It seems to be related to time, rather than red-shift and $z=0$ has a special meaning, but I don't know if that's the present, or the beginning of the simulation.

below: Selected parts of Figure 3 from here. The selected column is data for galaxy m12i, which is representative of a Milky Way-mass galaxy in the simulation.

Figure 3. Top panels: contribution of different processes to the evolution of galaxies m11 (left), m12i (middle), and m13 (right) from early times down to z = 0. Total stellar mass (top), ISM gas mass (middle), and gas accretion rate onto the galaxy (bottom) are indicated by the thick gray lines for each galaxy. Lines of different colors show the contributions from fresh accretion (purple), NEP wind recycling (blue), intergalactic transfer of gas (green), and galaxy mergers (ISM gas: orange; stars: red). All quantities represent average values over a timescale of ∼ 200 Myr. Bottom panels: fraction of stellar mass, ISM gas mass, and gas accretion rate contributed by each process as a function of redshift. Fractions are represented in terms of ranges, so that the contribution of each component at any redshift is given by the vertical extent of the corresponding color at that redshift. 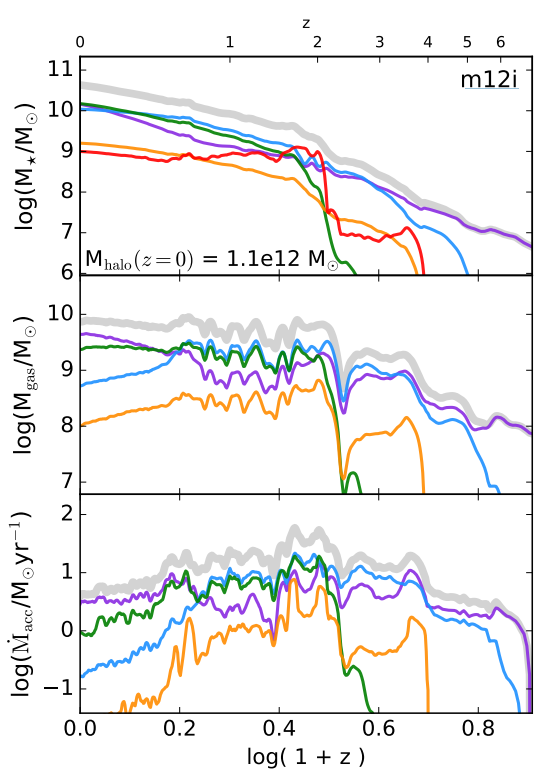 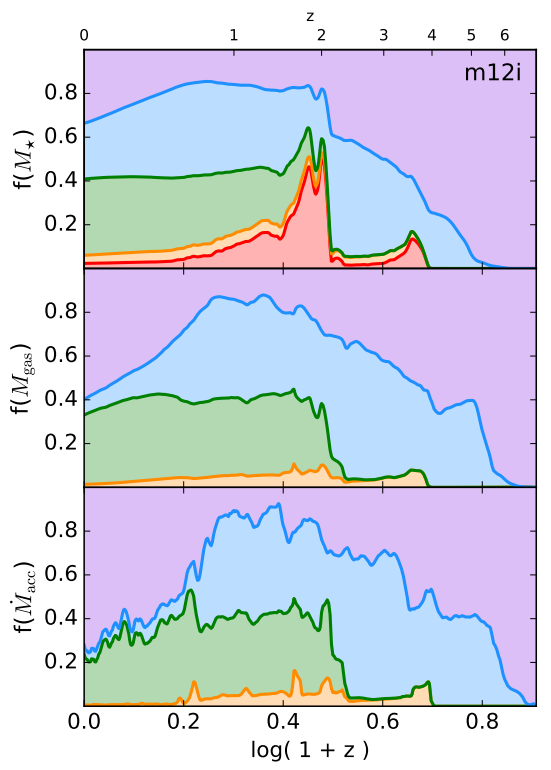 I think what you want to concentrate on is the bottom panel in your first figure, which shows the amount of accretion from different sources as a function of redshift (and thus time; see below). This shows that the contribution from "intergalactic transfer" (green cuve = material in winds outflowing from one galaxy that ends up in another) was almost zero until around $z \sim 3$ (age of universe $\sim 2$ Gyr), peaked at around $z \sim 2$ (age of universe $\sim 3.5$ Gyr) and then declined slowly from there, so that it's now about 10% of the peak rate.

"$z$" is the redshift, which is being used as a proxy for time: $z = 0$ corresponds to the present day (age of universe = 13.7 Gyr), $z = 1$ corresponds to an age of about 6 Gyr, $z = 2$ is about 3.3 Gyr, and so forth. You can use Ned Wright's Cosmology Calculator to convert individual redshifts to ages of universe (click on the "Flat" button to use a standard cosmology).

Not the answer you're looking for? Browse other questions tagged galactic-dynamics .

8
Python 2D Jean Instability in Spiral Galaxy Simulation
1
Could discoid galaxies be expanding?
10
What (actually) is the " deprojected half-light radius" of this almost-all-dark-matter Galaxy?
2
What has GAIA found out about the dwarf galaxy heritage of stars in the Milky Way, if anything?
2
How do disk-shaped galaxies then form at the sites of spherical galactic halos? Do the halo stars start orbiting or just sit in place?
0
How do they know the newly-spotted gas near the center of our galaxy is molecular without knowing what gas it is?
0
Why is SPT0418-47 ("the most distant Milky Way look-alike") expected to evolve into an elliptical galaxy?
2
Figure out the location of celestial objects relative to the Milky Way in x, y, z co-ordinates