I don't know very much about telescopes; I used one a few times as a kid, but that's about it. I understand the general design & use of reflectors & refractors, but I don't know enough to decipher focal length, etc. So, I don't feel comfortable trying to DIY my own contraption, that won't be nearly as good, assuming it works at all.

I'm looking to buy a minor telescope (a few hundred dollars [US] or less) to view the American Total Solar eclipse on Aug. 21, 2017; and possibly reuse for the Mercury transit in 2019. I'm a decently well off computer programmer, so blowing $200 (& some gas to drive up-state) for a one off just to experience the Solar eclipse is worth it to me, even if I don't use it again.

I spent a few hours wandering around the internet for something, and I found a few styles of "Projection Screens/Scopes" that are really cool, but I can't find anywhere to buy them. The first is an image that several websites used as their article's banner image, but none say what it is or where to get it. 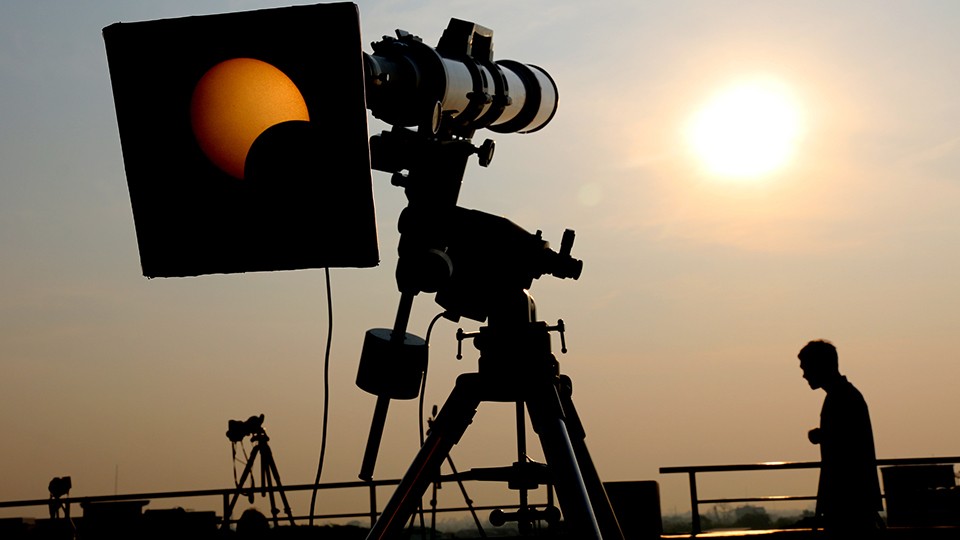 I found another one, where a guy hacked together a projector scope from an old 8mm film projector. 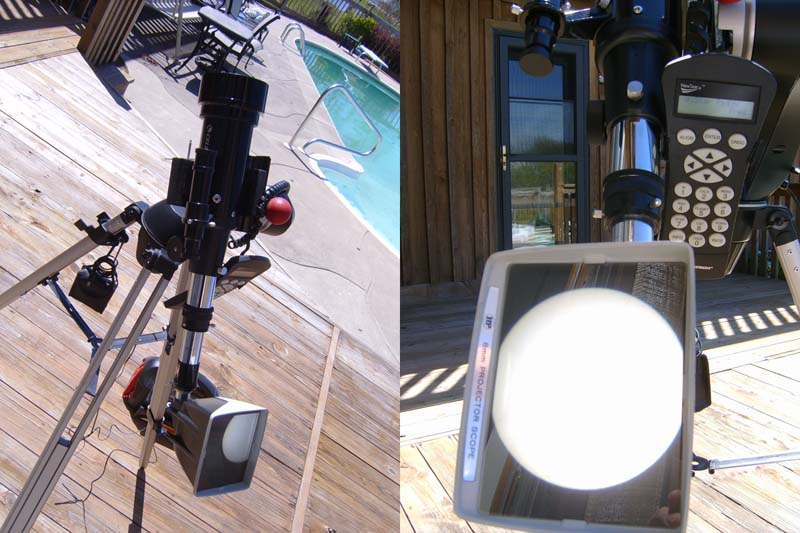 I've found many DIY tutorials to roll-your-own out of dixie cups & Pringles cans, but as I said before: I'd rather not waste my time fumbling with that, since I'd probably screw it up; I'd rather pay money to get one that's good quality & done right.

I've wanted to buy a big light bucket for years now, so I can start looking at nebulae & planets, but never got around to it; mostly because I'm not sure what to buy. I've been looking at the "Orion SkyQuest XX14i Dobsonian" for a while, but never pulled the trigger. Given that the eclipse is only 3 weeks away, I figured something smaller would be a faster choice in the short term.

I found the "Celestron EclipSmart 50 50mm f/7.2 Alt-Az Solar Telescope" that comes with a backpack storage bag, for \$100. It has a built-in (i.e. non-removable) solar filter, & a collapsible tripod. But that seems pretty cheap; is \$100 for a telescope like that normal, or is that a poor quality trap for laymen like me?

Do yall have any advice on something to get for the solar eclipse? And is there anywhere to get a professionally made projector screen like that, so I can watch the multi-hour process from a chair rather than bending over for 2 hours? (p.s. I'm 6 foot 3 inches tall) Also, if possible, being able to record video of it on my Samsung Galaxy S6 would be cool, but not required if that's a big deal.

Thanks for your help,

For your purposes, I'd really recommend just purchasing the EclipSmart. The telescope itself is of reasonable quality. If you have a camera tripod, bring it with you to view the eclipse$-$the stock tripod is so flimsy as to be useless. If you dont have one, buy one. Additionally, you should invest in different eyepieces. The telescope comes with a 20-mm EP, which will provide relatively low magnification. I'd recommend getting a 6-mm EP, and possible an intermediate one as well.

P.S. I would recommend against getting the XX14i as your first telescope. I think instead you should get a smaller EQ, in the 4-6-in bracket. Having to manually find your target will teach you much about the skies, and having to do so with a smaller aperture will humble you. I worked a 4" Alt-Az for a decade as a kid before moving to a 4.5" EQ for a year, and then finally an XT12i as a highschool sophomore. Having to find my targets in my relatively bright skies made the sights I see through my 12" that much more incredible. I think allowing yourself the same experience will be a decision you won't regret. Don't fall for aperture fever!

Not the answer you're looking for? Browse other questions tagged telescope amateur-observing photography solar-eclipse or ask your own question.

3
Viewing a solar eclipse through a leafy tree
5
Basic DIY Telescope
2
Filters for solar eclipse and solar feature viewing
6
Good ways to safely view an Eclipse?
4
Telescopes for beginner astrophotography
4
How to properly observe Solar Total Eclipse in 2019?
3
How to locate nebulas visible through AstroMaster 114 telescope without device assistance?