Why would there be no day/night cycle even though the firmament would still be rotating, according to Copernicus

In chapter 6 of "The Revolutions of the Heavenly Spheres" where Copernicus maintains that the heavens are immense compared to the size of the Earth, the Edward Rosen translation of the book states this

"The upshot of the argument, then, is the claim that the earth as a part of the celestial sphere shares in the same nature and movement so that, being close to the center, it has a slight motion. Therefore, being a body and not the center, it too will describe arcs like those of a celestial circle, though smaller, in the same time. The falsity of this contention is clearer than daylight. For it would always have to be noon in one place, and always midnight in another, so that the daily risings and settings could not take place, since the motion of the whole and the part would be one and inseparable."
To add context. Copernicus is debating the classical point which assumes that "the center is at rest, and the nearer an object is to the center, the slower its motion." Copernicus in the previous paragraph states that this assertion could be translated into a sphere. Where the center are the poles, and the constellations around those poles (i.e. Ursa Minor, Draco, etc...) would be rotating slower as they are closer to those poles. Yet Copernicus refutes this by saying that if those constellations truly moved slower than the rest, they wouldn't be able to make a full 360° rotation in a year.

Copernicus then in the paragraph above, argues that the Earth too must orbit around the center in order to account for the "slowness" in the poles. However Copernicus further refutes this by stating that there would be no day/night cycle in this case.

To elaborate on my question asked in the title. Why would the Earth need to orbit in order to account for this "slowness." And why would there be no day/night cycle even though the firmament would be rotating and not the Earth along with it.

Find a spherical object and imagine it's a celestial sphere with the world at the middle... consider the daily rotation of the sphere around as a spinning top, and a yearly tilt through the constellations which is the same as an unstable spinning top which is about to tip over.

Now, rotate it and dont spin the days, and only spin the sphere for the yearly seasons.

How fast are all points on the sphere rotating as it tilts, same as a spinning top is not straight, and omitting the individual rotations?

All points on the sphere are going at the same speed, the top of an orange describes a 1cm axial tilt, and the sides of the sphere also describe a 1cm axial tilt... put the orange sideways and tilt it again, the rind is at the same speed as the side whichever way the orange is viewer. How to combine the slower star speed of rotation in 24 hours with the equal star speed of rotation through the seasons? The previous theory didn't give two speeds and axes of rotation.

So, the 7 heavens other than the stars can be described as an epicycle on a 2D, as a turntable and epicycle.

For the stars, the 2D epicycle is more complicated, because it has to account for two speeds of rotation, the constant one around the seasons and the one that is slower in the middle. The epicycle geometry breaks down in 3D as a sphere, and only a sphere can explain the two types of rotations in the stars, and the 2100 year one. 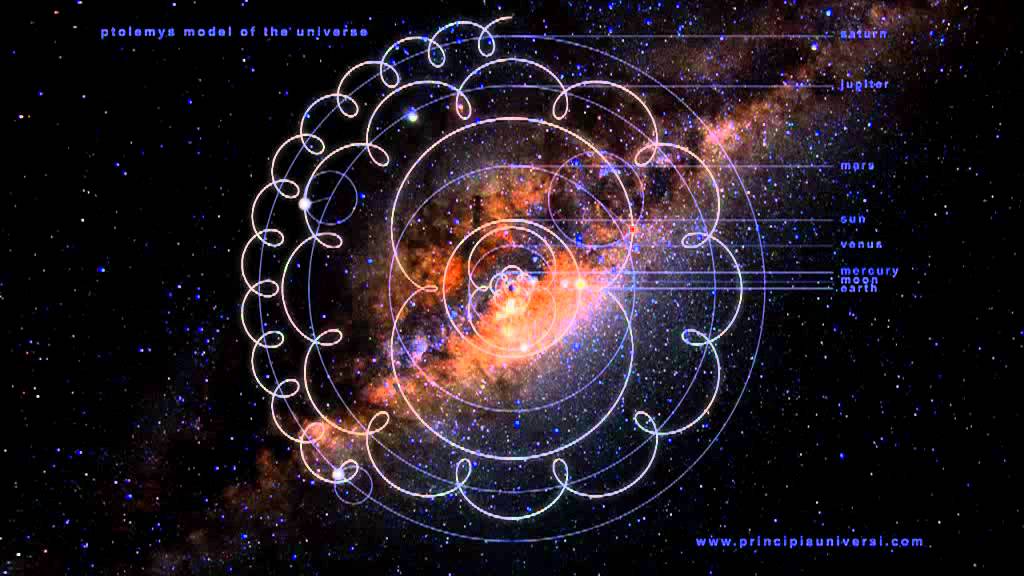 Not the answer you're looking for? Browse other questions tagged earth history or ask your own question.

9
Why do our clocks not go out of sync with the day over a year?
7
Effects of the solar tide on planets
1
How are the elevations of the poles proportionate to distances of earth that have been traversed according to Copernicus
1
What is Copernicus referring to when he states that “circles have poles different [from the earth's]”
3
How did Ptolemy prove in the following excerpt that the Earth is not cylindrical?
1
The size of Copernicus’ and Ptolemy’s corrections
3
How Does Earth Move In Relation To The Stars
2
Will Earth rotate backwards in the future?