Why do some solar eclipses' umbra cross arctic/antarctic regions?

The ecliptic (Earth's orbital plane) is inclined 23.4 degrees. This is the same as Earth's axial tilt. The Moon's orbit is inclined 5.145 degrees to the ecliptic.

Therefore, the maximum latitude where a solar eclipse produces an umbra should be 28.545 N and 28.545 S.

But this is clearly not the case. Wikipedia has a huge list of solar eclipses with charts. Here's one that goes very near the south pole. How is this possible?

Edit: Actually I missed something. Since the Moon and Sun must be in the same place, and the Sun can never exceed 23.4 degrees declination, solar eclipses must be bound by 23.4 N/S. I should not have added the two angles. Thanks to user:berrycenter for pointing it out.

I wanted to ask this question even though I realized the correct geometry in the middle of typing it. So I will answer this myself.

But that does not mean the Moon's shadow can't wander outside it. Here's one way it could happen. 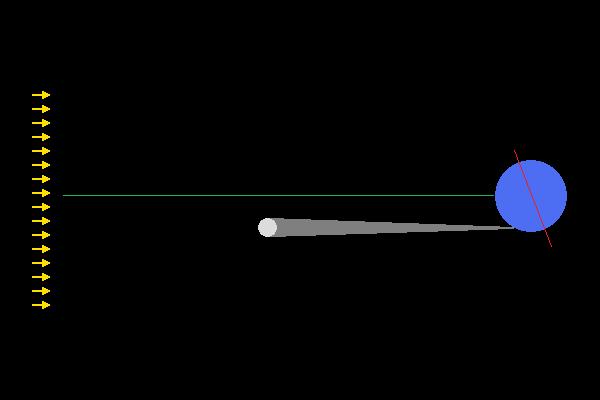 Edit: this is my attempt to draw something approximately to scale. I think I got the Earth/Moon sizes about right, but the Moon-Earth distance should around 4x greater. And the solar rays are of course not parallel but I don't think it's possible to draw or perceive tiny angles for this scale.

The green line is the ecliptic. The Sun and Moon are supposed to be aligned along a horizontal line, but for some reason I drew the solar rays half and half beside the green line which is deceptive. I'll try to edit the pic when I can.

In technical parlance, the Moon could be slightly above or slightly below its Node. If the Moon was exactly at its node, then the umbra would absolutely be centered somewhere between 28.5 N/S (actually 23.4 N/S because the Sun never goes beyond that). But as you can see, the farther it gets from its node, the steeper the shadow impacts Earth and the farther towards a pole it gets. Too far from the node, and the shadow will not intercept Earth at all and we won't have an eclipse.

You could even imagine a very extreme case where the shadow falls on "the other side" of the pole. I think that may be the case here since that eclipse looks really short.

5
Solar Eclipses for dummies: Step 1 - moon equatorial orbit around a planet without axial tilt
6
How rare are earth-like solar eclipses?
6
Ambiguity in Earth's "Tilt"
3
When will solar eclipses become lunar transits?
9
When the Moon formed and early on, did it orbit over the Earth's equator?
7
Place on Moon that always lit?
4
Solar and lunar eclipses -- how rare
4
How to calculate the nodal precession range of the Moon with respect to the celestial equator?