Why don't multiple eclipses happen over the course of a few days?

From my understanding over the course of the seasons the moon and sun rise at varying locations. Though the day to day differences are no noticeable, to me at least. For instance, in the summer, the sun takes a longer path overhead as a result of the earths tilt towards the sun in the summer months -- in the winter, short paths.

With the seemingly negligible difference in path lengths of the sun from day to day why then do solar eclipses only happen on a single day and not over the course of many days? It seems that if the moon and sun paths during the day were to intersect they should do it multiple days in a row as their path lengths across the sky during the day change.

I assume the answer to this lies particularly with the moons orbit around the earth and its shape/inclination. But I am far from my last astronomy courses and have lost all the jargon and knowledge needed to determine this.

The reason is because the moon moves much faster (in terms of angle per day) than the sun. In fact it moves on average 12.5 degrees per day, and all in the same direction. Given that the sun is only about 0.5 degrees in diameter, it doesn't take long for the moon to overtake it, and once it's past it doesn't go backwards.

Eclipses last for a couple to maybe a few hours, from a certain point of view. The time that an eclipse lasts is most commonly discussed relative to a specific location. For eclipse watchers, you park your car, get your glasses, and watch the show that lasts for a couple minutes for the total eclipse. (Longer for the partial). 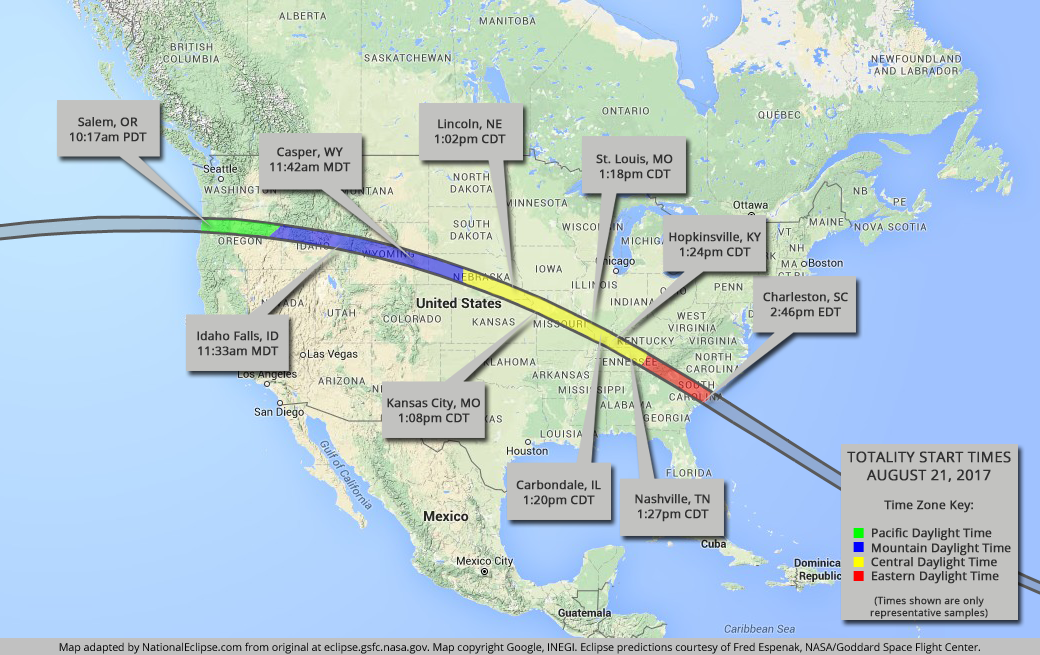 The eclipse hit Oregon at 10:17 AM Pacific time (1:17 PM Eastern time). It passed over the east coast of South Carolina at 2:46 PM Eastern time, or 1 hour and 29 minutes later. If you count the time the eclipse passed over parts of the Pacific and Atlantic oceans, it probably lasted over 2 hours and if you count partial eclipses, a fair bit longer than that.

The difficulty is, to see the eclipse for 2 hours, you'd need to be in a fast plane, following the path.

The sun is about 1/2 of 1 degree of arc in the sky, or 1/720th the full circle. A Lunar synodic orbit takes 29.5 days, and 1/720th of 29.5 days is about 1 hour and that's partial to partial. The total eclipse is a small fraction of that and lasts a few minutes max, depending on how close the Moon is to the Earth and it's relative size to the sun. So for a total eclipse, it only takes a couple minutes for the Moon to pass through a complete one.

The reason why eclipses last longer than that the 1 hour it takes the Moon to move 0.5 degrees relative to the sun is because the Earth is quite large. At nearly 8,000 miles in diameter, it takes the a bit over 3 1/2 hours for the Moon's shadow or umbra, moving on average about 2,230 mph, to pass over nearly 8,000 miles and 4 1/2 hours time if you include the partial eclipse. That's only if it hits near the equator. If the eclipse only grazes the Earth near a pole it lasts much less time.

The 1 hour and 27 minutes is in part cause it takes the Moon about 1 hour to pass over the United States around Noon, and because the Earth rotates with the Moon, in the same direction, in a sense, the US is trying to keep up with the Moon's shadow, so that extends the time to about 1.5 hours to cross the US. If the Earth rotated faster, say, roughly 8-10 hour days depending on your latitude, then it might be possible to observe hour long total eclipses because the Earth's rotation could roughly match the Moon's relative movement to the sun under optimal conditions, but a 24 hour rotation is too slow for that to happen.

That's the problem with timing these things, we're on a rotating sphere observing an orbiting object. Eclipses vary in duration for those reasons. For the longest eclipse to the stationary observer, look for an eclipse near the equator and near mid-day. A larger, close moon might provide a total eclipse a little longer, but the closer the Moon is the faster it orbits so for a larger-closer moon, the partial eclipse period would be somewhat shorter.

I hope that wasn't unnecessarily complicated. Dr. Chuck's answer is correct. It doesn't take long for the Moon to cross the Sun's position in the sky. About 1 hour edge to edge.

This article goes into even more detail on these points with some videos if interested.