A long time ago I read a very interesting way of studying the sun's internal structure via sound waves. This new field of study, probability already known here, is called helioseismology.

How much can we learn from gas giants by "listening" to sound waves?

Somewhat tangent to the question: Does this extend to all other kind of giants such as hot Jupiter, ice giants, etc...?

I'm certainly not an expert, but from what I understand, the type of observation done in helioseismology might not work with gas giants, hot jupiters, ice giants, etc.

The sun is dense enough and it has enough gravity that, while its a plasma, it's relatively solid most of the way through. Unlike Red Dwarf stars which are lighter and undergo convection (0.35 solar masses and under are modeled to be fully convective), the sun is layered and doesn't undergo convection.

While oversimplified, the sun behaves like a drum in regards to it's internal soundwaves. The sun is also very very loud, inside and on the surface.

If you played a drum in a vacuum, you couldn't hear it, but you could observe the motion of the drum's surface and work out what it would sound like by visual observation only. Same with guitar strings. The vibration is visible in wavelength and amplitude.

Exaggerated, the pattern on a drum would look something like this. 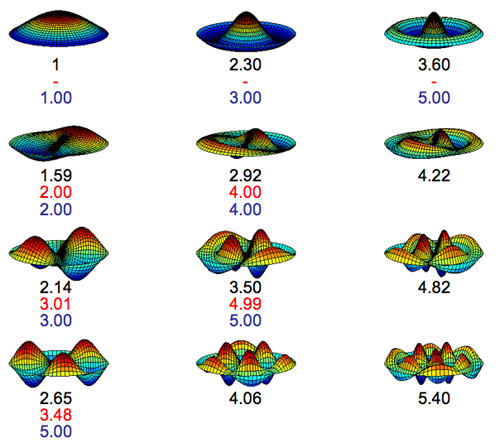 That's basically how the Sun's soundwaves are studied. It's often compared to Sonar but I don't like that comparison because sonar works by sending a soundwave out and seeing what gets reflected back. It's more like the visual observation of sound vibrations, or, like studying a drum by looking at it's vibrations instead of listening to it.

This is a picture of what those vibrations look like on the sun (again, greatly exaggerated).

As noted in the article, a drum has one node. The sun has many nodes, so it's more complicated. It's the studying of those many nodes that gives insight into the inside of the sun.

But this can be done using visible light seen from Earth as well, a bit similarly to how it's done for the Sun (time domain Fourier transforms of images and Doppler shifts) except with a lot less resolution.

Recommended: Also see @astrosnapper's answer to What constraints are there on solid material in the ice giants? which includes time-domain measurements including Doppler imaging.

From orbit around the planet (two different ways)

Gizmodo's Ripples in Saturn’s Rings Reveal Planet’s Core Is Big and Jiggly mostly talks about movements of the structure of Saturn's interior, but also mentions motion in the surface:

Saturn can be thought of as a giant space blender, spinning its constituent elements of ice, rock, and gases that are in some places so cold they behave like fluids. **The planet’s surface moves a little bit in all the hubbub—about 3 feet every couple hours, placid for an object its size—and that wobble causes fluctuations in the planet’s gravitational field, which stretches outwards in spirals to the planet’s rings, distorting them. The icy particles that make up Saturn’s rings move in response to those gravitational changes from the planet’s sloshing insides, tantamount to seismic activity for a planet that is not rocky.

These are measurement of internal motion inferred from "ripples" in the structure of Saturn's rings as imaged by Cassini's cameras.

However, Cassini's own trajectory's response to variation in Saturn's gravity field offered a second way to "listen":

his is only the latest in what has been a string of insights from Cassini on the Saturnian interior and the processes that could be induced by it. More Cassini data on other oscillations has yet to be looked at, and mysterious accelerations felt by the spacecraft in the later stages of its operation have yet to be explained. It may be a while before we return to Saturn with another spacecraft (the limelight is currently on Venus and Mars), but thankfully Cassini left astrophysicists with their hands full.

The abstract for the second link to the new July 2021 paper in arXiv Possible evidence of p-modes in Cassini measurements of Saturn's gravity field:

We analyze the range rate residual data from Cassini's gravity experiment that cannot be explained with a static, zonally symmetric gravity field. In this paper we reproduce the data using a simple forward model of gravity perturbations from normal modes. To do this, we stack data from multiple flybys to improve sensitivity. We find a partially degenerate set of normal mode energy spectra which successfully reproduce the unknown gravity signal from Cassini's flybys. Although there is no unique solution, we find that the models most likely to fit the data are dominated by gravitational contributions from p-modes between 500-700uHz. Because f-modes at lower frequencies have stronger gravity signals for a given amplitude, this result would suggest strong frequency dependence in normal mode excitation on Saturn. We predict peak amplitudes for p-modes on the order of several kilometers, at least an order of magnitude larger than the peak amplitudes inferred by Earth-based observations of Jupiter. The large p-mode amplitudes we predict on Saturn, if they are indeed present and steady state, would imply weak damping with a lower bound of Q>1e7 for these modes, consistent with theoretical predictions.

From this answer to Is there a term for asteroseismology as applied to giant planets?

A good example of the Fourier imaging technique is SYMPA:

Not the answer you're looking for? Browse other questions tagged astrophysics gas-giants or ask your own question.

3
Is there a term for asteroseismology as applied to giant planets?
4
What constraints are there on solid material in the ice giants?