Does the earth's atmosphere act as a spherical lens and refract light from space?

If so by how much does it "spoil" the view of stars and galaxies etc.

Is this error noticable, when compared to pictures taken from outer space.

If so by how much does it "spoil" the view of stars and galaxies etc.

There are several very different issues related to your question. Let's tackle them one by one.

Yes, the Earth's atmosphere refracts light. One notable effect is that objects near horizon appear higher than they should be.

Therefore, the Sun (or any other object) rises earlier than it should, and sets later.

It affects astrometry, because it messes up the coordinates of objects near the horizon. Other than that, it does not cause great harm to astronomy.

And then there are several effects harmful to astronomy:

What we call in astronomy "seeing" is just air turbulence. Because air moves around due to heat, it distorts the image continuously. This is how the Moon looks like in a telescope - notice the shifting around due to seeing (animated GIF, reload if it's not moving, or open in new tab):

If we lived in a vacuum, that image would be static, and perfectly clear. But turbulence causes the shifting. Also, it causes a blur - the image is less sharp than it could be. It's also what causes the stars to "twinkle".

It's basically the same phenomenon that you see in summer along the hot walls of a house under sunlight - the same shimmering effect of the image seen through the hot rising air along the walls.

For amateur astronomers, seeing affects high-resolution targets such as planets, the Moon, double stars. It does not affect targets that are perceived to be "low-resolution" in an amateur telescope: galaxies, nebulae, star clusters.

Since seeing depends on weather, it can be predicted to some extent:

Atmosphere also scatters and reflects light back to Earth. All the city lights around you are scattered by haze and dust in the air, and some of that light goes back down into your eye, creating sort of a "light fog".

As a result, objects that are not too bright are masked by light pollution and become less visible, or invisible altogether. 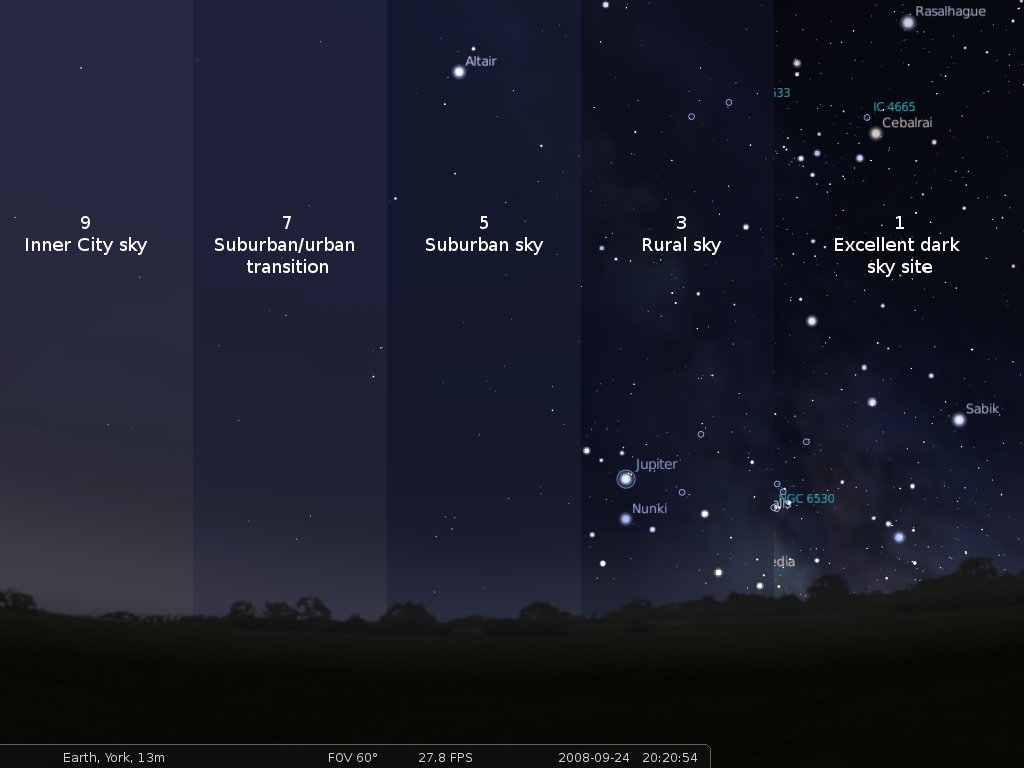 A bigger telescope will help you pierce through the haze of light pollution, but only to some extent. The best way to see faint objects is to put the scope in the car and drive far away from the city.

For amateur astronomers, light pollution affects the "faint fuzzies": galaxies, nebulae, star clusters. It has no effect whatsoever on bright objects such as: planets, the Moon, many double stars.

Other ways the atmosphere can negatively impact observations:

It does not act as a solid lens, because it does not have a limit surface. Instead, atmosphere's density varies slowly with altitude.

Since its refractive index is very close to 1 it is hardly noticeable any refraction. You will note it mostly on the horizon.

The three main effects of atmosphere are

Not the answer you're looking for? Browse other questions tagged star space atmospheric-effects or ask your own question.

12
Where does the radiation in space come from and can we observe it?
2
What exactly does outer space contain?
3
Instrumental magnitude to “real” magnitude - Photometry with not enough data?
5
How many stars can be seen naked eye from outside the atmosphere? How dense is the “sky” from there?
8
Why are there no stars on New Horizons images of Pluto
9
How can we hear the sound of the Sun?
6
At what size do objects burn up in the atmosphere when falling from orbit?
1
At what speed does something have to travel away from us for it to red shift enough that it becomes invisible to the human eye?