I was fortunate enough to see totality during the eclipse of 2017 August 21. It did leave me wondering about the 1919 Eddington experiment, though. During totality, it only got dark enough to see a few of the brightest objects like Venus and Jupiter. It was more like twilight than night that way.

So how were they able to see and photograph stars in the 1919 eclipse? Do skies get darker during some total eclipses than others? Was there more light scattering in my case, from being in a populated area? Or do the right optics let you photograph stars during twilight-like conditions?

One thing to double check is if you can see stars easily at night from the same location. If there are city lights nearby, combined with humidity or dust you can have a bright sky due to terrestrial effects.

Another thing to consider is the time needed for dark adaptation. If you walk from a brightly lit room out under a dark sky, you can't see many stars right away. There needs to be time for your eyes to adapt to the dark. If you were looking at the screen of a camera or phone or another light source, that would further slow down the adaptation process.

The astrometric data for the 1919 eclipse test of General Relativity was done with a telescope, not the naked eye. Stars are unresolved, which means that no matter what magnification, they are still small points of light who's size (visual or on film) is determined by other effects, like diffraction, aberrations and focus as well as the resolution of the retina or the film. In short, they stay small. However, sky brightness is reduced by magnification squared. If you expand a patch of sky by 10X then each point is 100 times dimmer.

Both of these are offset by the increase in light from the larger aperture of the telescope, but its mostly the sky brightness that decreases with magnification.

The interesting stars were the ones closest to the Sun, because they would have the largest deflection, which was really small, only of the order of one second of arc. There the problem was the brightness of the solar corona, more than the sky. If you look closely at the photographic negative below, you can see pairs of faint horizontal lines. In the middle of each pair is the position of a star to be observed. Even with the telescope and extended photographic exposure, the images are faint. 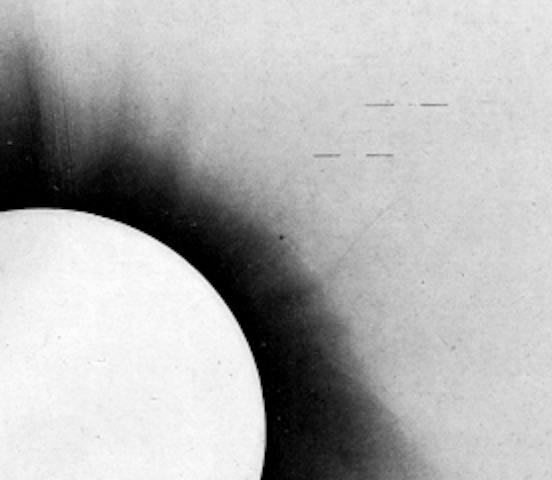 above and below: 1919 eclipse negative, from here. Original from: F. W. Dyson, A. S. Eddington, and C. Davidson, "A Determination of the Deflection of Light by the Sun's Gravitational Field, from Observations Made at the Total Eclipse of May 29, 1919" Philosophical Transactions of the Royal Society of London. Series A, Containing Papers of a Mathematical or Physical Character (1920): 291-333, on 332.

Negative of the 1919 solar eclipse taken from the report of Sir Arthur Eddington on the expedition to verify Einstein's prediction of the bending of light around the sun. For positive version, see Image:1919 eclipse positive.jpg.

In Plate 1 is given a half-tone reproduction of one of the negatives taken with the 4-inch lens at Sobral. This shows the position of the stars, and, as far as possible in a reproduction of this kind, the character of the images, as there has been no retouching. A number of photographic prints have been made and applications for these from astronomers, who wish to assure themselves of the quality of the photographs, will be considered as as far as possible acceded to. 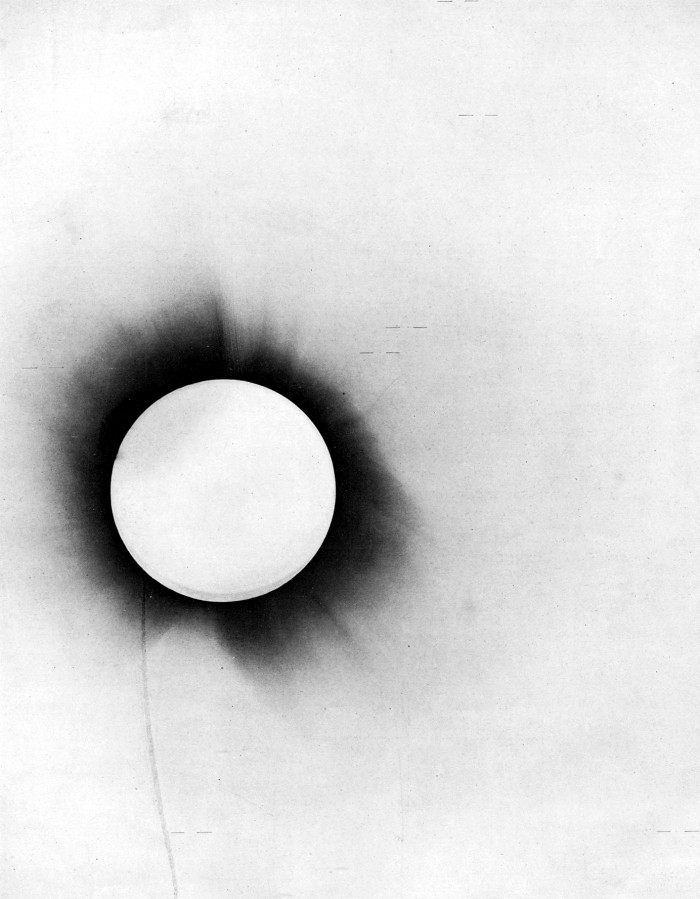 below: Screen shot from the March 2009 Physics Today article Testing relativity from the 1919 eclipse—a question of bias. The telescope on the right, in the square tube is the 4-inch instrument that provided the photographs used in the analysis. Heliostat mirrors driven by clocks were used to reflect light from the region near the Sun into the fixed telescope. 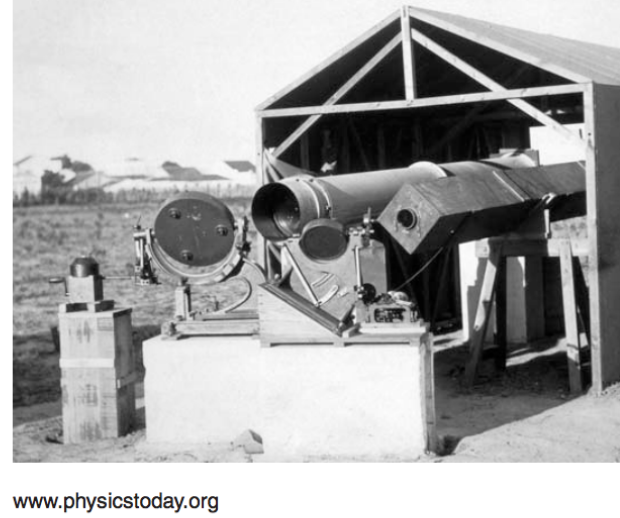 2
What is the large astronomical instrument shown in this 1918 eclipse expedition photo?