What is a singularity? What is at the center of a black hole? Specifically regarding space-time

So because I can only really think of space-time in 2-dimensions like a sheet of something, my assumptions might be wrong to begin with. I was watching a YouTube video on black-holes and there was a quip regarding black holes and their warping of space time, to the point where the narrator said something along the lines of “there is nothing at the center of the black hole but gravity has warped space time so much that it's this ’pinhole’ like affect that causes the blackhole behavior”.

This is more of a question for the Physics stack, but I'll give it a shot, since it's fairly basic.

You need to understand something before we begin. The theoretical framework we have to gauge and answer this sort of thing is called General Relativity, which was proposed by Einstein in 1915. It describes things such as gravity, black holes, or just about any phenomena where large densities of mass or energy are involved.

There's another chapter in Physics called Quantum Mechanics. This describes, usually, what happens at very small scales - things that are super-tiny.

Both GR and QM are fine in their own way. Both are tested against reality and work very well. But they are not compatible with each other. Meaning: you cannot describe a phenomenon from a GR and a QM perspective, both at once. Or meaning: we don't have a coherent set of equations that we could write down, and then "extract" out of them either a GR-like view of reality, or a QM-like view.

The problem is, the center of a black hole is both very high mass density and very high gravity (and therefore right in the field of GR), and very small (and therefore "quantum-like"). To properly deal with it, we'd have to reconcile GR and QM and work with both at once. This is not possible with current physics.

We pretty much have to stick to GR only for now, when talking about black holes. This basically means that anything we say about the center of a black hole is probably incomplete, and subject to further revision.

A star dies, collapses into a black hole, what is at the center? The star's mass compacted into the size of the plank length or something similarly small? Is there really nothing at the center of a black hole?, surely the core collapsed into something, just really small right?

According to General Relativity, it collapses all the way down to nothing. Not just "very small", but smaller and smaller until it's exactly zero in size. Density becomes infinite.

You can't say "Plank length" because, remember, we can't combine GR and QM, we just don't know how. All we have here is GR, and GR says it goes all the way down.

It is quite possible that the singularity is not physical, but just mathematical - in other words, whatever is at the center is not actually zero size. Quantum mechanics in particular would be offended by zero-size things. But we can't say for sure because our knowledge here is incomplete.

I'm using words such as "size" (which implies space) and "becomes" (which implies time). But both space and time in the context of a black hole are very seriously warped. The "becoming" of a black hole all the way down to the zero-size dot is a reality only for the unlucky observer that gets caught in it. But for a distant, external observer, this process is slowed and extended all the way to plus infinity (it's only complete after an infinitely long time). Both observers are correct, BTW.

So, when we are saying "density is infinite and size is zero at the singularity", this language applies to the unfortunate observer being dragged down in the middle of the initial collapse of the star.

But from the perspective of the distant observer, a black hole is still a chunk of mass (the original star) in a non-zero volume (the event horizon of the BH). To this observer, the density of that object is finite, and its size is definitely not zero. From this perspective, anything falling into the BH never quite finishes falling, but just slows down more and more.

Both observers are correct. So, keep in mind, when I talk about "infinite density", that's the inside observer point of view.

What is a singularity? Is it just the warping of space time that makes it this way?

You get a singularity whenever there's a division by zero in the equations, or when the equations misbehave somehow at that point. There are many different kinds of singularities in science.

In the context of a black hole, the center is said to be a gravitational singularity, because density and gravity are suggested to become infinite, according to the GR equations.

GR says: when you have a lump of matter that's big enough, it starts to collapse into itself so hard, there's nothing to stop it. It keeps falling and falling into itself, with no limit whatsoever. Extrapolate this process, and it's easy to see that the size of it tends to zero, and density tends to an infinite value.

Put another way - if density becomes large enough, gravity is so huge, no other force is strong enough to resist it. It just crushes all barriers that matter raises to oppose further crushing. That lump of matter simply crushes itself, its own gravity pulls it together smaller and smaller... and smaller... and so on. According to current theories, there's nothing to stop it (QM might stop it, but we cannot prove it, because we don't have the math). So it just spirals down in a vicious cycle of ever-increasing gravity that increases itself.

Speaking in general, physicists don't like singularities. In most cases, this is an indication that the mathematical apparatus has broken down, and some other calculations are necessary at that point. Or it might indicate that new physics are taking place there, superseding the old physics.

One last thing: just because we don't have a combined GR/QM theory to fully describe the center of black holes, that doesn't mean a pure GR research in this area is "wrong" or "useless". It doesn't mean one could imagine some arbitrary fantasy taking place inside a black hole.

Astronomers these days are starting to observe cosmic objects that are very much like black holes, and their observed properties are in very close accord with what GR predicts for such things. So research in this field must continue, because it's clearly on the right track, at least in the ways we can verify today in astronomy.

As others have said, mathematically, a singularity is when there is an attempt to divide by zero. Take, for example a Schwarzschild black hole. This is a black hole that has no electric charge or angular momentum; tt is the simplest type of black hole.

According to general relativity, gravity is the bending of spacetime. The curvature of space can be expressed using something called a metric, which is similar to the distance formula we use in geometry. A basic metric describing "flat" Minkowski four-dimensional spacetime looks like this $$\mathrm{d}s^2 = -c^2\mathrm{d}t^2 + \mathrm{d}x^2 + \mathrm{d}y^2 + \mathrm{d}z^2$$ This is the metric used in special relativity.

However, metrics can also be expressed in a variety of coordinate systems. Take, for instance, the Schwarzschild metric, describing spacetime outside a massive body. In spherical coordiantes, it is $$\mathrm{d}s^2 = -\left(1-\frac{r_s}{r}\right)c^2\,\mathrm{d}t^2 + \left(1-\frac{r_s}{r}\right)^{-1}\mathrm{d}r^2 + r^2\left(\mathrm{d}\theta^2+\sin^2\theta\,\mathrm{d}\phi^2\right)$$ There are other ways of writing this metric that make my next point better, but this form still works. There are two singularities in this metric: $r = 0$ and $r = r_s$, where $r_s$ is called the Schwarzschild radius. A singularity is basically a point in the equation where you are forced to divide by zero (Think of the graph of $y = 1/x$. You reach a singularity at $x = 0$). However, only one is a true physical singularity, at $r = 0$, while $r = r_s$ is called a coordinate singularity, which arises from our choice of coordinates. There are different ways of expressing the Schwarzschild metric that make this clearer; one example is in Eddington-Finkelstein coordinates.

$r = 0$ is the only true physical singularity, as I stated above; we can find this from analysis of the Riemann curvature tensor, which I won't get into because I have learned that I'm not exactly excellent at explaining tensors, and because it isn't central to my answer.

2) What is a singularity? Is it just the warping of space time that makes it this way?

A singularity is a point in space-time where the current physical models we use to describe forces and how particles behave break down i.e. gives us no information (or give us all the information) and thus no predictions can be made. Also a singularity can be described from different perspectives:

But it all falls back to what I mention at the beginning.

Not quite the answer but little more than a comment. Singularity, as pointed out by Stan Liou (a note about geodesic incompletness), can be understood as a point beyond which you cannot extend geodesic (shortest path between two points). This can be illustrated on conic singularity (like corner on a cube) on 2D sheet of paper.

If you pick two points on the sheet (like A and B in the figure which show part of unfolded cube), the geodesic is the shortest path connecting them, that is abscissa A-B. You can join A and the singularity (S) with geodesic, but you cannot extend it beyond S. For example, the geodesic joining A and C is the red line.

With black hole you have spacetime rather than 2D space, but you cannot extend worldline beyond singularity, it stops there. 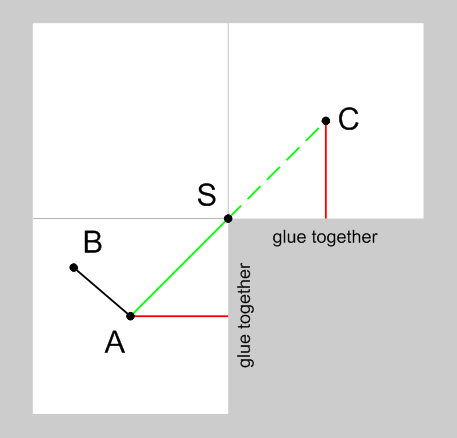 Not the answer you're looking for? Browse other questions tagged black-hole space-time or ask your own question.

46
Does matter accumulate just outside the event horizon of a black hole?
21
Explosions of black holes
5
Reshaping black holes to "push" the event horizon
6
What is the closest one could get to a black hole and still stand a realistic chance of escape?
6
Black hole collision animation: What are these extrusions?
3
Mathematical Analysis of Blackhole