I need help identifying a blob.

Last night I took a picture of Polaris, and there is a weird blob in it that I can't identify. Star charts and other pictures on the 'net do not show this blob. I took three pictures (with slightly different positions) and the blob has the same shape and position (relative to Polaris) in each. The blob does not exist in other pictures that I took (pointing in completely different directions).

Taken with a Canon t5i, 300mm lens, 3 minute exposure on a motorized equatorial mount. Viewing conditions were terrible, with lots-o-moon and smoke from forest fires. From Colorado.

Polaris is the brightest star, slightly left and down from center. Yildun, the next star in the handle of the little dipper, is near the upper left corner. The blob in question is very near, and slightly up and to the left of Polaris.

Under careful analysis, there IS lens flare, but it is where you'd expect it and not where the blob is. If you draw a line though Polaris and the center of the frame, there is a flare on the opposite side of the center and the same distance away from the center as Polaris is.

Schmutz in the camera: I don't think it's dust/dirt in the camera/sensor. If that were the case then I would have seen it in other photos from the night, and I didn't. Also, the blob would have stayed in the same position in the frame and not moved with Polaris as it did in the 3 different photos that I have of it.

Not-So-Simple Lens Flare: Maybe. Although I cant imagine how this would happen unless some lens elements were not radially-symmetric and/or elements were not lined up on a common axis. But I don't know everything about camera design so maybe this is possible?

There's a new blob in the sky: Possible. Although I think the odds of "user error" are much higher. Maybe someone else wants to take a new photo of Polaris? (wishful thinking) 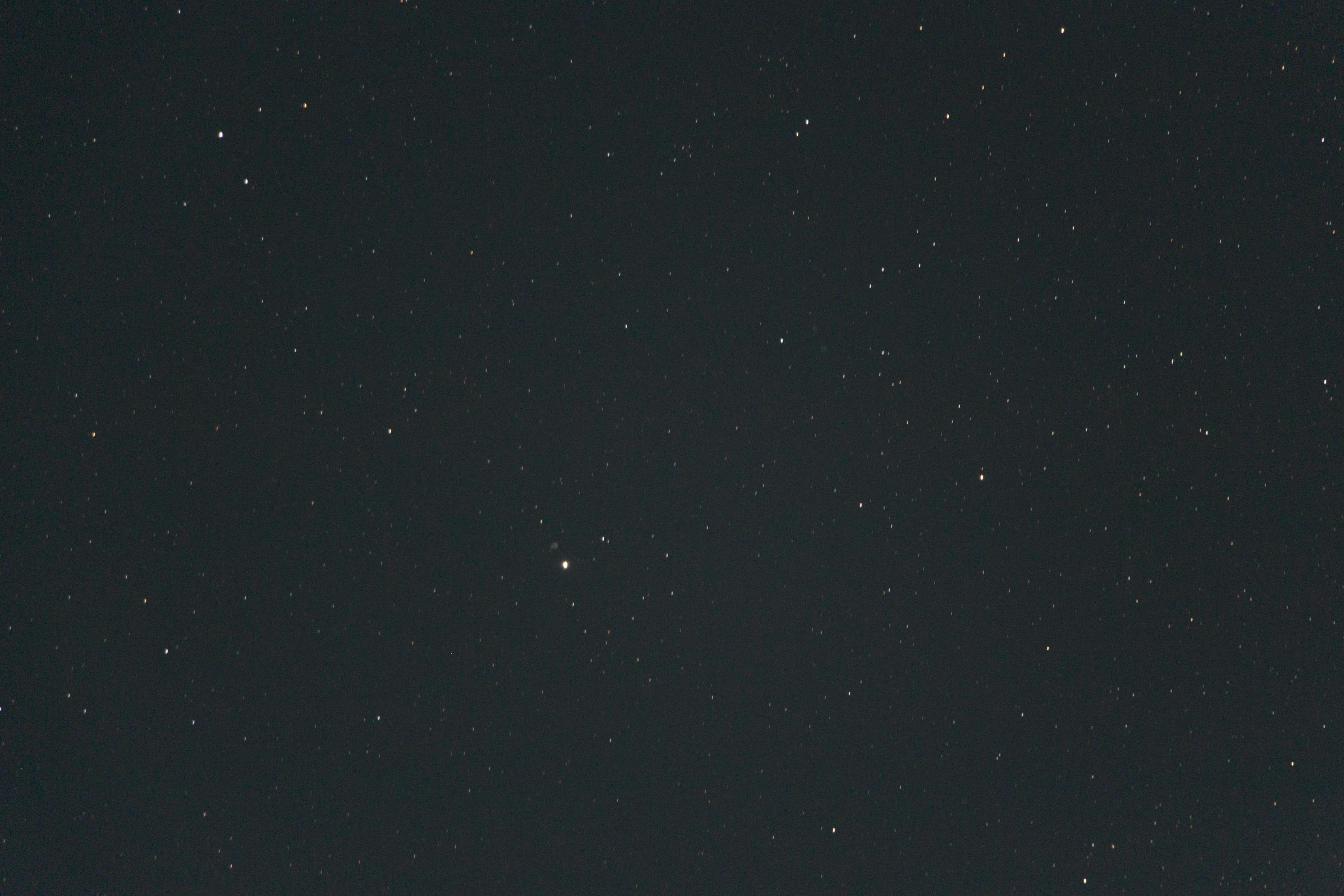 That looks like a lens effect. Polaris is the brightest object and there is an internal reflection in the lens or the camera.

It's a nice photo under difficult conditions. Can you see NGC 188, an odd open cluster?

Looking around in the central area, I found a 2nd pair of objects that do not look like stars. The upper one is a line but much longer than the trails of the other stars, and the lower one is also a fuzzy blob.

If neither of these correspond to real objects either, then you have some kind of contamination on your sensor perhaps. Your comment says ...The blob moves relative to the stars... in other exposures. If so, perhaps it does not move with respect to pixel coordinates?

As an aside, the short linear feature could possibly be a satellite in a very high orbit and so will appear to move quite slowly relative to the star field that your mount is tracking. 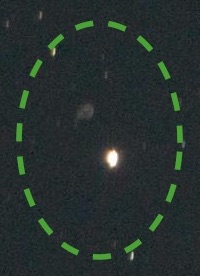 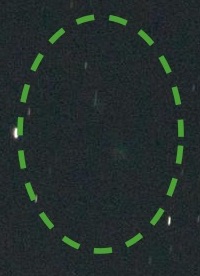 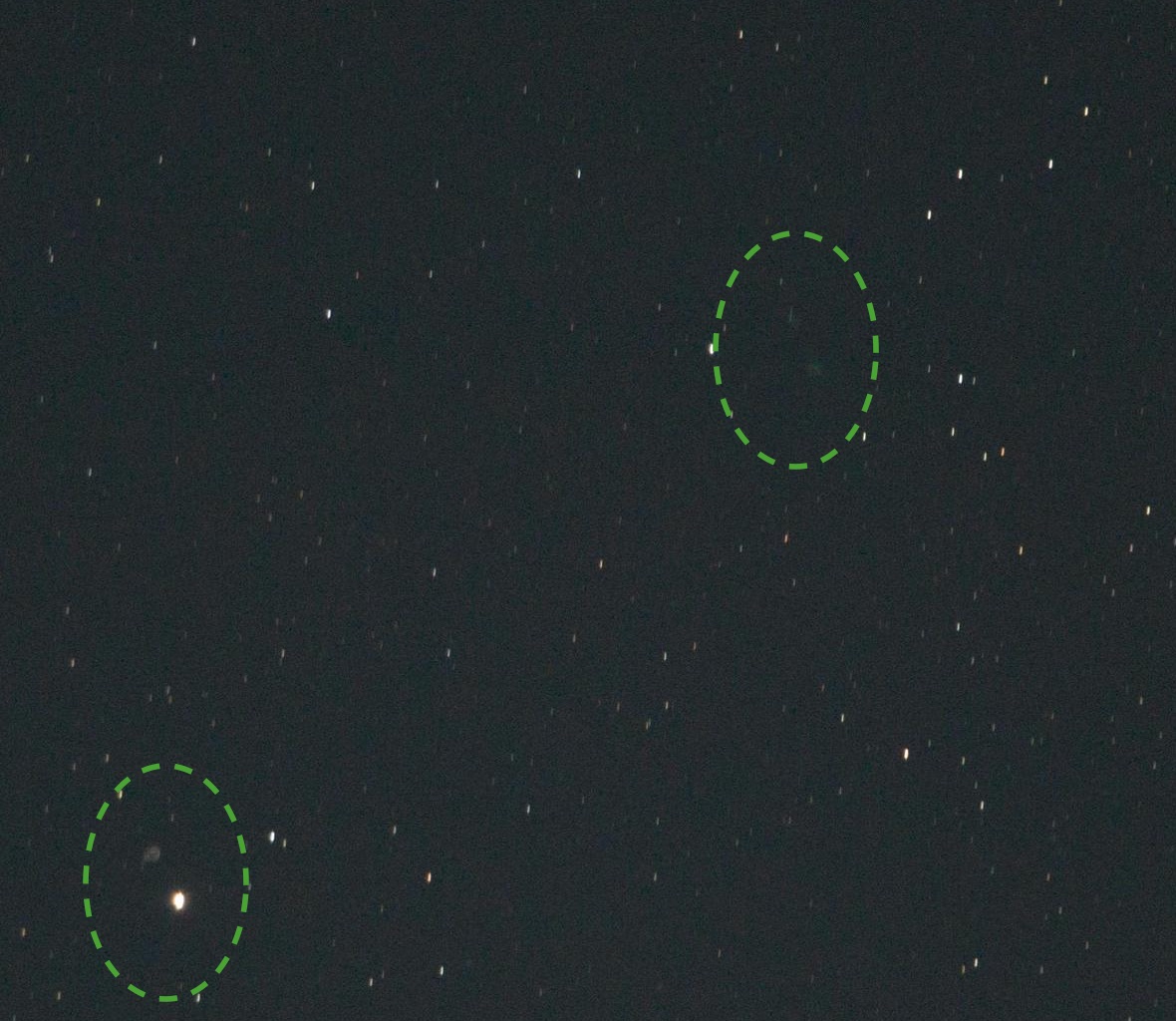 Not the answer you're looking for? Browse other questions tagged photography identify-this-object or ask your own question.

12
Sky photography through compositing images in software?
14
How to identify stars in photographs?
1
Having some weird issues with my tracking (Advanced VX)
0
How to photograph Saturn
1
A real light source, or an artifact?
19
What did I photograph?
4
What's going on in this photo of Halley's comet's tail?
14
Does this photo show the "Little Dipper" and "Big Dipper"?