What specific parts of the Milky Way do we see when we look up?

I know we can't see the center. But do we see any of the central bulge? Are we just seeing nearby stars in the Orion Spur where we are? In the Sagittarius Arm? In the other direction, are we seeing any of the arms further out from ours? Where are the dust clouds we see, in relation to these arms?

But do we see any of the central bulge?

With the naked eye and a dark sky, the galactic center is brighter than other areas of the galactic plane. Some of the light from that region does make it to earth to make that direction identifiable.

If you look at the ESO night sky composite from Brunier and Tapissier (which is approximately what someone could see with the naked eye given dark skies and good viewing), you can see that while the galactic center is brighter, other directions along the plane seem fairly similar. That makes it very difficult to say what fraction of scattered glow is coming from one arm or another. It all just blends together.

If all we can see are stars in our galaxy that are relatively close to us, then the Milky Way should look relatively uniform, right?

Not necessarily. The visible part of the galaxy is relatively thin. It doesn't have a fixed distance, but a commonly quoted one is 1000ly. That means that even if light were magically cut off at 3000ly or so, it could appear non-uniform.

The Universe Today has a great video on just this topic:

EDIT to clarify:
If you look in the direction of the constellation Sagittarius, you're looking towards the center of the Milky Way Galaxy. You're correct that we can't see all the way to the center because of obscuring dust. Since we're looking out from inside one of the spiral arms, we can only see about 1500 light-years, which amounts to roughly 1.5 - 2% of the Galaxy's diameter. 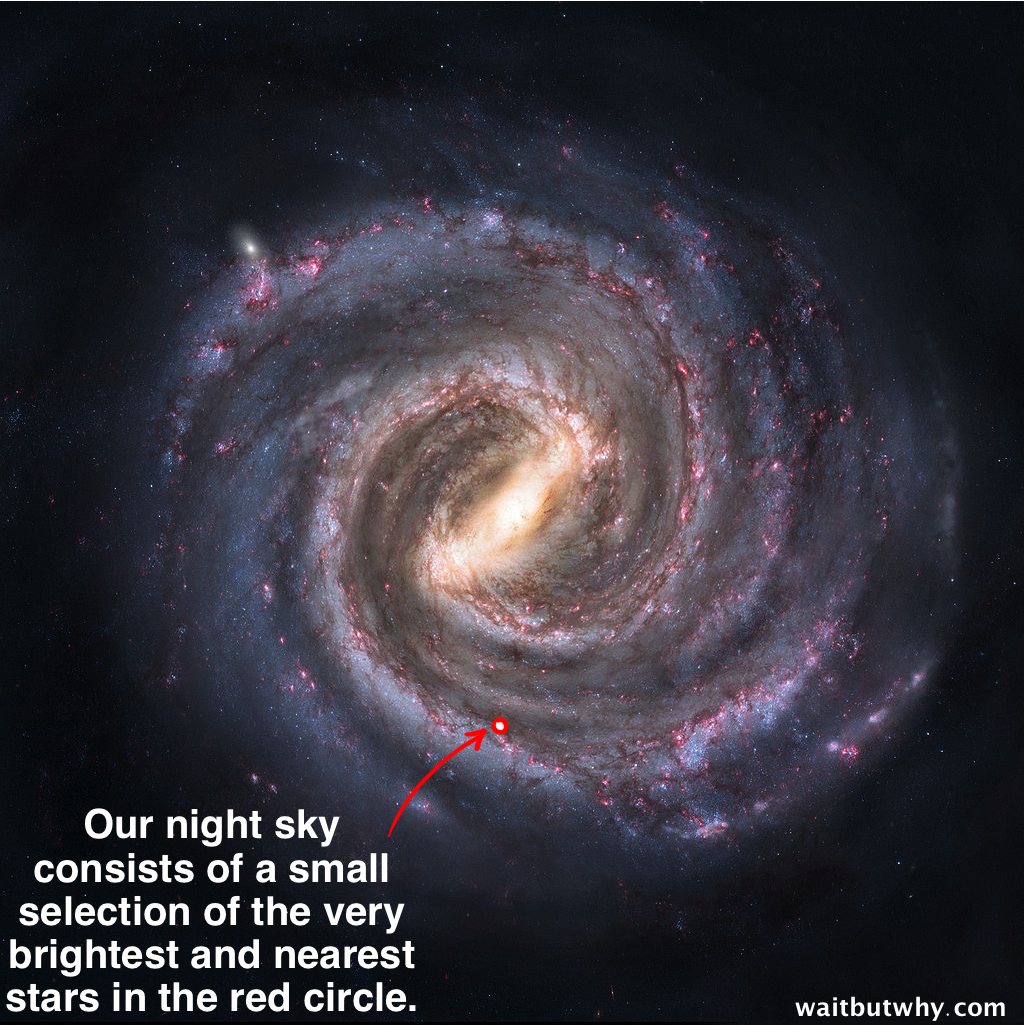 So, to sum up, the answer to my question is that on a clear night, in the right position, with the naked eye you can see the central bulge of the Milky Way galaxy, even though it's up to 26,000 light years from Earth. You can't identify the particular spiral arm that you are seeing, in any direction, as such. But you can locate, at least with a telescope if not the naked eye, objects that are in our Orion Spur, the Sagittarius Arm, and the Perseus Arm in the other direction.

Not the answer you're looking for? Browse other questions tagged milky-way .

14
Why don't we see the galaxy center?
4
Which spiral arm of the Milky Way is Kepler-62 in?
6
What is in the brightest area of the night sky?
8
What is the shape (along the plane, not up-down) of stellar orbits in flat spiral galaxies
12
Why don't we see "the milky way" in both directions?
0
In which direction does the Milky Way rotate?
14
What will happen to the shape of a galaxy when a super massive black hole lying in its center dies(evaporates out)?
10
Why the blank wedges in this very early 21 cm map of the Milky Way? (Oort et al. 1958)
46
Does the sun cross other spiral arms in its movement around the galaxy's center?
13
Is it true that we see the center of the milky-way for only half of the year?