Mountains on the moon during solar eclipse?

I ask myself the reason of why the sun in not uniform on the edge of the moon at this moment of the eclipse (cf. picture) is not unifom is because of the mountains of the moon ? Or can it due to erruptions of sun ? If not is there another reason to explain that ? 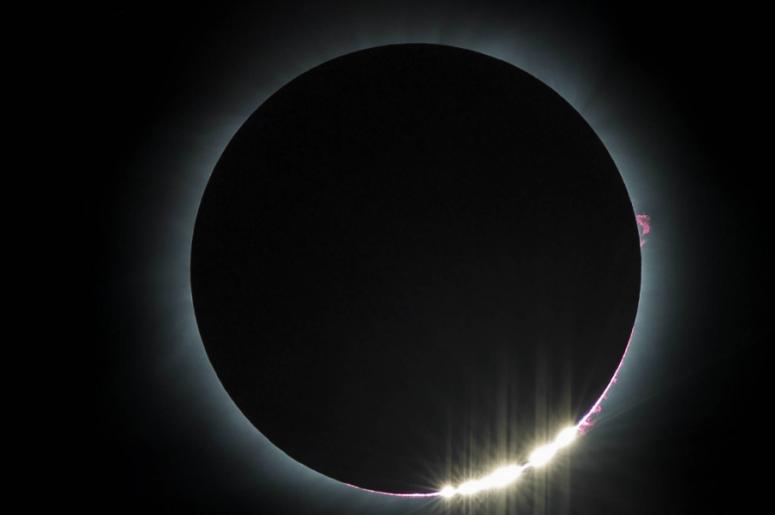 The beads of bright light can be seen thanks to the Moons rugged topography. They're called Baily's beads in honor of an English astronomer who explained the phenomenon, Francis Baily.

In the photograph you posted, you can also see Solar prominences. It's plasma ejected into the corona. Its temperature is lower than that of the coronal plasma and it emits more visible light.

Wikipedia says that Francis Baily explained Baily's beads by different elevations on the Moon' surface in 1836. However, it is possible that earlier astronomers also explained them by mountains and valleys on the Moon.

I have read somewhere that when Galileo observed the Moon with a telescope c. 1620 and saw mountains and craters and "seas" on the Moon, Johannes Kepler said that he already knew the Moon had different elevations, without a telescope. As I remember, Kepler said that his astronomy teacher used a camera obscura to project an image of a solar eclipse showing the jagged edges of the Moon's surface.

So if my memory is correct Francis Baily may have independently found an explanation that had earlier been found by a German astronomer, probably Michael Maestlin (1550-1631).

Not the answer you're looking for? Browse other questions tagged the-sun the-moon solar-eclipse or ask your own question.