Collimating with a home-made collimation cap

I've made a home-made collimation cap and am trying to use the procedure linked to in another answer.

However, I've run into two issues right off the bat. In this picture from the linked page, it shows a "primary mirror donut". All I see is a black circle with nothing in between. I'm using a piece of bright white paper that I printed the alignment patterns on to attach to the eyepiece and I thought this would be bright enough to see, but apparently not.

The second issue is that this method seems to rely on there being four "spider vanes" which are holding the secondary mirror in place. However, my telescope only has one, making it seemingly impossible to line anything up.

Here is what it looks like through the cap: 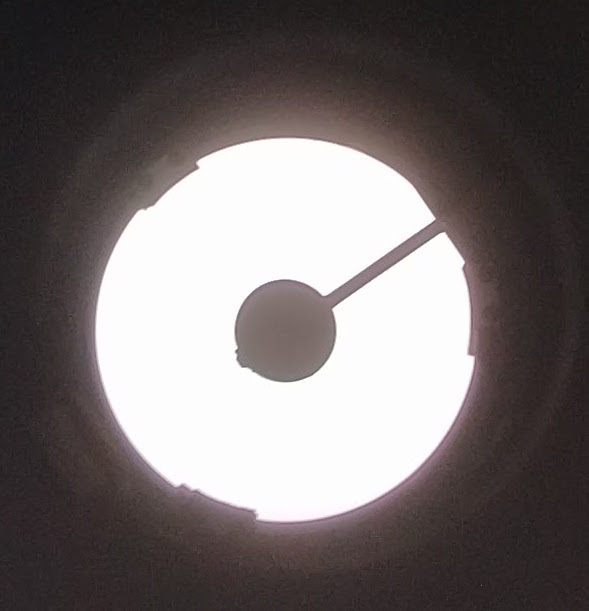 It looks like the dark circle in the middle it fairly well aligned, but I can't tell for sure if it needs any adjustment. And I'm not sure how to deal with the fact that there is nothing inside the circle to align with. I have tried taking an LED flashlight and shining it on the top of the paper while i look through the pinhole and if I focus the LED circle on the edge of the paper at 90 degree intervals it appears to be aligned, but I don't know if this is sufficient.

Incidentally, the halo around the outside seems to be the edge of part of the inside of the side tube, and it does not move when I adjust the collimation screws.

The Gary Seronik website that you cite is a good one - it's not leading you astray!

There are a couple of important things to look at:

Don't worry about only having one support rather than four. The key will be to identify your centre dot (you can just see it on Seronik's webpage, first picture ) and to see how it is centred when you look through the collimation cap onto the secondary.

Not the answer you're looking for? Browse other questions tagged newtonian-telescope collimation or ask your own question.

22
How can I collimate a dobsonian telescope with a laser collimator?
1
Working with high-magnification eye-pieces
1
How to view Jupiter with 4.5" Newtonian Reflector
6
Telescope collimation issue
3
Newtonian reflector collimation question
2
What are these three black cap-like pieces?
1
Celestron C14 collimation and cleaning