What is the physics of the "spinning dust" contribution to Cosmic Microwave Background measurements?

The lengthy paper Nine-Year Wilkinson Microwave Anisotropy Probe (WMAP) Observations: Final Maps and Results mentions "spinning dust" about 51 times. It is a potential contributor to the measured spectrum and the details of its emission spectrum has more than one proposed model.

question: Is there a simple way to understand the physics behind the emission spectrum of spinning dust and how it would differ from non-spinning dust? 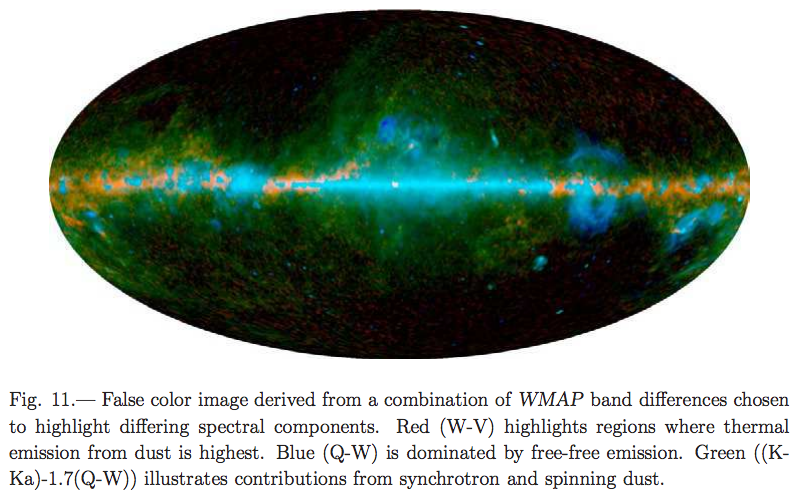 "Spinning dust" is a mechanism proposed to explain a particular feature in the foreground emission of CMB; a bump around $\nu\sim20\,\mathrm{GHz}$.

Dust grains acquire charge through photoelectric emission and collisions with electrons and ions (Draine & Lazarian 1998). As zephyr comments, if the dust is a poor conductor, its charges will, in general, be unevenly distributed, causing small dust grains to exhibit an electric dipole moment $\mathbf{\mu}$. But the molecules making up the grains may themselves have a dipole moment, and even a perfect conductor will, in general, have its charge centroid displaced from the mass centroid (Purcell 1975).

Collisions and radiation may cause the grains to start spinning, and in the presence of magnetic fields (which are very common in the interstellar medium), this spin in turn causes the particles to emit radiation with a power $P$, according to Larmor's formula which for a rotating dipole can be written as: $$ P = \frac{2}{3} \frac{\mu_\perp^2 \omega^4}{c^3}. $$ Here $\mu_\perp$ is the component of $\mu$ perpendicular to the rotation axis, $\omega$ is the angular frequency of the rotation, and $c$ is the speed of light.

The emitted radiation matches the rotation frequency which lies in the (tens of) GHz-region, corresponding to wavelengths in the microwave region.

In contrast, the radiation from non-spinning dust will be thermal, thus lying in the infrared.

Note that spinning dust also emits thermal radiation, and in fact thermal fluctuations within the grains cause the charges to shift around quite rapidly, changing $\mu_\perp$ and $\omega$ (Hoang et al. 2015), thus effective smearing out the spectral lines.

A symmetrical dust grain will arguably be hit by particles/photons, on average, as much from one side as from another. A mechanism to accelerate an asymmetrical grain's spin is proposed by Purcell (1975). Below is Fig. 1 from his paper. A particle that strikes in a concavity is more likely to interact with the grains twice. If the gas it colder than the grain, it will be heated and leave the grain with a larger velocity than it entered with, causing the grain in the figure to start spinning counter-clockwise; it the gas is hotter (which is more often the case), it will cause the grain to spin clockwise. 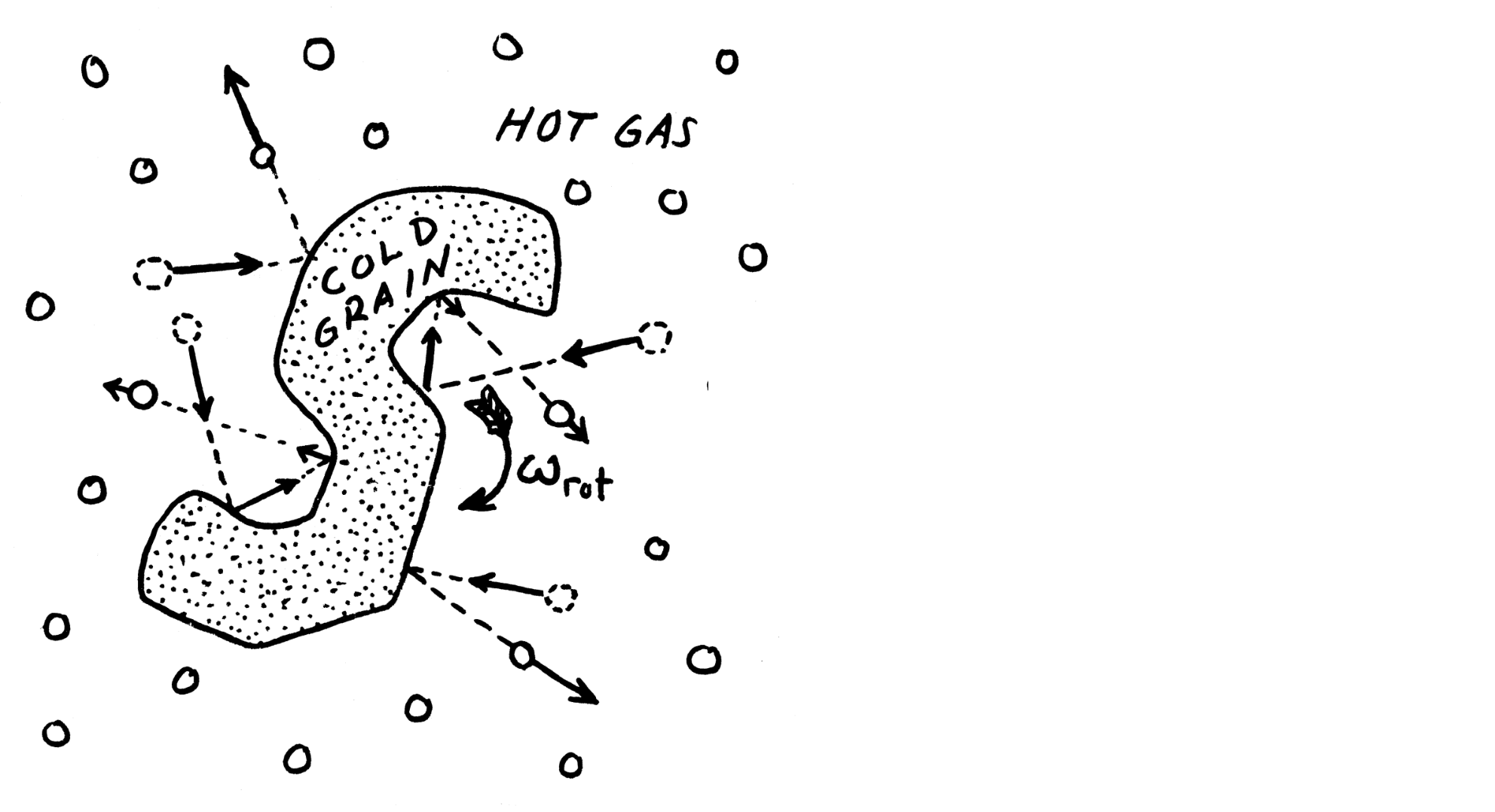 Not the answer you're looking for? Browse other questions tagged cmb dust .

5
How small could an orbital system be in our solar system?
3
Why doesn't the equipartition theorem disallow spinning dust?
0
Has "GHz-spinning dust" ever been demonstrated in the laboratory?