Is the age of the universe relative to an observer's location in that universe?

According to Wiki the age of the universe is 13 billion years old, and I was taught that background radiation made the universe uniform in all directions.

Doesn't this define a sphere of space in the universe with Earth at the center? This sphere would have a radius of 13 billion light years.

We (on Earth) could not see anything outside this sphere. As light did not exist more than 13 billion years ago. So for us this defines some kind of edge for the universe.

But what happens when an alien in another galaxy 5 billion light years away from Earth also looks towards the stars. Don't they see a uniform background radiation and measure the same age of the universe?

That alien would also have a sphere of 13 billion years.

So we have two spheres, one for Earth and one for our alien friend.

These two spheres would overlap each other by 5 billion years. Which means, if we look in the opposite direction from that alien's galaxy. We can see an additional 5 billion years further than they can.

If we measure the total width of the two overlapping spheres we get a distance of 18 billion light years.

I now grasp my hair in confusion. Is this possible that two visible spheres could overlap to create a distance longer than the oldest ray of light? And from there I fall into more questions. Can two people measure the same universe age from different spots in the universe.

That's why I think my idea is is wrong, but how could it be wrong and why?

You are labouring under the misapprehension that how far we can see directly gives the age of the universe. Whilst it is true that the oldest light we can see was emitted some 13.7 billion years ago, the stuff that emitted that light is now roughly 46 billion light years away, thanks to expansion of the universe.

The universe itself probably extends significantly beyond this and may be infinite. That does not conflict with the big bang model or relativity. If the universe is infinite then it has always been infinite. Places that are separated by more than the oldest light ray as you put it, are not in causal contact and, depending on the cosmological parameters, may never be.

In a homogeneous, isotropic universe (and don't forget we can only make assumptions about regions beyond our observable universe), all observers would agree on the age of the universe and that the universe was once very much smaller and all would see (on average) the same sort of universe in all directions.

To ensure that places that are outside of causal contact now are homogeneous requires that they were in causal contact in the past. This is the nature of the "horizon problem"".

I took the picture below from the "slideplayer" website, I am unsure who the originator is, but it serves its purpose here and I think encapsulates your question. It appears in this diagram that A and B can never have "communicated" and can never have originated from the same place. The solution provided by inflation is to have a massive exponential expansion of space in the first fraction of a second. In short, the distances between points in space (or galaxies if you like, although there were no galaxies at the epoch of inflation) are suddenly increase by many, many orders of magnitude. This give the appearance of faster-than-light motion, although the cosmic speed limit only applies to local measurements and not to the expansion of space itself. The end result is a universe that appears homogeneous well beyond the limits of a radius of the age of the universe in light years. 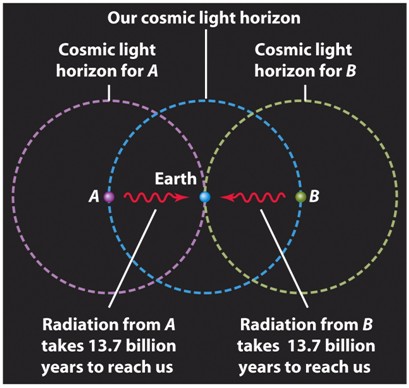 Well, the “first” hypothesis was that the universe is infinite and the number of space objects is infinite. Then, the Big Bang theory came along and we found out that our universe is roughly 13 billion years old and the radius of the observed universe is 13 billion light years, and we postulated that the Universe is probably connected: there’s no edge and if you could stop time and move in one direction you would probably arrive at the same point just like you would do on the surface of the Earth. Now we know that it was not a very precise idea: the radius of the observed universe turned out to be a bit larger: around 14 billion years, and it happens that the most distant galaxies move away from us faster than light, so this radius (14 billion years) is only the radius of the currently visible universe (we see how it looked 14 billion years ago when the universe was much smaller). Now this radius has reached 45 billion light years but we can only see the past (or 14 billion years). So wee see the past, not the present size. The fact that the galaxies that are very far away from each other move away from each other faster than light is attributed to the expansion of the space itself and doesn’t violate the General Theory of Relativity (we may say it makes it somewhat imprecise, just like relativity made Newton’s theory slightly imprecise). Our space is sometimes illustrated as an elastic rubber band on which the farther away two points are, the faster they will move apart, when you extend the rubber band. And our space is expanding in somewhat similar fashion. We don’t see the invisible part of the universe (the whole universe may be 150-600 billion light years in diameter -- this size will never be visible and it's much more than the distance of 45 billion light years to which the most distant visible galaxies must have moved by now but we still observe them as if they were 13-14 billion light years away). Also we don’t know if our universe is infinite or finite. You can imagine a finite one as a “connected universe” that is if we could stop time and go in one direction eventually arriving in our starting point. If, however, it is not the case and our universe is open and not connected, we may call it infinite. The both theories are fine. Unfortunately we don’t know which one is correct! If the Universe is not connected, there might be abnormalities like “edges”, I mean, there may be a point in Universe where galaxies end and there are no more galaxies further beyond or something much weirder than that. This is unfortunately beyond our visible Universe and we have no way of knowing.

Another thing is that your question revolves around the concept of space. Well, it’s roughly three-dimensional in real life, if we don’t consider very small (as in quantum mechanics) or cosmologically large distances. Yet, we know that our space might warp, so things are not that simple. Right now we don’t know much about the actual configuration of our metric space.

As I see, many folks have difficulty in imagining the connected Universe. Well, let’s simplify everything greatly. Let’s say our Universe is just like Earth, and let’s imagine Earth grows in size, so towns that are far away from each other move away from each other the fastest. Then you can take the length of the equator and call it the diameter (or just use it instead of the diameter) of our “test” universe. Half the distance of the equator will be the radius (or just use it instead of the radius) of our “test” universe, and it will be the same everywhere, and everything will be expanding as we initially postulated. It explains the paradox with aliens and two circles you mentioned. Note that towns are not growing in size because, as is the case with galaxies, we presume here that our towns are held by "gravitation" from expanding. Also note that we use the surface of the Earth in this example, which is two-dimensional, and the universe is three-dimensional (probably, or, let’s say, approximately to avoid imprecision). Hope, this primitive spherical illustration is of some help.

Here is an explanatory and helpful quote from the article Metric Expansion of Space from Wikipedia:

The universe could be infinite in extent or it could be finite; but the evidence that leads to the inflationary model of the early universe also implies that the "total universe" is much larger than the observable universe, and so any edges or exotic geometries or topologies would not be directly observable as light has not reached scales on which such aspects of the universe, if they exist, are still allowed. For all intents and purposes, it is safe to assume that the universe is infinite in spatial extent, without edge or strange connectedness.[15] Regardless of the overall shape of the universe, the question of what the universe is expanding into is one which does not require an answer according to the theories which describe the expansion; the way we define space in our universe in no way requires additional exterior space into which it can expand since an expansion of an infinite expanse can happen without changing the infinite extent of the expanse. All that is certain is that the manifold of space in which we live simply has the property that the distances between objects are getting larger as time goes on. This only implies the simple observational consequences associated with the metric expansion explored below. No "outside" or embedding in hyperspace is required for an expansion to occur. The visualizations often seen of the universe growing as a bubble into nothingness are misleading in that respect. There is no reason to believe there is anything "outside" of the expanding universe into which the universe expands. Even if the overall spatial extent is infinite and thus the universe cannot get any "larger", we still say that space is expanding because, locally, the characteristic distance between objects is increasing. As an infinite space grows, it remains infinite

You may want to read the full article. I think it’s not bad and roughly in line with modern science. It’ll give you way more information than my simplified explanations. You may also want to get acquainted with the four-dimensional Euclidean geometry – I think it might make some things easier to grasp when talking about our metric space. So, I recommend the article Metric Expansion of Space in Wikipedia as a good starter – I hope it’s not very challenging.

PS: Please note that my explanations are substantial simplifications. Various topologies of the Universe or metric space (various combinations in terms of finiteness, infinity, connectedness, and curvature) might be theoretically possible. Let me add one more advanced notion here: Wheeler suggested that the topology of space-time might be fluctuating (space-time foam), thus bringing quantum mechanics into here. Well, I guess, we still have a very limited knowledge when it comes to our actual metric space.

Not the answer you're looking for? Browse other questions tagged universe light general-relativity age or ask your own question.