I know not all stars can "go nova", and that of those that do there are different types of novae, among which are some that aren't even explosions (at least not as we think of them), and that even the ones that are explosions are really not like what we do with TNT or C4 anyway.

Nonetheless, I can't shake the comparison from my head, and that got me thinking: Are there any circumstances under which one star going nova can trigger novae in other nearby stars, creating a chain reaction?

Let's say the average distance between "nearby" stars is a few light years. Let's say an average supernova is like the recent one in the M82 galaxy. That supernova, at, say, 10 light years, would be less bright and less hot than the Sun as seen from Earth. To make that supernova appear as bright and as hot as the mid-day Sun, you'd have to be at 1/3 light years from it (the supernova would have to be in the middle of the Oort cloud).

Interstellar distances are stupendous. Even a supernova cannot do much to compensate for distance.

But what if the stars are very close to each other? They would pretty much have to orbit each other, forming a double star. Moreover, both would have to be on the verge of going supernova. That's a pretty unlikely situation.

Even then, there are many kinds of supernova. There's type Ia, where a dwarf orbiting a red giant leeches too much material from the giant and eventually explodes: 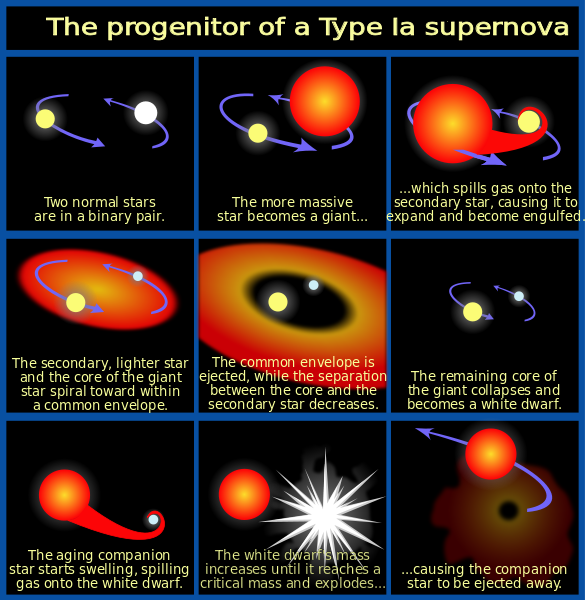 Then there's the core collapse supernova, where a star is simply too bloated and too old to sustain enough pressure in the core; the core collapses into itself due to gravity and re-ignites fusion, effectively exploding like a bomb and ejecting the outer layers: 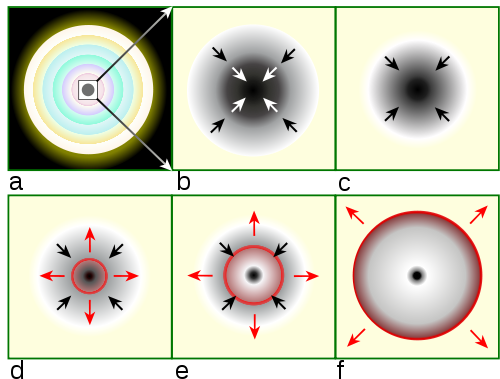 Is a nearby stellar explosion going to increase instability in its about-to-blow-up companion, or is it going to reduce its chances of exploding? The answer is not trivial.

Bottom line: I wouldn't say it's mathematically impossible, but it's a combination of quite unlikely scenarios. In a "normal" galactic neighborhood like ours, it's never going to happen.

Not the answer you're looking for? Browse other questions tagged star supernova .

8
Can we compress any object to create black Holes?
0
What is the last nuclear reaction in a binary system before supernova?
6
Do supernovae produce powerful gravitational waves?
2
Mechanics of Supernovae
18
How often do supernovae occur?
31
Why don’t supergiants at least start to fuse nickel into even heavier elements before going supernova?
6
Missing supernovae in the Milky Way
2
Spectra of different stellar classes?
4
Infall velocity in core-collapse supernovae