Are the darker blue/black areas in this picture what the atmosphere of Jupiter looks like without clouds?

This is a picture (mosaic?) of Jupiter's south pole taken by Juno (also shown below). It has gotten a lot of press, but I haven't seen anything, even in the scientific paper that accompanied its release, that answers the first question that came to mind when I saw it : is this a view into the inside of Jupiter? I seem to recall seeing IR images of Jupiter where the poles appear quite hot, which would be consistent with a "clear sky" providing a view of deeper, hotter layers. But how deep can see in this picture? 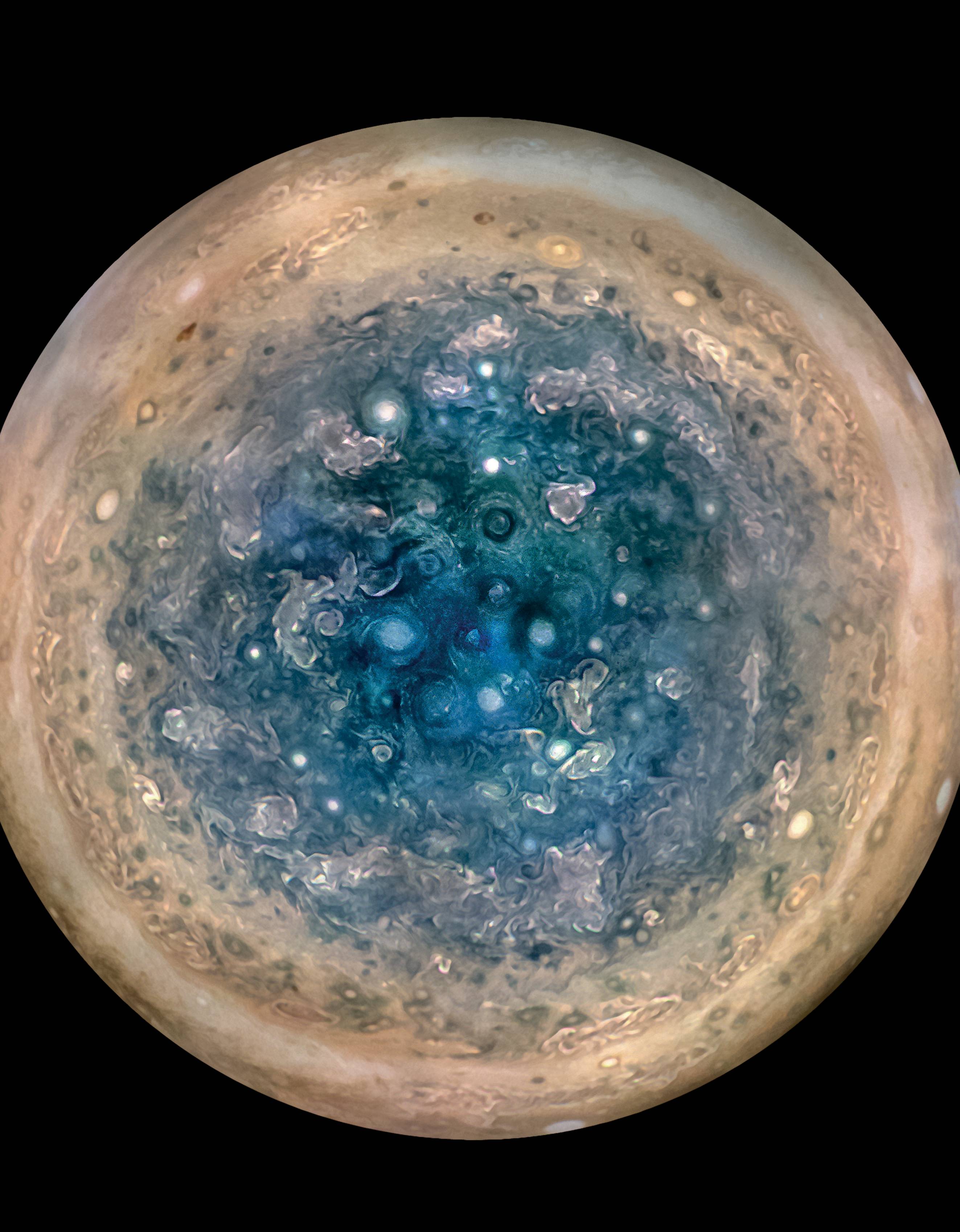 My question is whether part of the south pole of Jupiter is cloud-free, at least to a depth where atmospheric extinction limits our ability to see the clouds. This interpretation of the picture would assume that blue light penetrates deeper than red light into the atmosphere (clouds not included) of Jupiter, and that this is the reason that some of the clouds, presumed to be deeper, look blue, while some areas between them are essentially black.

Here is an example of a picture of Jupiter in IR, which shows the poles as being relatively hot. The troposphere of Jupiter (or any planet) is generally hotter the deeper you go, so the poles appearing hotter is consistent with less cloud cover at the poles. [

I'm aware that perhaps no-one, including the Juno team, knows the answer to my question. Some useful partial answers would include an estimate of the depth to which visible light could penetrate Jupiter's atmosphere in the absence of clouds, and whether blue light would penetrate deeper than red.

userLTK's comment is correct, you cannot see very deep at all.

Information about the image

First off, there are three imagers on the Juno spacecraft: JunoCam, UVS, and JIRCAM. You can see a full list of instruments here. JunoCam is described as a:

visible-light camera/telescope of the Juno Jupiter orbiter, a NASA space probe launched to the planet Jupiter on 5 August 2011. It was built by Malin Space Science Systems. The telescope/camera has a field of view of 58 degrees with four filters (3 for visible light).

The image you're seeing was taken by JunoCam and is a visible image. In fact, this image is combined by images taken over multiple days and from multiple orbits to get different vantage points and show all areas lit up. It isn't however a mosaic $-$ the 58 degree field of view allows JunoCam to image the entirety of Jupiter in one image. Instead, this image is simply the carefully crafted combination of many different images of the south pole.

How deep are you seeing into Jupiter?

Not very deep at all. Because the image is in the visible spectrum, the depth into Jupiter before it becomes too opaque is going to be very, very short. You may not even be seeing down to Jupiter's "surface" where the atmospheric pressure equals 1 bar.

Incidentally, JIRCAM can see down to about 5-7 bars if its lucky, enough to penetrate the very upper layers of the atmosphere.

Infrared images of the poles

Obviously I can't be certain what you saw before concerning infrared images of Jupiter's poles, but my guess is they may have been something like the image below. This image was taken by JIRAM 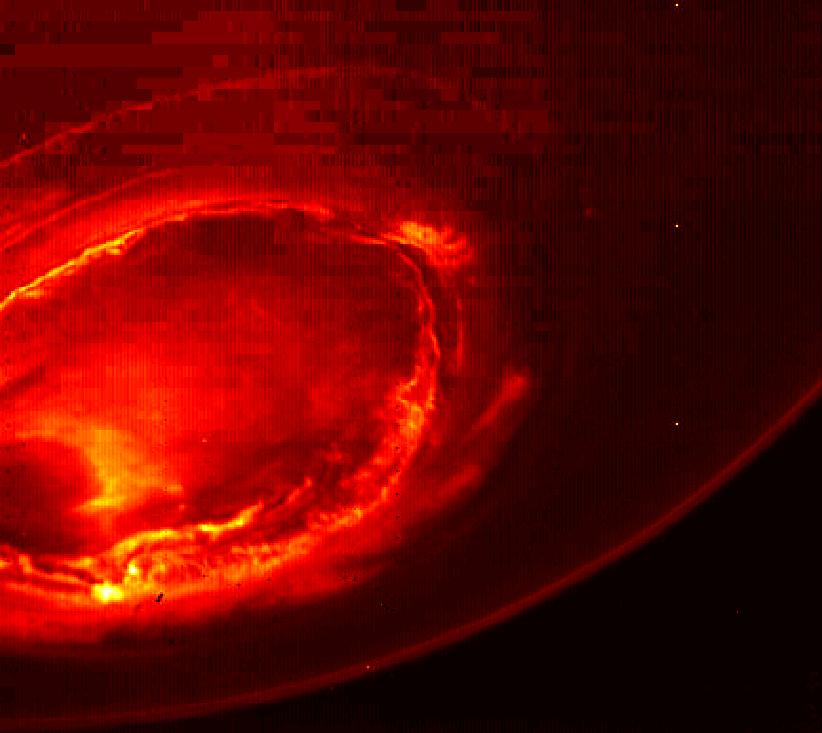 1
What is the boundary in the atmosphere seen in this video?
5
What are the cloud-like blobs in the Martian southern hemisphere?
1
What is the fifth moon-like object I saw around jupiter through my telescope?
4
What is germane doing in the atmosphere of Jupiter?
1
What are the real conditions for the creation of an atmosphere/loss of an existing atmosphere?
3
Is the moon inside earth’s atmosphere? If so, what are the consequences?
2
What if the atmosphere of Titan were like the one on Venus?
6
What weather is present in Jupiter's Great Red Spot?
6
Why do the upper-atmosphere clouds of Venus appear to have that V shape?
6
How are sulfuric acid clouds able to completely cover Venus?