Would space-faring vehicles in interstellar space be in pitch darkness, show reflections from the nearest star or be bathed in light completely?

This is not a science fiction question, but I was considering the visual accuracy of ships in space depcicted in Battlestar Galactica and the like. They are always strongly lit.

If they are in between stars, would they be visible at all or bathed in light equally on all sides? 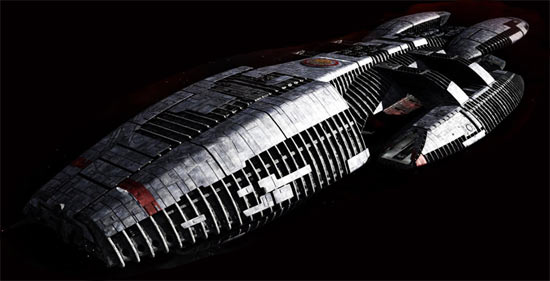 Pursuing it further, at what distance from a star does an object no longer reflect it's light as the dominant light source and after that is it dark?

The brightness of the spaceship follows (almost) the inverse square law, meaning twice the distance from the star, the brightness will be a quater. In the middle of nowhere, but within a galaxy, it would look like in a moonless, and cloudless night, far away from any artificial light source. It wouldn't be pitchblack, but much too dark to read a newspaper. You would see the stars in the background, and the fuzzy band of the Milky Way. The starship would occult the stars; that way you would see the black silhouette of the starship.

At 630.1-fold the distance of the Earth from the Sun (about 3.65 light-days), it would look like at full moon (derived from apparent magnitudes of full moon and Sun)

But maybe the starship is illuminated artificially.

Not the answer you're looking for? Browse other questions tagged interstellar-travel or ask your own question.

3
Does near light-speed travel doppler-shift the light from the target into gamma rays?
1
How would vehicles travel through the interstellar medium with its such low density?