What explains this puzzling radio signature from a fireball?

September 21, 2017 a bright fireball over Holland was reported by hundreds of people. Several all-sky cameras recorded it as well as a special radio beacon set up to capture radio signatures of meteors - the BRAMS beacon at Dourbes, Belgium.

I'm puzzled by what I see in the radio spectrogram from one of the BRAMS stations at Ophain, Belgium : 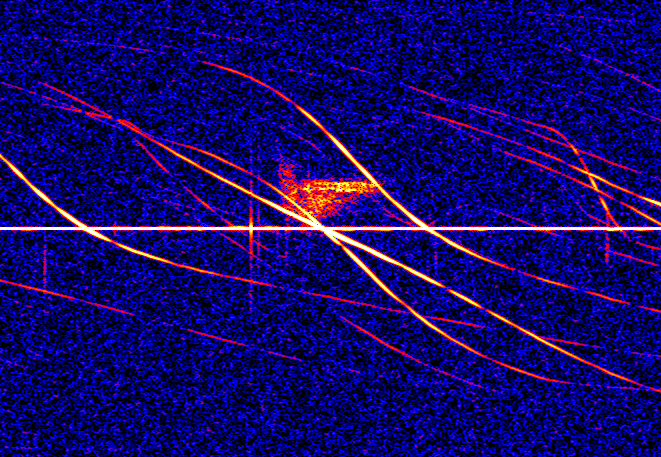 The orange blob in the center is the radio signature of this fireball. The horizontal line is the beacon signal (0 Hz), time runs horizontally, frequency runs vertically, positive above and negative below the beacon line. What is displayed are Doppler shifts.

The only way I can make sense out of this is to assume that the ionized gas trail from the fireball reflecting the radiowaves was NOT receding from the receiver and transmitter beacon - only the fireball was?!

Or are there any other explanations?

I checked with the people who run the BRAMS project and they confirmed my reasoning, and added another possible explanation.

Even if the fireball moves away from the receiver AND transmitter, the ionization trail it leaves behind can expand and be blown by mesospheric winds towards the receiver and/or transmitter. It's this trail that mostly reflects the radio waves.

And theoretically it's still possible but unlikely that the observed Doppler signal was coming from another meteor trail unrelated to this particular fireball, but coinciding with the exact time frame the fireball appeared in.

Not the answer you're looking for? Browse other questions tagged meteor radio or ask your own question.

2
How do astronomers at SETI know if they received intelligent radio signals from other planets?
3
Why levels of radio contours maps are given in mJy/beam and what does it mean?
3
Current delay for radio signals from the Mars InSight mission
3
How was this interstellar fireball observed and its trajectory analyzed?