How is the total mass of all the Solar System's small asteroids and meteoroids estimated?

This diagram from wikipedia (shown below) graphs asteroid Diameter against Number of asteroids, for the Solar System. (Graphic is courtesy of the Marco Colombo, DensityDesign Research Lab).

Presumably the Diameter data for the larger asteroids is strongly supported by observations. But for progressively smaller bodies direct observational data is presumably less available.

The pattern shows a strong, but not perfect, linear inverse correlation between log(Diameter ) and log(Number). This seems quite reasonable for large bodies. It also sounds plausible that such a pattern continues into the realm of small asteroids and meteoroids.

But what is the physical justification for extending the log:log pattern into the realm of small bodies which are too small to see from Earth? Presumably the current estimate of the total mass of the Astroid Belt (4% of the mass of the Moon) is consistent with this distribution model. But can we confidently rule out the possibility that the linear log:log pattern breaks down for small objects allowing, for example, a much larger number (and mass) of small bodies to be present in the Asteroid Belt, sufficient say for the total combined mass to equal 100% of our Moon's mass? 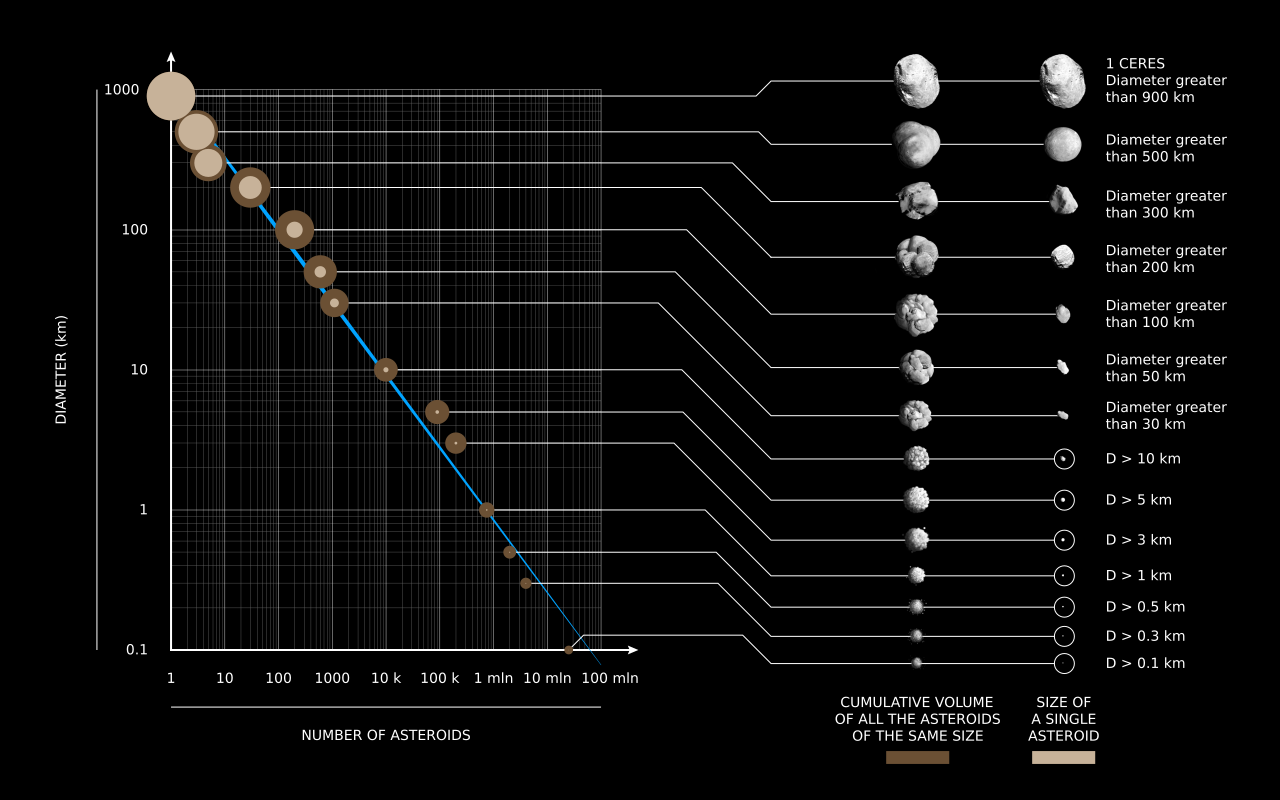 Short Answer: The simple power law which applies for larger asteroids and comets actually doesn't extend that well to smaller bodies and shouldn't be trusted too much in that range.

You're right to be suspicious of using a simple power law to relate asteroid size to quantity at small sizes. Especially because there are known deviations from that power law at certain radii. As wikipedia notes:

The number of asteroids decreases markedly with size. Although this generally follows a power law, there are 'bumps' at 5 km and 100 km, where more asteroids than expected from a logarithmic distribution are found.

Who's to say there aren't other bumps or deviations at radii that we can't observationally confirm. Our confidence in any power law's applicability for small asteroids and comets basically comes from modelling.

This power law you're asking about is essentially something referred to as an "Initial Mass Function" (IMF). A lot of work has been done to define an IMF for stars, relating the mass of stars to the number of stars at that mass. This stellar IMF follows a power law more or less, but strongly deviates for very low masses. At the surface, it would be reasonable to assume an IMF for asteroids and comets likewise deviates.

The way you answer this, is through models. See for example Cuzzi, Hogan, and Bottke (2010) (that link is to the formal journal paper, but for some reason some plots are obscured so you can also look at their "unofficial" arxiv version). In this paper, the authors attempt to construct a representative asteroid/comet population by modeling their formation via accretion of protoplanetary dust grains into asteroids, comets, KBO, and planetesimals. They make certain assumptions about the initial gas disk around the Sun and bake in physics of how these dust grains formed into larger conglomerates. Their end goal is to produce an IMF that identifies how many asteroids/comets exist at a given size. They back up a lot of their modelling with data from observations so they stick to reality as much as possible.

I'll let you peruse their results since they actually produce many different IMFs using a variety of different assumptions and starting conditions. However, I think one can summarize their results in a way which addresses your main question. As they state it:

What they mean is that asteroids (and comets), rather than forming by successive growth via accretion of many small particles, seem to just clump together into larger bodies, completely bypassing the formation of many smaller meter-sized asteroids and comets (that's not to say there aren't meter-sized objects). You can actually see this in their various plots (fig. 4 for example). Much like the stellar IMF, the power law drastically changes once you get to small sizes and the power law which applied for larger sizes is no longer applicable. At which size the general power law no longer becomes applicable depends upon certain tunable parameters. Cuzzi et al. shows many different results with their tunable parameters set to many different possible values.

Not the answer you're looking for? Browse other questions tagged asteroids mass or ask your own question.

1
How young could the asteroid belt be?

4
Sum of the Masses of All Moons in the Solar System
7
Can the Gaia telescope detect small temporarily captured asteroids near its Lagrange orbit?
3
Orbiting and landing on non-sperical objects
1
Size and Mass of a typical “small” asteroid that impacts the Earth?
2
Data on the composition and orbits of asteroids
6
Are there any estimates for the combined mass of all near earth objects (NEOs)?
5
GW190521 black hole merger total mass calculation and missing mass, how does this happen?
10
How do we get to know the total mass of an atmosphere?