Which atom is a Neutron star made of?

I understood that everything was made of Atoms.

An atom is the smallest constituent unit of ordinary matter that has the properties of a chemical element. Every solid, liquid, gas, and plasma is composed of neutral or ionized atoms

However with Neutron Stars;

the basic models for these objects imply that neutron stars are composed almost entirely of neutrons, which are subatomic particles

Does this mean neutrons can exist outside of an atom, and that a Neutron star isn’t comprised of an element that is recognisable on the periodic table?

Yes neutrons can exist outside the atom (or nucleus). In free space a neutron will beta decay into a proton, and electron and an anti-neutrino on a timescale of 10 minutes. However, in the dense interiors of a neutron star, the electrons form a degenerate gas, with all possible energy levels filled up to something called the Fermi energy.

Once the Fermi energy of the electrons exceeds the maximum energy of any possible beta-decay electron, then beta decay is blocked and free neutrons become stable. This is what happens inside a neutron star and you end up with mostly neutrons with a small fraction perhaps a few per cent electrons and protons.

In the outer parts of the neutron star, the protons and neutrons can still arrange themselves into nuclei (but not atoms), but these nuclei are extremely neutron-rich (they would not normally exist in nature) and are only stabilised against beta decay by the process I described above. The very outer envelope may consist of completely ionised iron-peak element nuclei and there may be an ultrathin (few cm) layer of recognisable ionised hydrogen, helium and carbon (e.g. Wynn & Heinke 2009).

Once the density reaches about $3 \times 10^{16}$ kg/m$^3$ it becomes more favourable for the neutrons and protons to organise themselves into "macro-nuclei" - long strings and sheets of nuclear material, known colloquially as nuclear pasta.

At higher densities still, the pasta dissolves into a soup of mostly neutrons with about 1 per cent protons and electrons.

The diagram below (from Watanabe et al. 2012) shows roughly how these layers are arranged. It should be stressed that this is based on theoretical modelling, with the theory becoming less certain the further into the neutron star you go. Testing these ideas involves nuclear and particle experiments, observations of pulsars, of neutron star cooling, of X-ray bursts, mass and radius estimates in binary systems, pulsar glitches, etc., etc. None of the details have been observationally confirmed beyond dispute, but the basic picture below fits what we know. In particular, the the crust and the n,p,e fluid regions are well understood in theory. The details of the nuclear pasta phases are still the subject of a lot of theoretical work, as are the details of superfluidity in the interior, and what happens in the very central regions (solid neutron core, extra hadronic phases, boson condensation, quark matter) is still theoretically difficult and observationally untested except perhaps to say that the softest equations of state have been ruled out by the existence of $2M_{\odot}$ neutron stars. 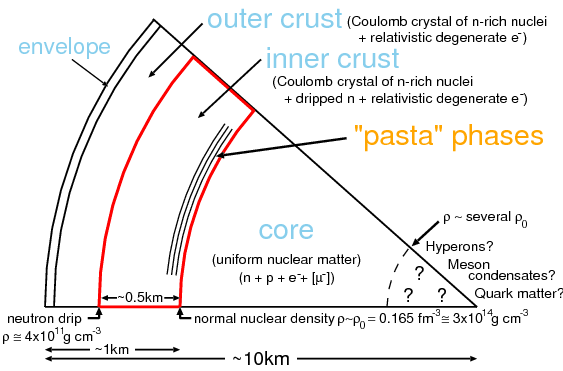 A more historical/linguistic than physical answer:

Democritus proposed that matter could not be divided infinitely, but that at some point one would reach a smallest possible piece, which he called atomos, for "uncut". He was entirely correct as far as we know.

Before 1930 or so, we modern humans mistakenly applied his word "atom" to what we then saw as the smallest piece of a chemical element that maintained its properties, because no one had ever subdivided one, and chemical processes behaved as if these were small indivisible particles.

After that kind of "atom" was split, we were stuck with the word. What Democritus called "atom" today we would call "quark or lepton", things that we think are fundamental and not splittable. But we could be wrong there too, if future physicists split these things.

All of the ordinary things in our lives--you, me, the Earth, your house, your food, etc., are made of "atoms" in the 1920 sense, interacting chemically, electrically, and gravitationally. Even the Sun is made of atoms, though in that case they're not quite unsplittable because they fuse and change into different kinds.

Certain rare and exotic things in the universe are not made of atoms in the 1920 sense, like neutron stars. Though they are made of small indivisible quarks and leptons; atoms in the Democritus sense.