Can Drizzle Integration increase resolution beyond theoretical resolution of telescope?

So I was wondering, if drizzle integration actually increases details in your image if the drizzled image results in higher resolution in terms of arcseconds / pixel than the telescope would allow (due to the uncertainty principle the telescope's resolving capability is dependent on its diameter, more commonly referred to as the diffraction limit 1, 2 )

In my case I have around 0.52" per px on my main camera and my GSO RC8" allows for around 0.5" resolution max due to the uncertainty principle. Drizzling an image would then give me 0.26" per px on the drizzled image when increasing width and height of the image by factor 2, which is higher resolving power than what the telescope would actually be able to do.

In your hypothetical case, 0.52-arcsec pixels are good enough for resolutions down to about 1 arcsec. Ideal drizzling would allow you to effectively have pixels that were about 0.25 arcsec in size, which would accommodate a resolution of about 0.5 arcsec. But you can never do better than the intrinsic resolution of your telescope + the atmosphere.

Drizzling is just one technique in the field of super resolution imaging. Note that claims that you can't "pass the resolution limit" of a camera are wrong, in principle. In practice, it's really hard. What limits your ability to construct an image of what the camera is looking at are: the amount of random noise in the pixels, and your understanding of the camera's point spread function (PSF) (though some astronomers prefer to use the term "point response function" [PRF] if you include the effects of both the optics and the detector). In principle, if you invest enough time and money to nail down the PSF and increase the signal to noise ratio without limit (beware of bias), the object you're imaging isn't changing, and you have enough accuracy in measuring how you point the camera when dithering, then, in principle, you can push the resolution of the reconstructed image as far as you want.

In practice, it's usually cheaper and more time efficient to just get a bigger camera.

For a concrete mathematical example of how image reconstruction works, consider the sum of two offset Gaussians, with $\sigma=1$, $\mu_1=-0.1$, and $\mu_2=+0.1$. Here's a graph of such a curve overplotted with a single Gaussian with the same $\sigma$, scaled to have the same height at $x=0$. You can only see one line plotted, though I assure you there are two. 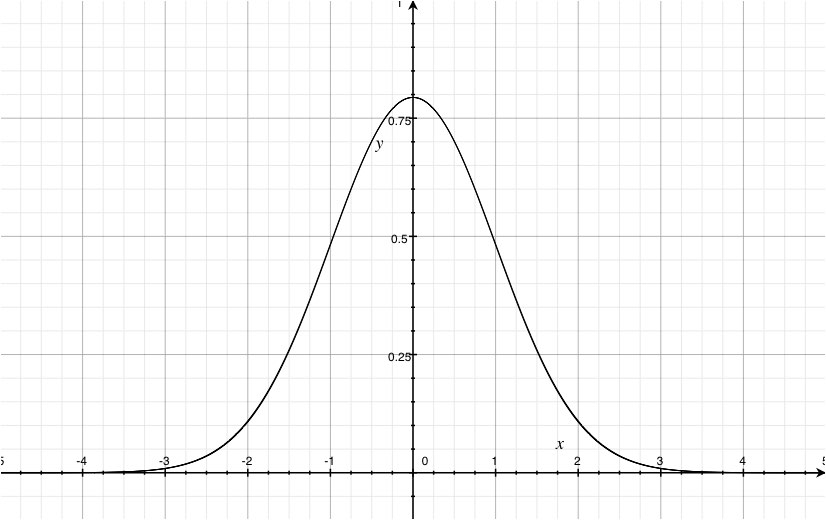 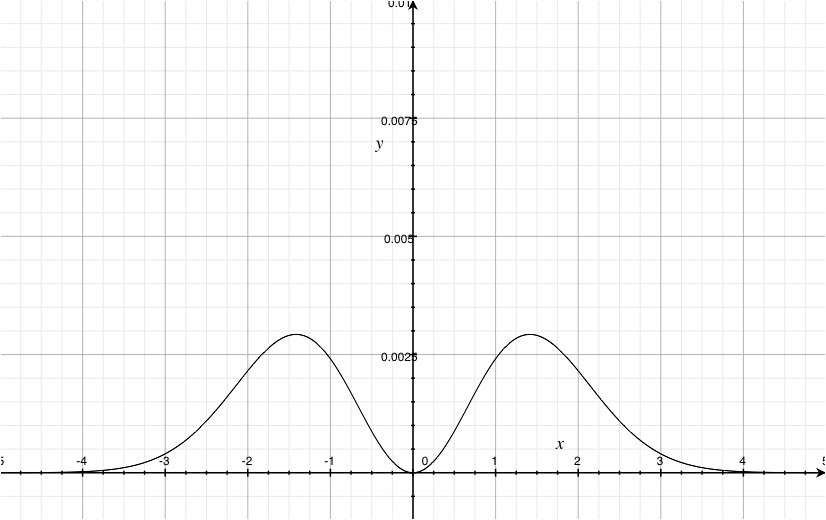 As you can see, the theoretical difference is not zero. So, if what you're imaging isn't changing, you can model the background accurately enough, and you have a sufficiently accurate model of the camera's PSF, you could detect the difference between the high Gaussian and two slightly offset Gaussians scenarios if you invest enough time and energy into the project, in principle, even if your pixels are twice the full-width at half maximum (FWHM) of the Gaussian. $\mathrm{FWHM} = \sqrt{8\ln(2)}\sigma$ for Gaussians, so in this graph twice the FWHM is about $4.7$.

One way to further the goal of understanding the PSF is to intentionally make it easy to model (as opposed to 'as small as possible'), as is done in many forms of non-redundant aperture mask imaging. I believe that the trade-off there is that you lose both field of view and the (obvious) loss of the light that gets blocked.

In practice, though, you're usually better off getting a bigger camera, or compensating for the atmosphere (e.g. lucky imaging and adaptive optics) if your imaging is seeing limited. Thus, the limits imposed by the Nyquist sampling theorem are more practical, not theoretical. It's also prone to mislead you if you don't remember that pixels are not points, they're little buckets that collect light that falls into a finite area. Talking about it "sampling" some function, implicitly uses the mean value theorem to say that the amount of light collected divided by the pixel's area gives the value of the image's brightness there. What's often dropped is the caveat that it's the brightness somewhere inside the pixel, not necessarily at the pixel's center. This is usually a very small effect, which is why it's often ignored, but when you're talking about working at the resolution limit and having pixel sizes comparable to that resolution, the distinction may become important. Roughly speaking, if the PSF is highly curved within the pixel, the offset from pixel center of the mean value can become significant.

One way to think about what drizzle gets you is that by moving the pixels between images, you move around the light buckets. In principle, with enough images at different offsets you can probably push the pixel density of the image to the limit of your ability to reconstruct the size of the offsets (usually the pointing of the camera/telescope, though I know of no reason why the sensor couldn't be moved around on some stepper motors attached to micrometers), or the sharpness of the divides between the pixels (the ability to gather light is neither uniform over a pixel, nor could the pixels fill the detector from edge to edge completely, these are just really good approximations most of the time).

Not the answer you're looking for? Browse other questions tagged photography angular-resolution rc-telescope drizzle post-processing or ask your own question.