What is this rapidly twinkling red, blue, and white star I saw?

Last night, I was on my balcony at 1AM (PST) and I looked up and saw two stars near the horizon (I'd guess ~30 degrees above the horizon), and they were "twinkling" about twice as fast as other stars higher in the sky, and I could clearly see them changing from red to white to blue repeatedly. Other stars in the sky only appeared white to me, and didn't seem to "twinkle" as rapidly as these two stars did. The red and blue make me think of red-shift and blue-shift, but I don't know how I would see both from the same object.

What was I seeing?

I don't know if it helps, but I am in the Los Angeles area, and I was looking almost exactly to the east, according to google maps.

Edit: I tried taking a picture, but light pollution from the nearby street lights wouldn't permit me taking a decent picture. However, I noticed a group of three stars close together in nearly a perfect almost vertical line, and managed to find that in Stellarium. I think I found the two stars I am seeing: Procyon and Sirius 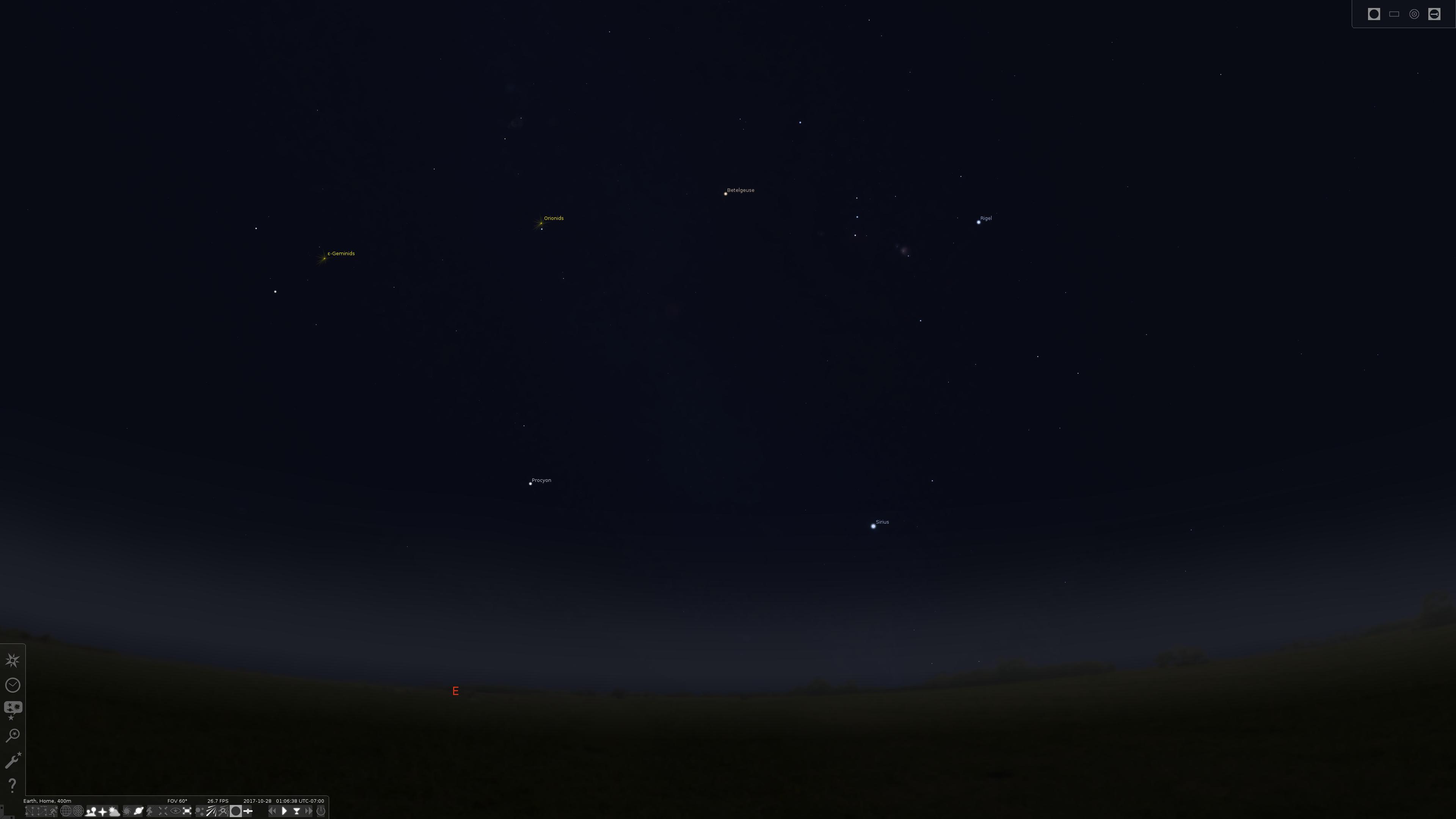 Is there anything about either of these stars that would make them show as red/blue?

It's most probably Sirius. At this time of year (at 1 am local time) it's low in the sky in the East, so there is a lot of atmosphere in the way, and as Sirius is a bright bluish star, it will show all the colours described as it twinkles.

As you have already identified the objects you were seeing, I'll explain the effect you were seeing. In that situation there are three things to consider: atmospheric chromatic dispersion, seeing and human color perception.

Light entering the atmosphere is refracted, because of the changing speed of light in air compared to the vacuum of space. The amount of refraction depends on the wavelength, causing optical dispersion. This effect is strongest for objects appearing near the horizon. Basically the different color components of the star's image appear at slightly different elevations in the sky (nice in-depth explanation).

Turbulence in the atmosphere causes the "twinkling" or seeing. Moving pockets of hotter and colder air act like lenses that are projecting the star's light into varying directions, so a varying amount of light reaches your eye. Together with the dispersion this produces a colorful twinkling.

Because the color perception in the human eye doesn't work in faint light, this colorful twinkling is observed for the brightest stars only.

The doppler shift is not the reason for the red and blue colors. At a typical velocity dispersion of 30km/s of our surrounding stars, the doppler shift changes the wavelength by an imperceptible 10-4 fraction. Also this would have to change extremely rapidly, which simply does not occur for our average night-sky stars or most other objects, for that matter :-)

Capella is quite a striking star because it's actually four stars. There are two sets of binary pairs that are almost exactly along the same line of sight such that the light from the four stars together co-mingles and from Earth looks like a single star. Interestingly, the different stars have different colors, meaning that as you stare at it, it can appear white, red, or blue, just as you described. Note that the human eye cannot observe redshift and blueshift like you describe.

The fact that the star twinkled more than those higher up is due to the atmosphere itself. The closer to the horizon a star is, the more it will twinkle due to the starlight passing through more atmosphere before reaching you.

They are not stars I’m from Prince Edward Island Canada those red blue and white looking disco balls in the sky are something the police or military are using. Look on U tube thier are people all over the world seeing the same thing . If u watch those for long enough they will drop every 3 hours approximately. And in most cases especially mine thier is heavy drone activity when these are present. I have really good footage of a lot of this stuff as I bought good camera equipment to gather evidence. If u have these near your house it’s not a good thing as your privacy is being affected from the law or military.

Not the answer you're looking for? Browse other questions tagged star night-sky .

0
What object could I have seen at late June on the Sky?
5
South-eastern sky above the tree line just now, NE Cape Cod, I saw a very bright, twinkling "star"
9
What's the white glow around this star?
3
Lifespan of B-type subdwarfs
8
The colour of blue dwarf stars