Could asteroid 'Oumuamua actually be round?

News articles have mentioned that the recently discovered asteroid 'Oumuamua is theorized to be greatly elongated based on observations of brightness variation. However, this hypothesis seems to be based on the assumption that the object's albedo distribution is reasonably uniform. What if it isn't? Could large periodic brightness variations also be explained by 'Oomuamua having two highly contrasting hemispheres like Iapetus? If the astronomers involved have already eliminated this competing explanation, how would they have done so and with what additional observational data?

The hypothesis that the object has an extreme aspect ratio comes from both the max/min ratio of the light curve and the shape of the light curve, along with some assumptions of the uniformity of the albedo as you mentioned.

If you read the BBC article Bizarre shape of interstellar asteroid and click from that page on the link that says which is published in Nature journal. it will take you to an open access draft of the Nature Letter. In it you can see the shape of the light curve. I've chopped up some sections to show below.

This is what you would get when a high-aspect ratio objects so that is viewed end-on. A black spot would darken the curve much more gradually, being viewed for a longer fraction of the cycle.

This is not proof of the high-aspect ratio hypothesis, and the authors don't claim this. However, it's the best way to fit the curve with the fewest assumptions, as far as I can tell. 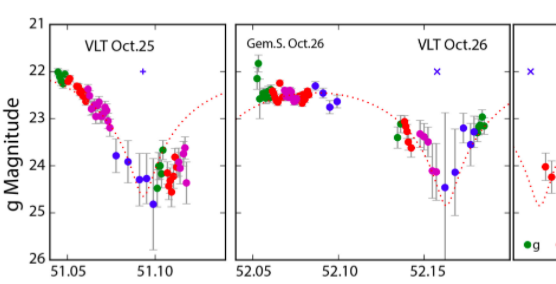 4
If we've only observed Oumuamua as a single pixel, how can we know its shape?