Could we detect if Oumuamua asteroid wasn't an asteroid?

Disclaimer: I do NOT suggest that Oumuamua is in fact an alien spacecraft, a giant coffin, or a statue of Weird Al.

Since it apparently has a very unusual shape, if this is something else, with a different material (neither rock nor ice), could we detect that something is unusual?

I think its a good question and has probably popped up in the back of many people's minds for milliseconds, both astronomers and lay people, though most of them would still be hesitant to admit it on an internet forum. And of course, our understanding of what is possible or even "normal" in the universe is vanishingly small.

From the NPR news item Astronomers Want To Know: Does This Interstellar Visitor Have A Message For Us?:

"Researchers working on long-distance space transportation have previously suggested that a cigar or needle shape is the most likely architecture for an interstellar spacecraft, since this would minimize friction and damage from interstellar gas and dust," the group said in its announcement.

"While a natural origin is more likely, there is currently no consensus on what that origin might have been, and Breakthrough Listen is well positioned to explore the possibility that 'Oumuamua could be an artifact."

"The possibility that this object is, in fact, an artificial object — that it is a spaceship, essentially — is a remote possibility," Andrew Siemion, a member of the initiative and director of Berkeley's Search for Extraterrestrial Intelligence Research Center, told The Washington Post on Monday.

"We don't want to be sensational in any way, and we are very realistic about the chances this is artificial," Yuri Milner, the Russian billionaire financing the project, told the Scientific American, "but because this is a unique situation we think mankind can afford 10 hours of observing time using the best equipment on the planet to check a low-probability hypothesis."

And they'll be checking on that hypothesis by scanning the object for possible artificial transmitters through a radio telescope at West Virginia's Green Bank Observatory.

edit 1: A few days after you've asked the question, a similar thought was uttered by the BBC correspondent Roland Pease in the Science in Action episode Interstellar Asteroid. Talking with astronomer Alan Fitzsimmons of Queens University, Belfast (who's image of X was featured in a NASA "Astronomy Picture of the Day"), Pease says:

You say ‘cigar-shaped”, that’s to me “rocket-shaped”. Is there any way you would know that this is an interstellar rocket?

The asteroid was discovered and has been observed mostly (if not completely) by it's reflection of radiation from the Sun. The Sun is roughly a blackbody emitter and most of the radiation is in the visible. Because of the dimness of the light even at maximum, there isn't much signal once dispersed spectroscopically.

There is a spectrum published in ArXiv Palomar Optical Spectrum of Hyperbolic Near-Earth Object A/2017 U1 on 2-Nov-2017 by Joseph R. Masiero though! Despite the low light level (V ~ +21) and expanded size due to poor seeing at low elevation resulting in a signal-to-noise ratio of order unity, the 5 meter Hale telescope (200 inch Mt. Palomar) was used to try to obtain some spectroscopic information. Ten 300-second runs (total of 50 minutes of collection) were used to produce the heavily binned spectrum below. I think those are 1-sigma error bars, so the spectrum doesn't say much more than "slightly red-ish". 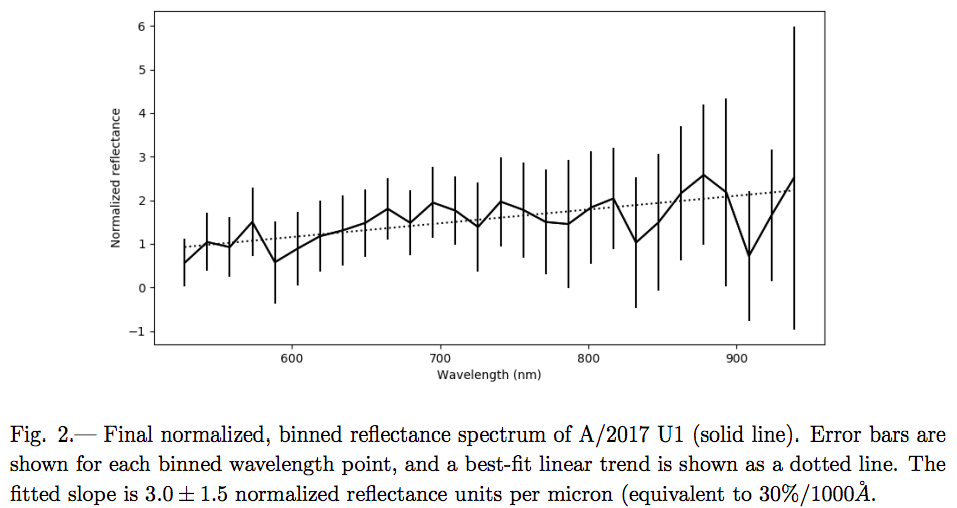 See also Ye et al. 1I/2017 U1 (`Oumuamua) is Hot: Imaging, Spectroscopy and Search of Meteor Activity for further background:

The moderate spectral gradient of ‘Oumuamua indicates that its surface is devoid of ultrared material that is common on outer solar system objects like KBOs. Various classes of KBOs are typically very red in color, with a spectral gradient $\gtrsim (\text{100 nm})^{-1}$, likely due to the irradiation of organic material resulting from the bombardment of energetic particles (Brunetto et al. 2006). The less reddish color of ‘Oumuamua suggests that the object was either formed close to its original central star, or has lost its ultrared material due to close approach(es) to its original or other stars. It is difficult to say which scenario is more likely due to the chaotic nature of small body dynamics.

According to Sky and Telescope's Update on `Oumuamua, Our First Interstellar Object:

The object had already dimmed to 20th magnitude by the time the Pan-STARRS 1 telescope swept it up, so observers worldwide had to scramble to get major facilities to gather more observations before the one-of-a-kind interloper becomes impossibly faint.

One lucky break came immediately after the MPC's initial announcement. Observer Joe Masiero (Jet Propulsion Laboratory) just happened be in the middle of a run with the 5-m Hale Telescope at Palomar Observatory, and he quickly obtained a spectrum that's reproduced below and explained in more detail here. There's no obvious absorption that would signify the presence of particular compounds or minerals.

But the gentle slope, increasing toward the red (right) end, suggests that `Oumuamua is not a particularly good match to objects in the Kuiper Belt (which tend to be much redder). Instead, it's the kind of spectrum that a rocky surface would exhibit after being "weathered" by long-term exposure to space radiation.

So I'd say that the answer to your question is "No", there's very little besides its orbit and light curve and approximate color that has been or probably could have been detected. With more warning, and serious interest, it's possible an observation campaign could have been organized to get more aperture area and time to make a better spectrum, but since S/N only scales as the square root of those, a lot of other observations would have had to have been rescheduled to make it happen.

Not the answer you're looking for? Browse other questions tagged asteroids .

4
Could an asteroid impact cause radioactive fallout?
1
Could asteroid mining affect gravitational balance?
4
Potential formation mechanisms of the interstellar asteroid 'Oumuamua
10
Could asteroid 'Oumuamua actually be round?
6
Did interstellar asteroid Oumuamua pass near other stars?
4
Simple mathematical models of solar systems
0
Could there be a M-type asteroid beyond Jupiter?
28
How early could we detect an asteroid the size of the one that caused the extinction of the dinosaurs?
18
Where on Earth could dinosaurs feel the impact of their extinction asteroid?