Do comets have a limited number of orbits? [closed]

Do comets have a limited number of orbits?

Everything in the universe has a limited number of orbits. But the way to make sense of your question is to ask how long comets last. Comets lose ice when they fly past the sun, so they get smaller each time. How much smaller depends on how close they get to the sun and their composition, or how easily they "melt" or break apart. (Ice doesn't exactly melt in space, it sublimates when it heats up)

Sungrazers have a very limited number of orbits. Halley's also is expected to have a limited lifespan of about 100 more orbits before it stops being a comet and basically becomes a rocky body. Halley's passes closer to the sun than Venus at its perihelion, so it loses a lot of ice, each pass, which helps make it's tail impressive. (when Earth and Halley's are properly aligned that is).

Orbiting objects that cross planetary orbits are also, on average, less stable, but I suspect that's another subject. Halley's might be destined to crash into the Earth, or the Moon at some point. It's orbit nearly intersects the Earth's orbit in two places. But don't worry. That's not going to happen anytime soon, if it happens at all. 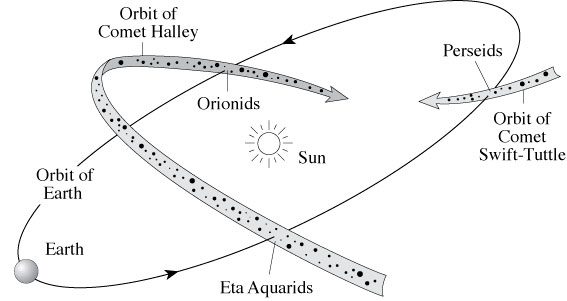 4
How would a planetary defence against comets work?
6
What known comets are binary?
9
Could the trajectories of non-periodic comets be used to infer properties of the 'ninth planet'?
14
Why do comets appear to have a continuous supply of dust?
8
How big do comets get?
5
Do comet orbits lie in the same plane as the other planets?
5
Why the comets can cross the orbits of planets?
3
extrasolar comets - basic question
9
How do comets' nuclei stick together?