Why is the difference between Apollo and Aten asteroids considered meaningful?

I understand the difference between the two to be that they both cross Earth's orbit, but Atens have an orbit smaller than Earth's, and Apollo have an orbit larger, but I don't understand why they aren't simply lumped together in one category.

The first point to make is that categorization isn't an exact science. It's done for convenience and practicality and sometimes, familiarity. It's not going to be perfect.

The second point to make is that scientists like categorizing things. Take the Taxonomic ranking of living creatures. Everything from a paramecium to an elephant has a species, a genus, a family, an order, a class, a phylum, a kingdom and a domain. Categories are everywhere in science and they're useful. Taxonomy classifications aren't perfect, but classifications don't need to be perfect to be useful and provide distinction and quick and familiar identification. The same is true for asteroid classification.

Both Atens and Apollos are already lumped into one category called Earth-crossing asteroids, so, when needed, they can be discussed together. It's more common to separate them by the two types, but it's not required.

Earth-crossing asteroids or Earth-Crossers are a sub-category of Near Earth Objects, and Near Earth Objects or NEOs are of particular interest because every so often, an undesirably large object hits the Earth.

NEOs can be divided into Atens, Apollos, Amors, Comets, and Atiras, sometimes called Internal Earth Objects or IEOs, but there are relatively few Atiras and they're sometimes included with the Atens, though technically, Interior Earth Objects aren't Atens if their aphelion is too far inside the Earth's orbit.

NEOs can be classified as potentially hazardous (PHOs) if they are over 140 meters across, per Wikipedia (NASA gives a different definition of PHOs below - so take that definition with a grain of salt).

Because of the infrequent but "could happen at any time" impact possibility, a well funded effort is underway to catalog, track and calculate the trajectory of every NEO larger than 100 meters, called the Near Earth Object Project. Because so much attention is given to NEOs, the distinction and naming of Atens and Apollos makes perfect sense to me and doesn't seem unreasonable at all, but as pointed out above, there aren't any clear-cut rules when it comes to categorization.

What's most relevant to the NEO project, in addition to size is Minimum Orbit intersection distance or MOID. PHO's by the NASA article, as opposed to Wikipedia, are categorized by Earth-MOID of less than 0.05 AU and an absolute magnitude (which is related to surface area, which is related to size) of 22 or brighter.

Not all crossing asteroids (determined by aphelion and perihelion) have orbits that come close. Because orbits take place in 3 dimensions, orbits can be crossing, but never get close. Pluto, for example, is a Neptune-crosser but the orbits never get close.

I added MOID cause I thought it was interesting, but back to categorization.

The other 7 planets have their own versions of Atens and Apollos, called inner and outer grazers. See Jupiter crossing objects.

There's also resonance objects (Jupiter's Hildas, Neptunes Plutinos). Objects can also be defined by outer orbits (Trans) or inner orbits (Cis), and by prograde or retrograde, which isn't the same that planets appear to do, but orbits relative to the sun can move opposite to the 7 planets. In the inner solar-system, there are very few retrograde orbiting objects but out beyond the 8 known planets, retrograde is more common.

There's other categories include Centaurs, Scattered Disk Objects, Oort Cloud Objects and, of-course, Asteroid belt objects and lets not forget comets, which are distinct from Asteroids, though the distinction gets a little fuzzy for dead comets.

Another categorization example, Jupiter has so many trojans, that it's two camps are separated into Greeks and Trojans, which is odd, because Jupiter's Trojan camp is a subset of Jupiter's Trojan asteroids. That's a naming system that stuck, but which I think is less than ideal. You can also call them L4 Trojans (Greek camp) or leading the planet's orbit and L5 Trojans (Trojan camp), following the planet's orbit.

The overall point is that there's many of categories of asteroids. Atens and Apollos seem to me, fine and relevant, not arbitrary. (want an arbitrary definition, how about when a moon-planet system becomes a duel planet system - that's pretty darn arbitrary). Many definitions are arbitrary.

Asteroids can be classified in different ways. One way is on their spectral type, which relates their composition. Another way is to classify according to their orbit.

Of these various classes the Earth-crossing asteroids are of particular interest. There are those with an orbit that takes less than one year (Atens) and those that take more than one year (Apollos). There is no great difference, just a way of ordering the list of known asteroids.

There are four classes of asteroid in this Near-Earth Orbit taxonomy. 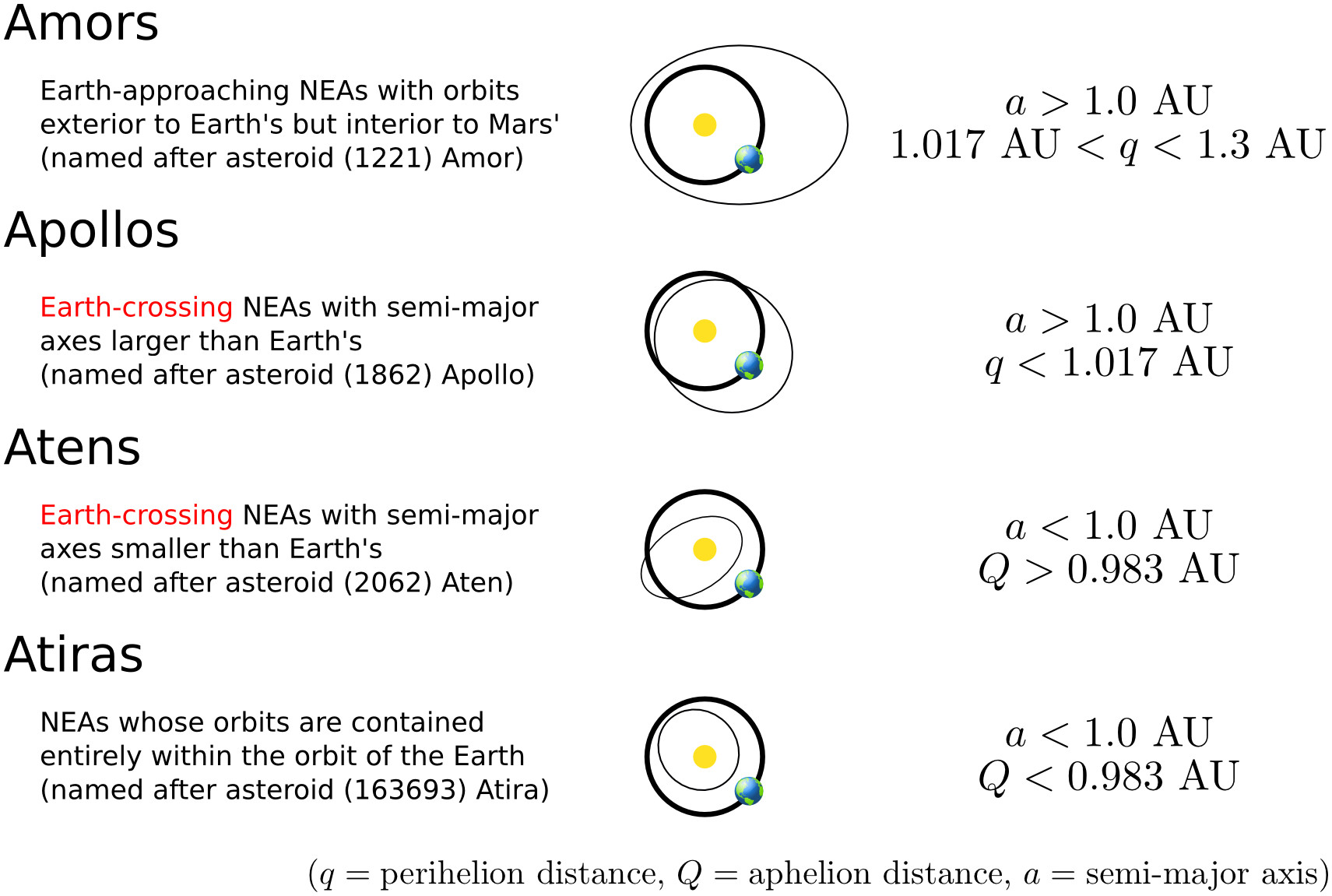 Why Apollos and Atens are separate classes is that Apollos aphelion distance is not restricted. Apollos cross Earth's orbit but can come from far away - the Main Belt, for example - so they could have a quite large semimajor axis. Most of the time they are farther from the Sun than Earth is.

On the other hand, Atens have a small orbit - smaller than Earth's but they cross Earth's orbit. So most of the time they are closer to the Sun than Earth is.

Not the answer you're looking for? Browse other questions tagged asteroids near-earth-object .

18
What is the difference between asteroids, comets and meteors?
2
Is the Dwarf Planet class really necessary?
3
Orbiting and landing on non-sperical objects
3
What effect does the Moon have on the near Earth asteroid population?
2
What (actually) defines an Aten-class near-earth asteroid?
0
Intercept a NEO trajectory
5
Is there a distinction between NEOs and near-Earth asteroids? Is there a difference?
2
Retrogradation movement of planet Mars relatively from Earth by Copernic
5
Why do we only have one major meteor shower from 3200 Phaethon?
1
When thermal infrared space telescopes spot asteroids, are they seeing the body's own thermal emission, or reflected TIR from the Sun?