Will we be able to see our galaxy if we travel far enough?

Do we have to travel really far to see our galaxy like a dot? or just far enough to realize the size and shape of our galaxy?

In theory, yes; in practice probably not ...

i) It's perhaps helpful to take the Andromeda galaxy as a first working example. It is somewhat bigger than our own Milky Way galaxy but not so big as to be a problem.

When we look at Andromeda, it appears to occupies an area about 3 degrees by 1 degree. By comparison, the Moon appear about 0.5 degree across. Andromeda is a good target to see, a little faint but it is just about visible with the naked eye on a good night.

Andromeda is about 2.5 million light years away so, even travelling at the speed of light, it would take 2.5 million years to get far away enough from the Milky Way so we could look back and see our galaxy like we see Andromeda today.

( In Star Trek, the writers seemed broadly to limit themselves to adventures within our galaxy for the same reason: within the realms of sci-fi, perhaps they could justify getting around the Milky Way within a reasonable period of time - not so to travel between the galaxies )

ii) To reduce the apparent size of our galaxy to a dot would require travelling at least 10x further or probably more - depending on how you are observing. 50 million light years, anyone?

Yes you can but it depends partly on the direction you travel relative to the galactic plane and the strength of your telescope. As you might guess, if we moved away along the galactic plane from our current position, we may see our galaxy looking like this: 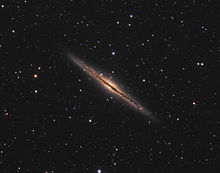 It would be very hard to actually discern the shape from this view. If you move from the present location perpendicular to the galactic plane, you may, after many millions of light years, get a view closer to this: 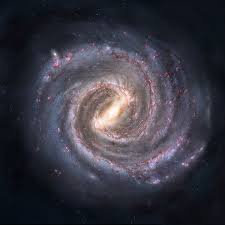 Much easier to tell the shape of a galaxy.

Theoretically it is completely feasible. In practice...just don't. In order to get there in a few thousand years, you would have to travel well beyond the speed of light (which is impossible if you didn't know). Once you got to a point where the entire galacy was within your vision, the entire galaxy would look distorted, since our galaxy is 100,000 light years accross, the light from the edges of the Galaxy would be thousands of years old, and would not match up with how the spiral should appear. If you were able to look at the earth through the most powerful telescope ever created, you would see things as they were well before you left (that is assuming you did travel faster than the speed if light to get to the point where you currently are).

Not the answer you're looking for? Browse other questions tagged galaxy light naked-eye or ask your own question.

16
How distorted will our galaxy be if we are viewing it from several thousand light years away?

75
Is the moon only 60 pixels?
2
How much of the Milky Way is visible to the naked eye from earth?
3
Does the Sun's light travel fast enough to have a straight path to Earth?
5
How clearly would I be able to see a galaxy with the naked eye if viewed from a “close” distance?
1
Seconds of Arc and the Unaided Eye
3
Would I actually be able to see Ceres without shining a really bright torch onto it?
7
Why don't we see more supernovae in our galaxy?
1
Do far away planets reflect light in the same way our moon/earth reflects light?
4
What would stargazing be like at the edge of our galaxy?