When would Oumuamua have entered the solar system?

So from what I've read, Oumuamua travels at around 26km/s when in interstellar space.

I also remember reading a while back that Voyager was travelling at around 18km/s when leaving the solar system.

Seeing as Voyager took around 35 years (I think) to exit the solar system, I'd guess that Oumuamua entered our solar system around 20–25 years or so ago?

One problem with answering this question is that it's not precisely clear where the solar-system ends or when (if) Voyager I crossed that border.

If we set the estimate at 19 billion km (per article) or 127 AU. (about 4 times the distance between Neptune and the Sun), then an estimate is possible.

Some conversions first. Voyager left earth in 1977 and the announcement was in 2013, so it's usually listed as 36 years (it might be 35 and some months) but that's not all that relevant.

18 km/s x 31.5 million seconds in a year (close enough) is 567 million km per year. It should have taken Voyager about 33.5 years at that velocity to reach 19 billion km. However, Voyager's velocity wasn't consistent. As it flies from the sun it slows down and it had several gravity assists along the way which sped it up and changed it's direction. Mathematical calculations get a little tricky, but here's a chart of Voyager's velocity.

Here's it's direction, more of a fish-hook shaped path than a straight line, though it's been mostly straight since Saturn which is over 90% of it's journey. 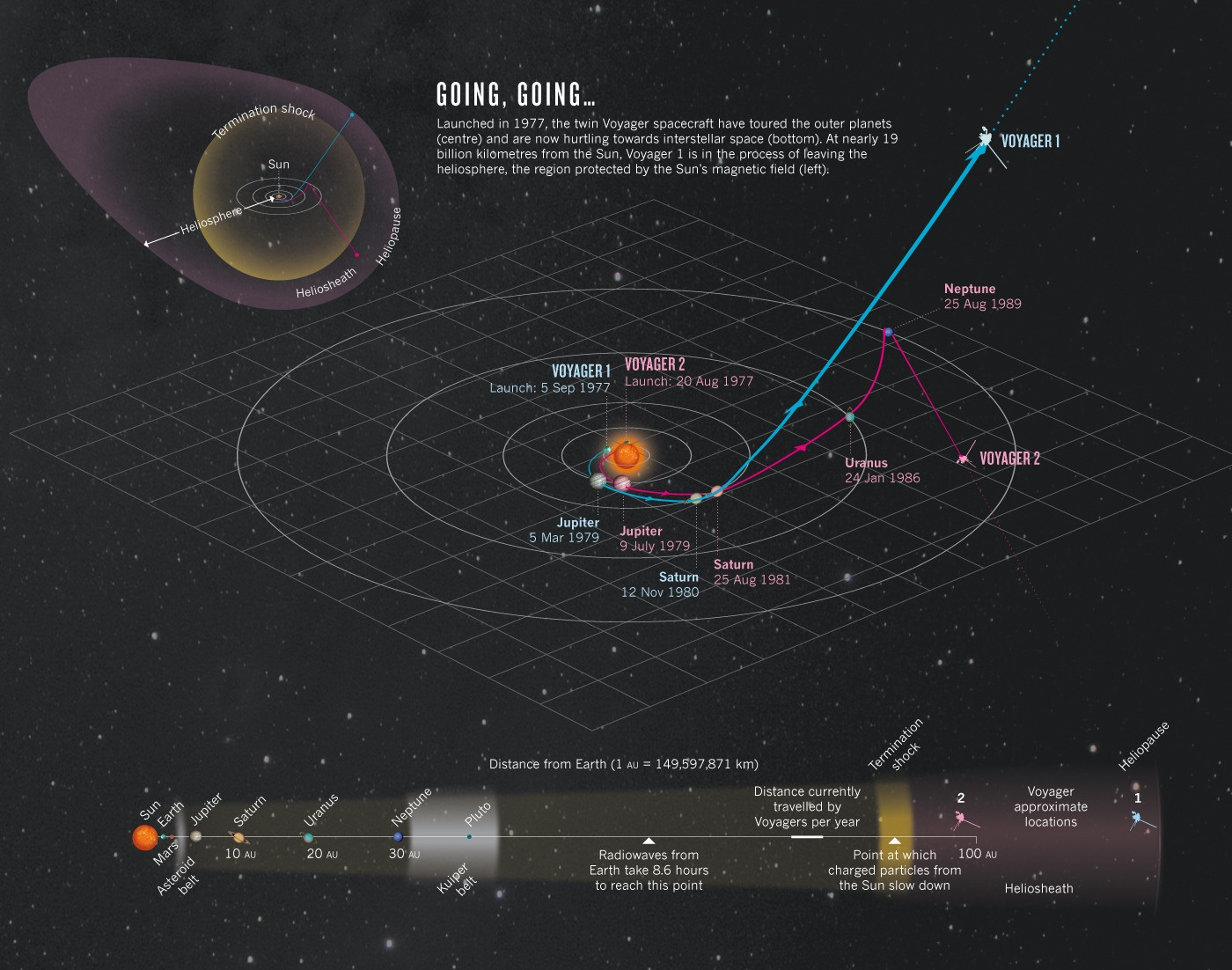 Oumuamua's velocity at infinity, as it approached our solar-system was 26.33 km/s. It speeds up as it approaches the sun and it will slow down as it leaves. When it passed the 19 billion km "border", you have to add the escape velocity from our sun at that distance, which is about 3.7 km/s, so it entered the solar-system traveling at (close enough) 31 km/s or 976 million km/year. At that velocity it would take 19.5 years to reach the sun (granted it will miss the sun), and in theory another 19.5 years to leave the solar system. But that estimate doesn't take into account that it speeds up as it gets close to the sun, so it takes less time. 17-18 years (ballpark) might be a good estimate. That's 17 (or so) years traveling in, another 17 (or so) to travel back out and reach the made-up border.

Unlike Voyager, nearly all of Oumuamua's journey is nearly straight, except for a quick curve around the sun. That makes it's journey close to "V" shaped when viewed from a distance. (I only mention that in relation to Voyager's more curvy fish-hook flight path, which was by design to pass by several planets). 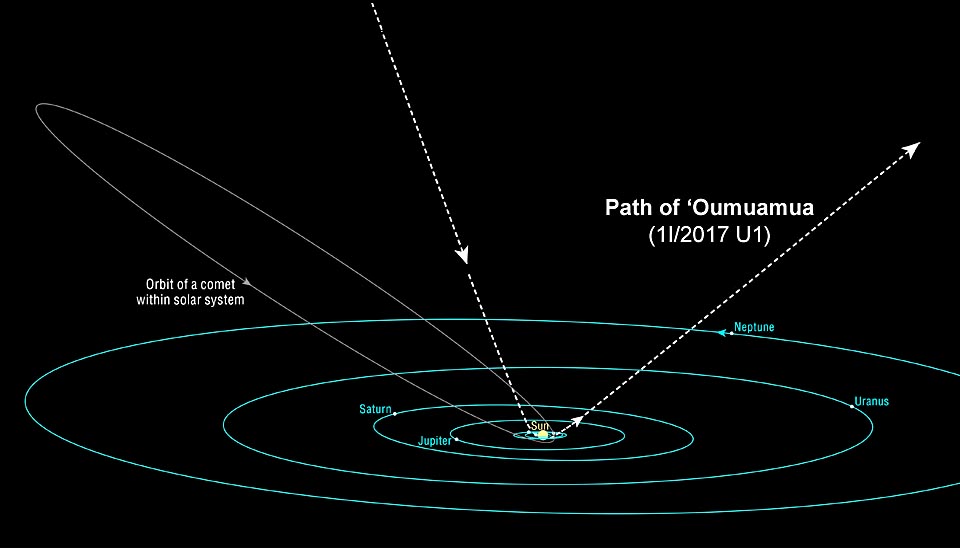 There's probably someone here who can do the math (I'd prefer not to), and they can work out a more precise answer of when it entered the fuzzy 19 billion km border, when it will reach it's perihelion or closest to the sun, and when it will pass outside that border again.

I like the "science" answer posted by userLTK. Here I'll cheat and use a projection from the current ephemeris in JPL Horizons. Set up like this:

and using the script below to plot the results, I get the years 1995 and 2039 for the times that the comet passes 127 AU. That's about +/- 22 years from perihelion, nicely confirming userLTK's ballpark estimate. Outstanding is the question of the direction of the comet relative to any possible "tail" of the heliopause opposite the direction of the Sun. I think there is no hard, observational information about this currently, so sticking with an estimate of a radius seems acceptable. 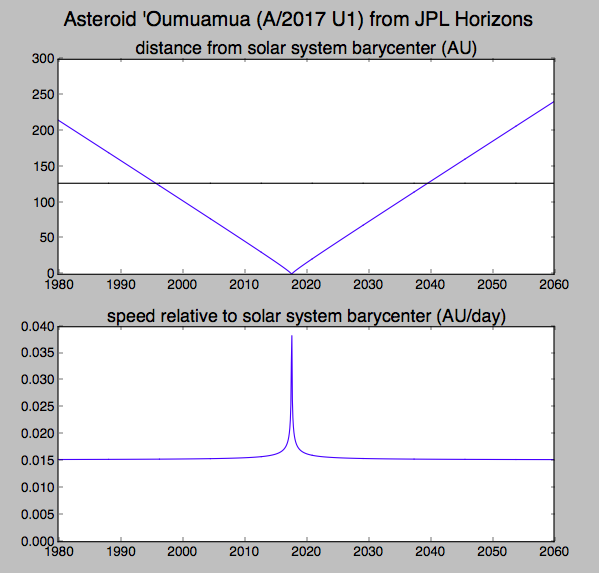 According to the current ephemeris' header:

Not the answer you're looking for? Browse other questions tagged solar-system asteroids speed interstellar oumuamua or ask your own question.

42
Where does the Solar System end?

7
Was there ever a hypothesis about a planet called Biga?
5
Potential formation mechanisms of the interstellar asteroid 'Oumuamua
5
Did interstellar asteroid Oumuamua pass near other stars?
2
How significant are the recent results that Scholz’s Star has perturbed several observed hyperbolic objects?
4
How did astronomers determine the path of 'Oumuamua so quickly?
1
What could be the name of a huge asteroid I watched some years ago?
5
What is the upper bound of number of stable interacting stars in a star system?