Can we measure comets in a similar way to exoplanets?

A 2km comet at 40AU's can dim a sun sized star at 100 light years by 3%, and a 10km comet can cause an eclipse (is that right?) So would 2,3,10 km objects be easy to measure via star dimming if we had enough telescopic data from space?

Can we measure lines of stars that are eclipsed/dimmed in sequence by transiting comets?

Given 1000 frames of a small patch of space, where all the images are recorded into a 3D image stack (a 3D array, a voxel) X,Y and Time as dimensions, then an Intel processor can compare 20 million voxels per second of that collection of images to search for vector information of aligned patterns of star dimming, i.e. searching for vectors of comets.

If that process is repeated for many patches of space, perhaps we can detect many comets, and I don't know the real maths involved, if a satellite of that design would realistically only find 1 comet, or 5000?

It's for a theoretical comet apprehension system which uses 2/3 identical satellites each comprised 100Tb of SSD and a 20Mflops processors to search for vector information in the images.

Some kind of fairy idea going around in my head, because of Oumuamua and because I work on voxels and I know that image collections from space can be stacked into 3D arrays and be searched for vector patterns at 2million voxels per second on a 200W PC, an idea that I am confusedly astrally-projecting as a basis to find comets.

edit- A quantitative answer would be cool, say if the voids between stars on the milky way arm are 8 times the width of the comet, the comet would on average hit 2 stars every 8x8 frames.

The thing about detecting exoplanets by eclipses is that the eclipses are repeatable. You have the same star, whose light curve dims in the same way with each eclipse, which gives you information about the planet's orbital period and its apparent size relative to the star. The Kepler mission observed many fluctuations in stellar brightness that were not associated with exoplanets, but instead with changes in the instrument, fluctuations in the actual brightness of the star, probably some other explanations that I can't think of off the top of my head, and actual mysteries.

Basically, if you can only observe it once, then you can't claim to explain it.

Occultations of distant stars by planets or comets don't give you a light curve: the star goes from "on" to "off". So a single occultation doesn't give you any information about the size, speed, or direction of the object doing the occulting. And the occultations are sufficiently rare that I think you'd be extremely unlikely to find a "line" of them by chance --- though that would make a fun data-mining project for an astronomy student.

What you can do, if you have an object that you already know about, is to make many observations of the same occulatation. That's the mission of the International Occultation Timing Association. If you click through to their web page you'll see this image: 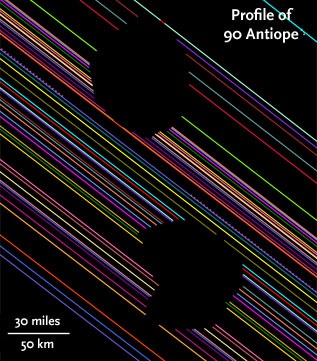 Each line here shows the observed brightness of a particular star observed from a particular location at the same time. You can see clearly that some observers saw the star disappear very briefly, some for longer, and some (who might have been predicted to be in the very center of the path) saw no occultation at all. Assembling all these individual observations, properly synchronized, shows clearly the shadows of the two parts of a binary asteroid, each of order 50 km in diameter.

Note that 90 Antiope is a main-belt asteroid. The angular diameter decreases linearly as the distance increases, so an object the same physical size orbiting out by Neptune (perhaps fifteen times farther) would need fifteen times the density of observing locations to create an image with the same detail.

You should consider how fast a comet at 40 AU would move past a star. The visible arc of a sun sized star at 100 light years is about the same as a 9 km object at 40 AU. Objects at 40 AU orbit at about 4.7 km/s, so that would be a 2 second eclipse, if perfectly lined up, and more often than not it would be partially lined up, for even less time. A 2 second shift in brightness might be too short to get a good measurement on.

Related to your question, rogue planets are being surveyed by shading and/or by movement of the background star by gravitational lensing, but those partial shading or lensing require much larger, more massive objects and from our perspective, moving much slower across the sky. See Optical Gravitational Lensing Experiment or OGLE survey.

The 2 seconds of shading that a 40 AU object would give you in your scenario (or, for example, a 20 seconds of shading from a 4,000 AU object) would be more difficult to accurately identify. Mercury, for example, takes 8 hours to travel a distance equivalent to the diameter of the sun. 8 hours of temporary eclipse offers much more easily track-able data, especially given that it repeats on regular intervals every orbit.

Not the answer you're looking for? Browse other questions tagged telescope exoplanet comets apparent-magnitude oort-cloud or ask your own question.

10
Can two comets travel together as one?
7
Is it accurate to compare comets to clouds and rain?
2
If sun steals comets from other stars, then what is the primary source of comets?
5
Why does Kepler's "Big Picture" of comet 67P look so strange? And what is the significance?
13
Why would the Perseids meteor rate fall off after maximum faster than the increase before maximum?
5
What is the closest an asteroid or comet has passed the Sun and survived?