Do heavier elements breakdown during supernova?

supernova nebula star-formation
Share
Improve this question
asked May 10 '14 at 10:05

The answer is that in a pre-supernova star, most of its mass is still in the form of hydrogen and helium. It is only the central core where the primordial H and He has fused to heavier elements.

This picture of onion layers is typically what you see in elementary text books. It is completely misleading in a quantitative sense. It schematically represents what's at the centre of the pre-supernova star, but in terms of the mass that is in each shell (it is obviously a 3d object) you get completely the wrong idea, because this diagram is only about 1 Earth diameter across, compared with the actual stellar radius of something like the distance between the Earth and the Sun!

Here is a more sophisticated plot taken from a paper by Fuller et al. (2015). It shows time until the supernova along the x-axis and the y-axis represents a radial assay of the chemical composition from the centre of the star to the outside. The initial total stellar mass is $12M_{\odot}$. As you move leftwards towards the supernova explosion, notice how what is at the core changes - from being H dominated, to He dominated, to C/O dominated then Si and finally Fe (actually iron-peak elements). Note how much mass is contained within these core region for each stage of nuclear burning. The edge of the "helium core" encloses the central $4M_{\odot}$ of the star. The subsequent heavier element cores inside the onion ring structure enclose significantly less mass, until the iron core is around $1.3M_{\odot}$ just prior to the explosion. Blue shading indicates regions that are thoroughly mixed and homogenised by convection.

After the explosion, the neutron star that is produced will also have a mass of around $1.3-1.4M_{\odot}$. In other words most of the rest of the star (about $10M_{\odot}$ just prior to the explosion) gets blown out in the supernova. But of the $8.6M_{\odot}$ that makes into the interstellar medium, well over half is still in the form of hydrogen and helium; the minority will be carbon, oxygen, neon, silicon, iron etc., and only a very small fraction of that will have been transformed (by the r-process) into elements heavier than iron and nickel. 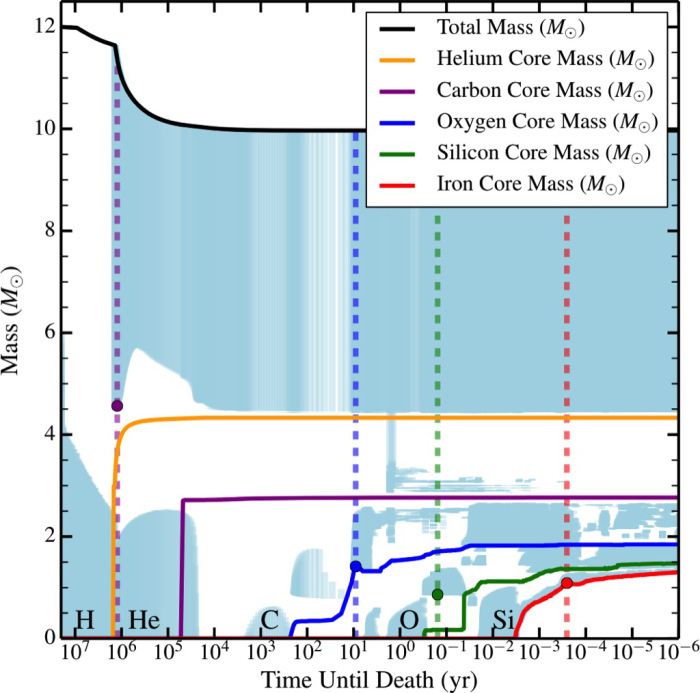 EDIT: Here is an even more awesome picture. The lower plot shows the relative mass fraction of each element as a function of enclosed mass as you work your way out from a 15 solar mass star (it has shed 2 solar masses during its evolution). The really awesome thing is that it is animated, so it shows you the first few moments after the core-collapse and how things start to change. Note that the outer $5M_{\odot}$ of the envelope is about half H and half He by mass prior to the core collapse. Lots of He and then O in the layers below that. The upper plot show how the density temperature and outward velocity are behaving. The image is from the website of Woosley and Heger (2007), a canonical work on the subject.

Hmm. I can't upload the animated gif. Here it is; well worth a look.

The fusion to make an element heavier than iron consumes more energy than what it produces, so when the "iron fusion" (creation of iron) process slows down significantly, the star collapses. This collapse causes a massive pressure and temperature increase in the core, which triggers the fusion of heavier elements; although it is a net loss of energy. This burst of energy blows the star apart. The difference between a nova and a supernova is the amount of fusion that happens before the core is blasted apart.

Since fusion only takes place in the core, and the core is less 1/100 the volume of the star, when the star goes nova (or supernova), the outer layer of the star is blown outwards.

Only a very small fraction of the elements in the core the supernova get converted into heavier elements. Most of the matter remains unchanged.

It's because it takes more energy to fuse iron into anything else than you get out of the reaction. The whole life of a star is a delicate balance of the release of energy by the process of fusion pushing out against the force of gravity and holding the start in a somewhat stable balance. It fuses Hydrogen into Helium which generates energy which generates pressure which pushes back against the force of gravity. Each successive phase of fusion releases less and less energy from the fusion, so it has to work harder and harder to keep everything up against the force of gravity. That's why each successive fusion lasts for a shorter and shorter time, because it has to fuse a lot more Helium faster to get the same amount of energy that it got from less Hydrogen fusion. So back to the supernova. It gets to Iron, suddenly it has no where else to go. Nothing else it can fuse is going to produce energy, boom all that energy that was holding the core up agains the force of gravity suddnely is not there. Gravity is left alone pulling the core together and the core collapses until it gets so dense that you can't pack anymore of into the space. Basically everything turns into one giant ball of Neutrons pressed together as close as they can be and the laws of physics say "STOP". Well everything else is still collapsing in at this wall of neutrons at, i've seen people say 10-20% the speed of light. It hits that wall and bounces back ripping out through the rest of the gas in the star in a shockwave. That shockwave creates really high temperatures and high pressures in the other layers of the star which can also cause fusion. As i understand this shockwave is the way that elements higher than Iron are actually created.

Not the answer you're looking for? Browse other questions tagged supernova nebula star-formation or ask your own question.

4
Where do new stars get their hydrogen from?

5
Why is iron responsible for causing a supernova?
7
Mechanism for Brown Dwarf Fusion
2
Fusion of elements inside heavy stars
2
Star formation: When a nebula collapses, is it only the gasses that form the star?
0
How could a supernova seed solar nebula?
30
Why don’t supergiants at least start to fuse nickel into even heavier elements before going supernova?
14
How can many stars be formed from the remains of one supernova?
5
How many generations of stars can be formed in the Stelliferous Era?
3
After a supernova, why don't new stars coalesce with higher heavier element content?