How close to Earth were the asteroids moving through this Hubble composite image?

What region of the sky is this, and how near were these asteroids to the Earth?

The photo is composed of multiple shots and the asteroids have copies because of Hubble's movement through frames as the photo assemblage shifted. 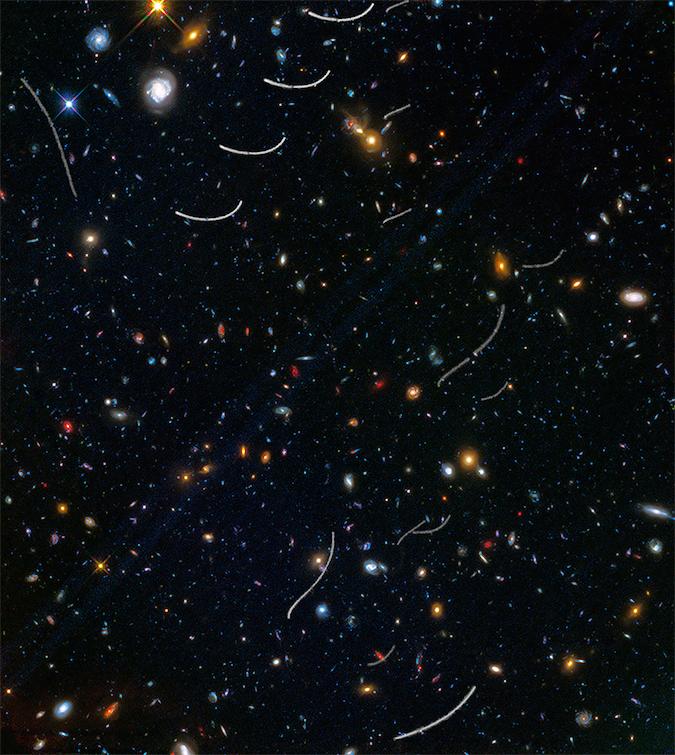 I visited the linked article in Astronomy Now and found the URL of the image contained the string STSCI-H-p1733a. STScI stands for Space Telescope Science Institute.

Searching that string leads to

The first paragraph of the caption contained in both of those links says:

Like rude relatives who jump in front your vacation snapshots of landscapes, some of our solar system's asteroids have photobombed deep images of the universe taken by NASA's Hubble Space Telescope. These asteroids reside, on average, only about 160 million miles from Earth — right around the corner in astronomical terms. Yet they've horned their way into this picture of thousands of galaxies scattered across space and time at inconceivably farther distances.

If the distance is about 160 million km, then they are suggesting these asteroids are in the inner part of the main asteroid belt.

The Earth is moving at about 30 km/sec around the Sun, and the Hubble Telescope is "only" moving 7.6 km/sec with respect to the Earth, in roughly the same direction. So much and probably most of the motion is due to the Earth's velocity. I'm suggesting this because if the distance to the asteroids is really roughly 160 million kilometers, then they would be near opposition to the Sun and the Earth's motion would be roughly perpendicular to the viewing direction.

There are a lot of asteroids! According to Wikipedia:

One hundred asteroids had been located by mid-1868, and in 1891 the introduction of astrophotography by Max Wolf accelerated the rate of discovery still further. A total of 1,000 asteroids had been found by 1921, 10,000 by 1981, and 100,000 by 2000. Modern asteroid survey systems now use automated means to locate new minor planets in ever-increasing quantities.

Asteroids are discovered constantly, and sometimes this happens in images that were not intended to be searches for asteroids, as in this case. While most most asteroids orbit close to the plane of the ecliptic, some of their orbits do stray substantially above and below it, as in this case.

While the date of the News Release is 02-Nov-2017, I don't know the time frame of all of the exposures that contributed to this final composite image.

Here is a screen shot of the Planetarium Mode of Dominic Ford's in-the-sky.org. The marker shows the position of Abell 370 just below the equator, and the Ecliptic is the thicker line above it. 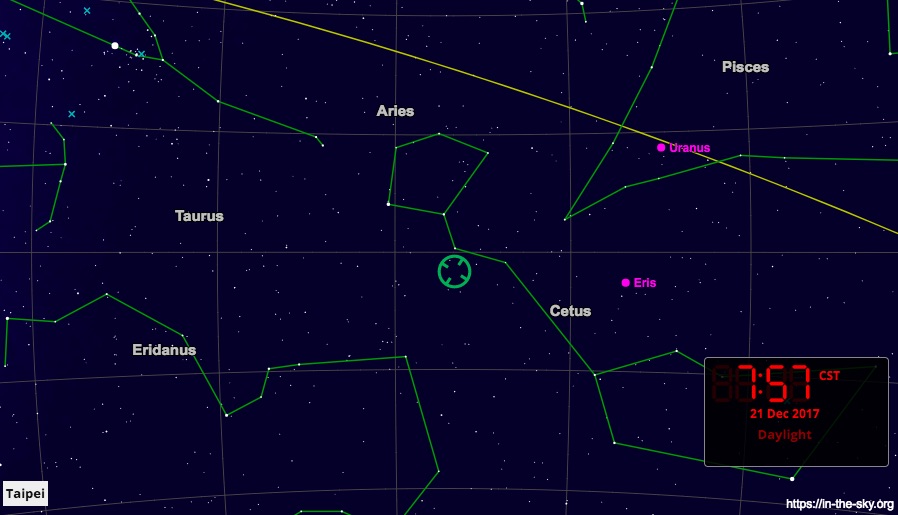 Not the answer you're looking for? Browse other questions tagged asteroids hubble-telescope or ask your own question.

3
What causes these asteroid trails to be so strangely shaped and repeated?

7
Is it possible to use Hubble Telescope to observe Earth in the past?
3
What are the dark spots in this Hubble image of the Crab Nebula?
14
What are the large round dark "holes" in this NASA Hubble image of the Crab Nebula?
2
Why is this HST WFPC2 image so much fuzzier than the WFC3 image of the same field?
0
Is this image captured by the Hubble Telescope an original image?
5
Has the Hubble ever been pointed at earth?
5
What were the odds that ʻOumuamua passed so close to the Sun?
16
What is the "lost light" in this unusual Hubble Deep Sky image?
4
Has Hubble ever been used to try to image a near Earth asteroid?