Flatness of the universe?

How does inflation explain why the curvature in the early universe was flattened out and now results in a flat universe?

This is really simple once you get it:

The usual analogy here is to look at the surface of a balloon (which is a surface in 3D space, rather than 3D space itself, but the analogy still works)

A partially inflated balloon has tight curvature, but as it is inflated, the curve decreases - the surface at any point becomes 'flatter'

From an article on this topic on scienceblogs.com: 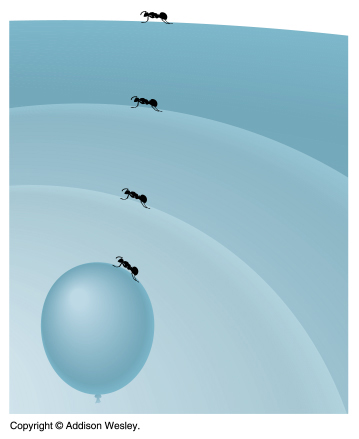 The universe has expanded a lot since the big bang - any curves, ripples or inconsitencies have largely been flattened, so it is difficult to detect them now. This article on space.com quotes:

The Harvard-Smithsonian study spotted gravitational waves as ripples in space-time possible left over from the rapid expansion of the universe (called inflation) right after the Big Bang nearly 13.8 billion years ago.

Curvature of spacetime is predicted by General Relativity and is a function of the density of the universe. Because inflation rapidly expands the volume of the universe it also rapidly decreases the density, so flattening space time.

One of the Friedmann equations describing the cosmological evolution of the universe is: $$H^2 \equiv \frac{\dot{a}^2}{a^2} = \frac{8\pi G}{3}\rho - \frac{k}{a^2}\text{,}$$ where $a$ is the scale factor describing by how much the space expands (related to the Hubble parameter by $H = \dot{a}/a$), and $k\in\{-1,0,+1\}$ is a parameter corresponding to whether the spatial curvature is negative, zero, or positive, respectively. Note that this parameter doesn't tell us the magnitude of the spatial curvature, only its sign, e.g., a very slightly positively curved universe would still have $k=+1$. Also, the cosmological constant is considered to be part of the energy density $\rho$.

Not the answer you're looking for? Browse other questions tagged early-universe .

11
Inflation cosmology: slow-roll inflation versus tunneling between two vacua
18
How do we know the big bang didn't happen in an existing universe?
4
Why are distant galaxies not visible in the observable Universe?
4
How did the reionization epoch make the universe "transparent"?
1
Why do we presume that the universe has always expanded?
1
How does science knows what is the early universe?
6
Why is the Cosmic Microwave Background evidence of for a hotter, denser early Universe?
2
What was the size of the universe around 400 million years after the Big Bang?