The other night, I observed what I believe must have been a satellite, however it was at 1:30am so I was not sure that this would be possible. Being in the Southern Hemisphere we are just past Summer Solstice, so theoretically it could have been reflecting the sun's light.

There were no flashing lights, just a star-like point of light. As it slowly traveled in a NE direction across the sky, it began to gradually fade as typical of a satellite passing into Earth's shadow.

Based on my observation, I'd like to get an understanding of the approximate minimum altitude of the object that I observed, allowing for it to be out of the shadow of the Earth sunlight. I'm not a mathematician, but using Space Engine with the correct time & location, I had to position the camera to some 7000km in altitude before the sun was visible over the horizon. The object was N to NE from where I observed it, whist the midnight sun would have been shining away at the South Pole.

I'll venture a guess that the 7000 kilometers (your software's camera position) was with respect to the center of the Earth. Using 6371 km as a value for the Earth's radius, that would make the altitude only 629 km, which it turns out is quite a popular altitude for satellites in LEO.

For the simplifying case of midnight, one can draw a simple diagram. I get

which is about 1400 km at midnight, and the height will be lower before and after.

I'll wait to hear about the camera "height" and try to find another tool for you to use. Do you ever use Python programming language?

Red dots are Perth at local noon and midnight. 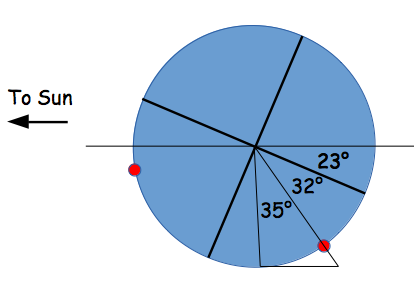 Not the answer you're looking for? Browse other questions tagged observational-astronomy satellite or ask your own question.

1
what is a MIA satellite
2
What would this moving point of light be?
2
Why do satellites with greater altitude travel at a slower speed?
1
Angle formed between a satellite, a ground station, and then another Satellite
3
Brightness, altitude & azimuth for satellites?
6
Is the Object in this Photo Mars?
3
Satellite?? Star?? I am puzzled over what I just saw