If we could travel far enough would we be able to see a constelation in reverse?

I am enjoying Orion high in the sky this winter as always. I wondered if I could travel beyond it, say 2730 light years* and turn around, would I see Orion in reverse? If so, what of the neighboring constellations. I know brightnesses would be different but would I recognize the shape?

Happy new year to all.

If the stars are all similar distance from us, like the Pleiades, then yes, you could find a place from where the stars would appear in a similar pattern and brightness, but the pattern would be a mirror image.

You can't do it when the stars are significantly different distances because they wouldn't look the same. Most constellations are a range of distances, which wouldn't look like a mirror image from any distance.

As others have said, Orion (and other constellations) only looks the way it does from a specific angle. The stars are distributed at different distances from Earth, so from a different position, including directly "behind" it, it would look quite different.

Here is a (terrestrial) example of something that looks different depending on the angle that it's viewed from (sidewalk "trompe l'oeil" art is popular in some cities). There's only one position where it has the intended effect; even from the same angle, being closer or further would break the illusion. 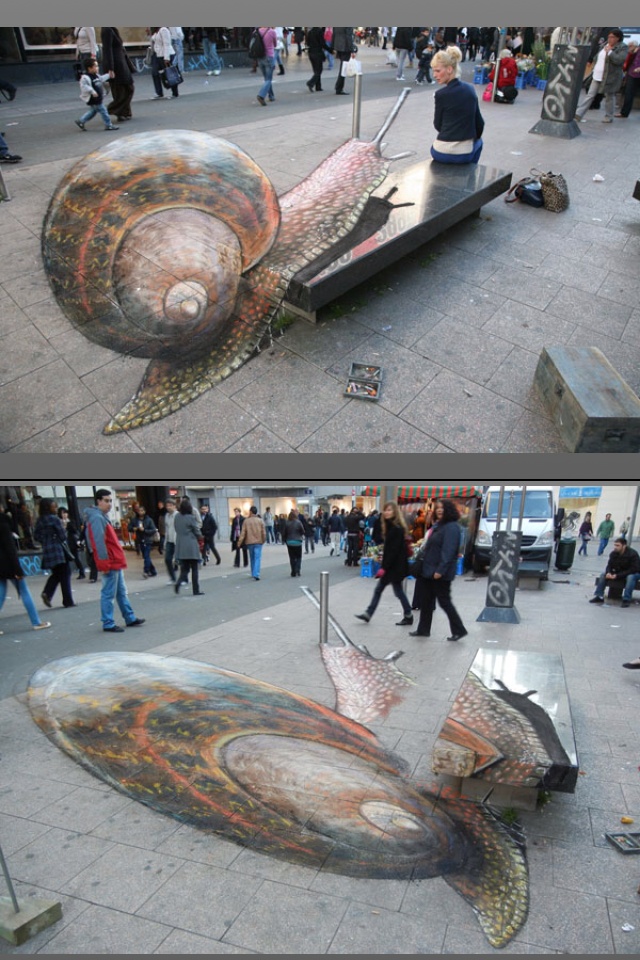 It depends on if the stars in the constellation are lined up, on a plane or on a sphere. If they line up as a plane, traveling the distance you are from the plane, to the other side, it should look reversed. However, if its lined up on a sphere, it may look distorted, how the inside of a sphere looks to the outside. And if the distances vary enough, it might look somewhere in between or distorted in another way. Typically the distances vary greatly. Heres a nice picture of the kinds of distortion (note that stars almost never line up in any way, distance-wise, in constellations, so this is just mainly for the general idea): Link

Pack orion in a cuboid of custom dimensions & make sure maximum number of stars touching the faces of cuboid from inside. Make a normal (perpendicular line from the face) reaching earth and then extend the line to other side of the cuboid such that cuboids centre is the centre for the line. Be careful going to another end ;)