Which is the most early type star with a planet discovered by radial velocity method?

We have discovered planets in Beta_Pictoris(A6V)here and Fomalhaut alpha(A3v)here.
However they were discovered by direct images.

There should be an stellar type limit by RV?
What is the most early type ever found?

HD 103774 b, detected by radial velocity, orbits a star of spectral type F5V according to The Extrasolar Planet Encyclopeadia.

The entry for Kepler-88 c around a spectral type B star (according to the catalog as of May 2014) appears to be incorrect, or encodes something else, the star should be classified as spectral type G6V.

The answer to this, and other questions of its kind about exoplanets, can easily be found at the website http://exoplanets.org/ This site contains a very authoritative catalogue of exoplanet discoveries and has tools to enable tables and plots of many variables to be constructed.

For example, to handle your question, I produced the following plot for exoplanets discovered using the doppler radial velocity technique. This shows effective temperature of the parent star on the x-axis, versus projected exoplanet mass $M\sin i$. The the hottest star with an RV-identified exoplanet (on the website, you can click on the points) is HD113337, an F6V-type star discovered by Borginiet et al. (2013). The next hottest is HD103774, which is given a slightly earlier spectral type of F5V. These two are joint hottest within their uncertainties. Just a touch cooler is Tau Boo. 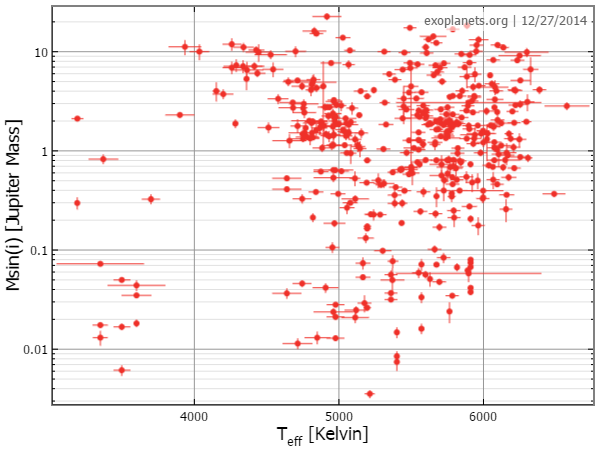 20
Hypothetical trans-Neptunian planets orbiting the Sun
3
Isn't it likely that most extra solar planets don't transit their star in line with the Earth?
3
Is it thought that the majority of Earth size or larger terrrestrial planets have retained most of their original atmospheres?
5
What if we are looking for the wrong signs of life on other planets?
2
How big are the rocky/icy cores of Jovian planets?
2
High quality, detailed images of planets on web
16
Characteristics of the first planets in the Universe?