Is it fruitful to search for a correlation between rates of in-falling matter in black holes and the expansion rate of our universe? [duplicate]

To my understanding, white holes are hypothetical objects that are time-reversed black holes; black holes gravitationally "suck in" matter whereas white holes "spit" matter back out. As such, I think it's a nice idea that the Big Bang could be the "spitting of matter" via a white hole (assuming such an object exists).

This got me wondering how one could experimentally test for such an object. Since the expansion rate of the universe is increasing, could one possible explanation be that a white hole is continually "spitting out" matter such that an increase of flux of in-falling matter/space could be observed as an increasing rate of expansion of out-pouring matter/space? While I don't know of a way to detect this, I was wondering whether the following idea was fruitful or not.

Given that a supermassive black hole is believed to be at the center of every galaxy, given that most galaxies (sans Andromeda) are receding away at a speed proportional to their distance relative to us observers, and given that the spatial distribution of matter in our universe is isotropic and homogeneous, could one build a simulation of such a concept? To emulate isotropy and homogeneity, one could use a random number generator corresponding to a uniform distribution to place "galaxies" along a grid; accounting for gravitational forces, one can simulate the time-evolution of these galaxies and compare rates of in-falling matter to find a correlation between the rate of in-falling matter and the expansion rate of the universe (likely as a function of time-elapsed, and age and size per black hole). While the simulation does not definitely prove anything, providing a correlation could be interesting in my opinion.

Is this a stupid idea, or is there a potential to build upon this idea? If it is not fruitful, I am curious as to why.

As a layman, I can tell you that there are some issues with your proposal.

The biggest one is that White holes probably don't exist. They're purely theoretical and, even worse than that, they're mostly not even well defined theoretical objects. For a physical hypothesis to work, every element of the theory needs to be precisely defined. White holes aren't well defined. (now, let me add that, perhaps White holes are well defined by Einstein's field equations, I'm not sure, but the specifics go above my paygrade).

And running time in reverse, a black hole really doesn't look anything like a big bang, and, granted, we don't know what the/a big bang looked like, but we know what a black hole swallowing matter looks like. It absorbs matter by accretion disk and it shoots out jets along the accretion disks axis. Running time backwards you can see streams of matter and the accretion disk reforming into stars and dust that flies away from the black hole but that gravitational consumption in reverse That looks NOTHING like the big bang is thought to have looked.

The moments after the big bang are believed to have been a very hot, dense and rapidly expanding quark/photon/fundamental particle soup kind of thing. Nothing in today's universe, backwards or forwards in time, looks anything close to that, so running time backwards doesn't really help.

The very early universe and the ratio of hydrogen to helium and the presence and near perfect uniformity of the background radiation all imply a mostly uniform, very hot, very dense, and only the slightest bit lumpy rapidly expanding origin, that only works under modern physical laws if space expands faster than the speed of light.

We can re-create those conditions, but only for the tinyest fractions of a second, and with only a handful of particles, in particle accelerators. You might think that inside a black hole, similar conditions exist, but that's not entirely true. Inside a black hole, gravity is dominant. Due to faster than light expansion and uniformity, it's not believed that gravity was a dominant force in the moments after the big bang. It was a force, but not a dominant force. The space of space-time, for example, is very different inside a black hole than in the moments after the big bang.

A final issue with your question is whether the big bang was an explosion, or, more specifically that it originated from a source-point-origin at all, (as it's often presented), or whether it was an expansion that took place everywhere (everywhere stretch, so to speak).

A theoretical white hole ejecting matter would be a source point and a source point is subject to the inverse square rule and we'd expect to see a variation in density and evidence of a direction towards the origin. We don't see that. The observable universe appears remarkably homogeneous, which is only possible, from a source-point, if the size is enormously large. The rate that distant galaxies move away from us is also very difficult to explain without some kind of dark energy expansion.

The variations in the image are exaggerated. The cosmic background radiation is very homogeneous, implying we were inside the expansion, not part of some material that was ejected. 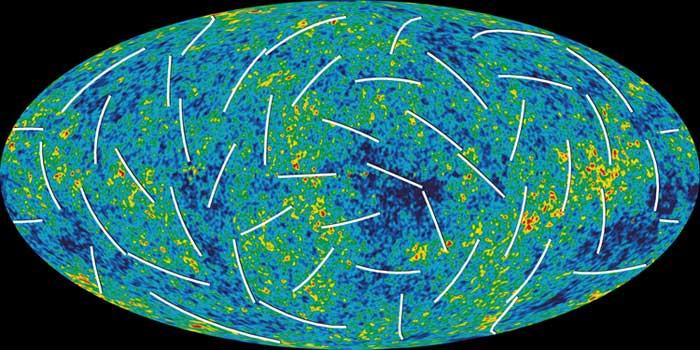 I realize that you didn't say explosion specifically, but asked about a source object ejecting material, but both have a similar effect. Ejected material spreads out from it's source. The universe doesn't appear to have been formed in that way. Nice summary of the expansion theory here.

That's my layman's understanding anyway and I'm not sure I should have gone there. Origin of the universe questions are kind of out there.

Not the answer you're looking for? Browse other questions tagged black-hole big-bang-theory expansion white-hole or ask your own question.

1
Does a White hole lies behind a Black hole?

4
What would happen if a Black Hole and White Hole Collided?
0
Is nucleosynthesis responsible for the expansion of the universe?
13
Are black holes expected to contain the same ratio of dark matter to regular matter as the rest of the universe?
1
Does a White hole lies behind a Black hole?
1
Universe and black holes
3
If one galaxy were to collide with another, what would it look like to an immortal inhabitant of one of their planets?
2
How is the expansion rate of the universe obtained from Baryon Acoustic Oscillations?
0
Any theories about universal expansion due to action at the universal event horizon?