"Researchers have largely put to rest a long debate on the underlying mechanism that has caused periodic ice ages on Earth for the past 2.5 million years – they are ultimately linked to slight shifts in solar radiation caused by predictable changes in Earth's rotation and axis."

How do we know that the amount of solar irradiation has increased since the ice age. Do current changes in the orbit path still cause the average temperature to still be increasing until another such event causes another orbit change?

This appears to be the article.

They found in 1976 that the axial tilt and precession changes matched the geologically known ice age time periods. (see this pic for precise details)

The graphs say the world will get a tiny bit warmer for a few hundred years and then colder, if it weren't for CO2 being at the highest level for many million years: 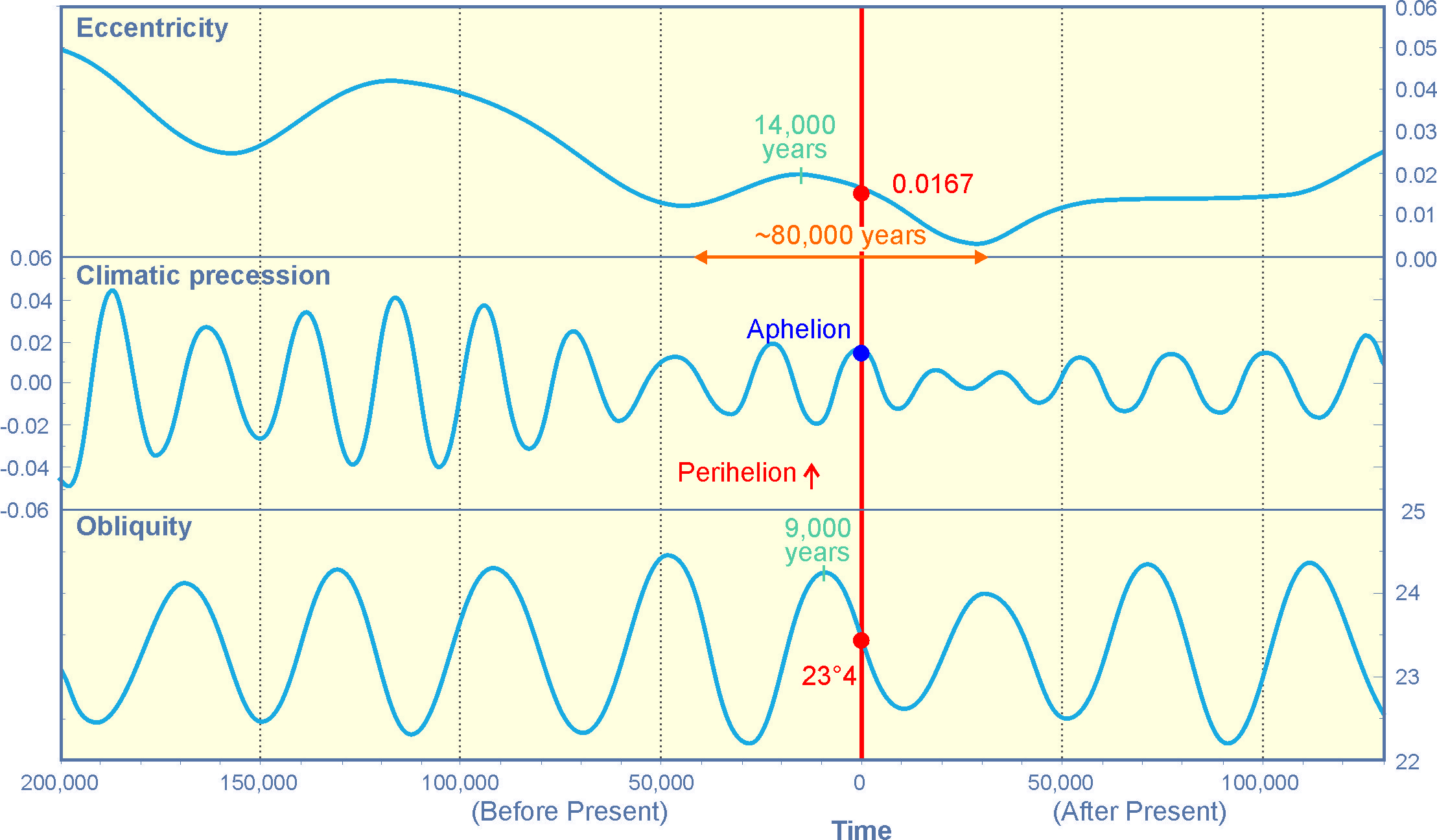 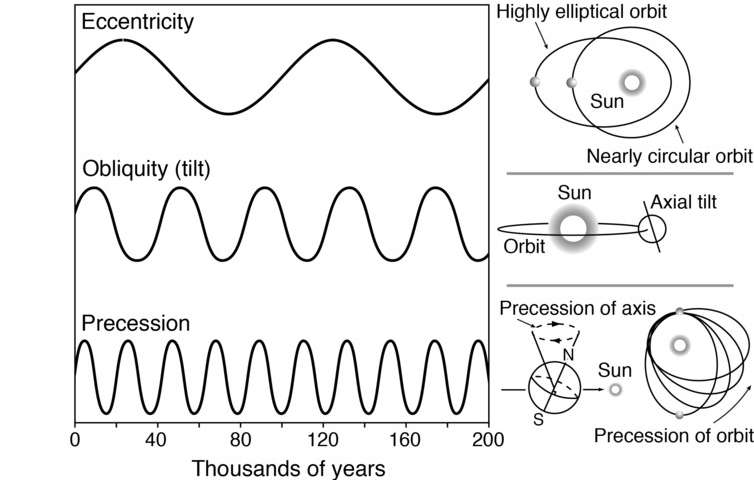 How is it measured? It's mostly straight mathematics, say if the earth is 10% nearer to the sun it casts a larger shadow into outer space and collects more solar radiation.

This figure is developed from A.L.Berger, 1978, Long Term Variations of Daily Insolation and Quaternary Climatic Changes, Journal of the Atmospheric Sciences, volume 35 (12), 2362-2367. 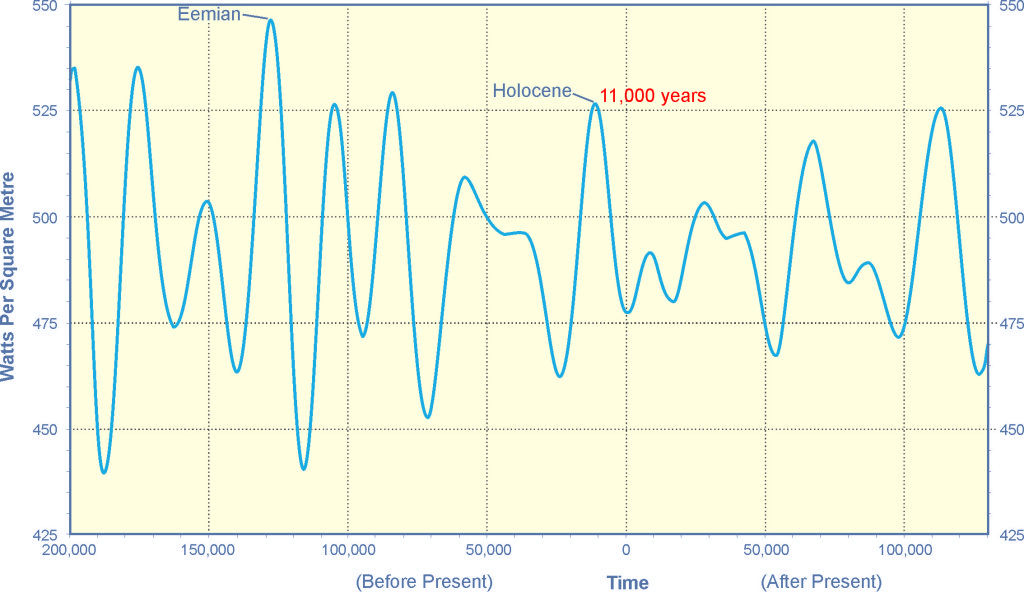 The effects of galactic cosmic rays on the atmosphere (via cloud nucleation) and those due to shifts in the solar spectrum towards the ultraviolet (UV) range, at times of high solar activity, are largely unknown. The latter may produce changes in tropospheric circulation via changes in static stability resulting from the interaction of the increased UV radiation with stratospheric ozone. More research to investigate the effects of solar behaviour on climate is needed before the magnitude of solar effects on climate can be stated with certainty.

The other answer is very good, but just to touch on a few details.

During summer, the sun is higher in the sky and stays out a longer percentage of the day and in winter, the period of daylight is shorter and the sun is lower. That drives the seasons, as I'm sure you knew. The tilt favors one hemisphere or the other, so when it's winter in the Northern Hemisphere, it's Summer in the Southern. The total solar energy doesn't change, but the angle that the Earth tilts towards or away from the sun matters a lot. It's the difference between winter and summer.

Summer and winter still happen during ice ages, but the variation of the angle of the sun increases with an axial tilt increase (up to 24.5 degrees) and decreases when the tilt decreases (22.5 degrees) - see obliquity in the chart below. That creates a larger fluctuation between the seasons. 22.5, milder seasons, 24.5, more extreme seasons.

This hemisphere that gets more heat matters because the Northern Hemisphere has a lot more land and the Southern, a lot more ocean. When more sunlight hits land, land wars up. When more sunlight hits ocean-water oceans heat more slowly, but you also get evaporation and circulation. Oceans are very effective heat sinks, they warm slowly during the summer and cool slowly during the winter.

Similarly, it's the way the Earth is tilted and when it's tilted that drives ice ages. Glaciers also grow and melt slowly, so it's a gradual period of transition. The Earth's response to these orbital changes takes some time. a couple thousand years or more.

As a general rule, ice ages begin and grow when Northern Hemisphere summers are colder. Colder summers allows fallen snow to stay longer, and where the snow survives the entire summer, that's when it can begin to accumulate and grow and you get glacial expansion. When Northern Hemisphere summers are hotter, the reverse happens and glaciers begin to retreat.

Because there's nowhere for ice to grow in the SOuthern Hemisphere, besides ANtarctica where it's effectively permanent, the Southern Hemisphere variation doesn't matter. It's pretty much only the Northern Hemisphere Summer that determines if glaciers will grow or shrink.

You get some glacial buildup in some locations in the Southern Hemisphere like Mt. Kilimanjaro and some glaciers in South America, but nothing large enough to make an ice age. Ice ages, currently are a Northern Hemisphere event.

The Northern Hemisphere Summer variation is largely driven by two Milankovich cycles, Axial Tilt and Axial Precession/Apsidal Precession, which effect the same thing. Tilt and Precession can add up or cancel each other out. The 3rd cycle, Eccentricity is the only cycle that actually does change the total energy the Earth receives and it can enhance or reduce the other two. As the other answer explains, it's just math, and how these 3 cycles add up, though both precession and Eccentricity aren't neat cycles, there's some stretching and squashing of the wavelengths, only Axial Tilt operates like clockwork. The effect is a somewhat messy, almost chaotic looking rise and fall of Northern Hemisphere Summer TSI.

So, to get back to your question, the total amount of solar radiation hasn't increased much, if at all, since the end of the last ice age and that's not the key factor anyway. It's the Northern Hemisphere summer radiation that matters most and that's actually been decreasing for the last 11,000 years since the last ice age, not increasing. Glaciers take a long time to melt and there are various feed back mechanisms also in place, so temperature doesn't neatly follow the variation. There's usually thousand to a few thousand years lag-time, and smaller variations might have little to no effect at all.

One way to think about it Think of a see-saw that requires a kick to move. Cold wants to stay cold and Warm wants to stay warm. Like the kid on the bottom of the sea-saw leans backwards and so angular momentum keeps him on the ground and he needs to kick upwards for the seasaw to move.

For a shift to occur and glaciers to reverse, the solar variation needs to be enough to trigger a change over and above any feedback mechanisms in place. That's why ice ages don't neatly follow the variation. It's also why CO2 lags behind temperature, but that's another discussion.

Do current changes in the orbit path still cause the average temperature to still be increasing until another such event causes another orbit change?

Currently Earth is in a relatively flat period in Northern Hemisphere Summer TSI. Over the last 10,000 years or so, the Orbital changes have actually been cooling the Earth and beginning in the next couple thousand there will be a slight warming trend. Orbital changes are not currently warming the Earth, they should, very slightly, have a cooling effect.

You can see a nice display of the warming followed by cooling of the Earth in this chart here. While it's got some cartoonist comments, it's actually a very good and science supported chart.

And borrowing the chart from the other answer,

You can see that the peak Northern Hemisphere summer solar radiation occurred around 11,000 years ago, but the temperature didn't peak until around 9,000 years ago. As I mentioned above, this is because the Earth is slow to respond to the somewhat small orbital variations and because glaciers take a long time to melt.

The current level of peak glacial melt and peak sea level wasn't reached until a bit less than 8,000 years ago. 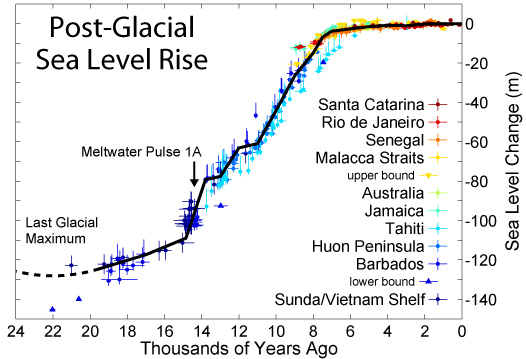 For the last 11,000 years the Northern Hemisphere Summer TSI has been decreasing. More recently and for the next couple thousand years there's been a leveling off and after that, in two thousand years or so, there will be a turn towards warming again, lasting 15,000 years or so.

No major orbital effects are anticipated for several tens of thousands of years, also noted in the other answer that we're in the middle of an unusually long between ice ages period, and any chance we might see a mini-ice ages have been thwarted by our greenhouse gas output. These charts on orbital variation and Northern Hemisphere summer TSI are effectively moot with 400 PPM CO2. They really only apply with pre-industrial levels. 400 PPM CO2 is probably enough to prevent any chance of an ice age.

The low points on the chart indicate a cooling push and the higher points a warming. We're not do for a somewhat significant orbital cooling trend for about 60,000 years.

Minor point: The Earth has been in an ice age for the last 2.6 million years, and still is in that ice age. You are asking instead about solar irradiation since the most recent glacial period. This distinction is not just semantic. The Earth has been hot during much of the last 2.5 billion years. During those hothouse Earth periods, palm trees have grown even in polar regions (but obviously not a couple of billion years ago), with snow and ice only occurring at extremely high elevations.

Major point: Solar irradiation at the top of the atmosphere has not increased since the end of the last glacial period. What has changed is the amount of solar irradiation at the Earth's surface at high northern latitudes during summer. The northern and southern hemispheres currently have very different distributions of land mass. The far north, with the exception of the Arctic Ocean, is mostly land, while the far south, with the exception of Antarctica, is mostly ocean.

As explained in the other answers, the Milankovich cycles rank very high amongst the factors that drive those 65° N summertime temperatures. Other factors include