Can we see the stars at the edge of the Milkyway?

This question proved much more difficult to formulate than I initially imagined. It concerns how far out in the Milky Way that we actually see with different telescopes. I know the Milky Way disk is about 100k light years wide, its halo a couple of times that wide, and most of the naked eye stars are within 1000 light years. I also know that when many stars are close together they are more visible, which means we can easily see for example the double cluster in Perseus at about 7000 light years with our naked eyes. But if you take a large telescope and peer into the distance, how easily do you see through the star fields until the point where you have no more foreground stars in the field of view, and all that is there are the numerous faint galaxies lurking in the back. For example, in the Hubble Deep field you see a few stars. Are we looking at the last few stars at the edge of the Milky Way, or are there more hidden in the field that we can't see because they are too far away/too faint?

I realize that there are dust clouds in the Milky Way obscuring the view, so if you look towards the galactic center you would definitely not see all the way to the other side. But lets assume we're looking perpendicular to the galactic plane. Lets also say that you're using a 16" telescope, allowing you to see maybe down to the 15th magnitude. Do you see the stars at the edge of the galaxy?

Another way of approaching the question... From what I've read it seems we estimate the Milky Way to contain about 250 billion stars. I also read that the Gaia satellite will map about 1 billion stars. Does that mean our best telescopes are only able to discern 1/250 of the stars in the Milky Way? Of course all stars on the other side the galaxy disk are hidden from us, so they surely account for a large portion of the invisible stars. But looking straight up from the galactic plane, can we see the last galactic stars before the empty intergalactic "void"?

Take a look at the HR-diagram. You have forgotten to take into account that stars come in vastly different luminosities.

For example, we can barely see all red dwarves out to a distance of 10pc, while we know that they vastly outnumber the more luminous stars.

The luminous red giants however we'll be able to see on side of the edge of the disc, but even Gaia will not be able to look through to the other edge. It's limit magnitude is 20, while extinction through dust in the direction of the galactic center is often cited to be up to 100th magnitude.
Hubble deep field galaxies for comparison are around 30th mag.

However, there is Baade's window, a region just above the central galactic plane that has low dust content on our line-of-sight there. We'll be able to spy quite some stars there.

If you're interested in the Gaia mission, you can find information here.

We can see at least some of the stars on the edge of the Milky Way. With Gaia, we now have not only the position, but also motion data for 1.7 billion stars.

This means we can see e.g. small clusters like Ant 2 hiding behind the Milky Way.

Perhaps the most valuable of these is the wealth of high-quality all-sky proper motion (PM) information. Gaia’s astrometry makes it possible to filter out nearby contaminating populations, revealing the distant halo behind them.

This is Ant 2, which can be separated from the foreground stars thanks to the proper motion data supplied by Gaia. 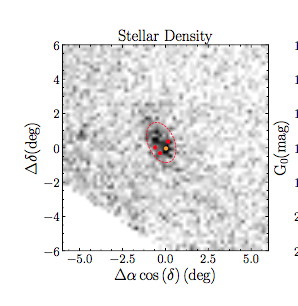 Gaia was used to study the halo of stars around the Milky Way:

Amina Helmi and colleagues published a study titled “A box full of chocolates” in which they began to reveal the rich structure of the Galaxy’s stellar halo. The halo is the cloud of stars that surrounds the main disc of the Milky Way. Its structure reveals the formation processes of the Galaxy. The investigation of this structure was one of the prime motivations for building Gaia in the first place. An immediate surprise was the discovery of a large population of stars that orbit the Milky Way in the opposite direction to most stars. These `ghost rider’ stars probably came from a smaller galaxy that was cannibalized by the Milky Way.

Gaia was designed to map all visible stars down to magnitude 20.5, with an initial estimate of 1 billion stars. M 20.5 is pretty dim, but an even more sensitive camera would be able to see more stars.

During its anticipated lifetime of five years, Gaia will observe each of its one billion sources about 70 times, resulting in a record of the brightness and position of each source over time.

By Data Release 2, Gaia has already mapped 1.7 billion stars and has proper motion for 1.3 billion.

Not the answer you're looking for? Browse other questions tagged star galaxy distances milky-way magnitude .

7
Why don't we see more supernovae in our galaxy?
12
Why don't we see "the milky way" in both directions?
6
Are the stars outside of the galactic plane in the galactic halo?
2
If someone was above the galaxy, how much of it can he see?
8
How did the object CO-0.40-0.22 get its name, and how is it distinct from CO-0.40-0.22*?
14
What will happen to the shape of a galaxy when a super massive black hole lying in its center dies(evaporates out)?
1
Can we learn anything from observing galaxies edge-on, like the Spindle Galaxy?
2
How do disk-shaped galaxies then form at the sites of spherical galactic halos? Do the halo stars start orbiting or just sit in place?
29
What are the odds that the Sun hits another star?